US wildland firefighting force urged to get vaccinated 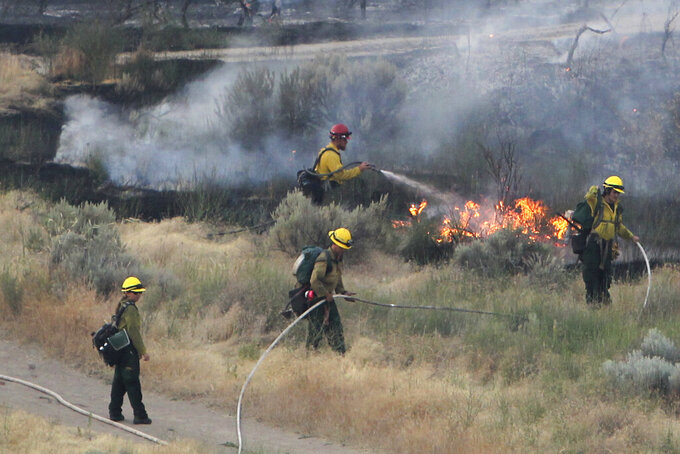 FILE - In this June 30, 2016 file photo firefighters respond to a wildfire near the Morningside Heights neighborhood near Table Rock in east Boise, Idaho. With a potential ferocious wildfire season ready to ignite across the western U.S., the push is on to persuade state and federal wildland firefighters to get vaccinated against COVID-19. Republican Idaho Gov. Brad Little said Tuesday, May 18, 2021, that lives could be lost if frontline firefighters get sidelined with the illness. (Joe Jaszewski/Idaho Statesman via AP, File)

BOISE, Idaho (AP) — With a potentially ferocious wildfire season threatening to ignite across the western U.S., a push is on to persuade wildland firefighters to get vaccinated against COVID-19.

Republican Idaho Gov. Brad Little said Tuesday that lives could be lost if frontline state and federal firefighters get sidelined with the illness as tinder-dry conditions prompt state officials to brace for the worst.

Little made his remarks said during a meeting of the Idaho Land Board, which manages state-owned land, much of it forested.

The U.S. Bureau of Land Management held a virtual town hall last week that included an emergency room doctor urging crews to get the vaccination.

At least two states, Texas and Alaska, are requiring firefighters to get a rapid test for the coronavirus before being allowed into the state to fight fires.

The national Drought Monitor shows 84% of the West is in drought conditions, with 47% in extreme or exceptional drought.

“We’re not in a good position currently,” said Dan Smith, one of seven members of the National Multi-agency Coordinating Group at the center. “It will all be weather-dependent, but it’s looking like another tough season.”

Smith, who is with the National Association of State Foresters, said he and his colleagues representing federal agencies and tribes will be discussing policies surrounding COVID-19 later this week.

“Most of the people I work with have been vaccinated,” he said. “But I’m in the later stage of my career, and I don’t hang out with the young, on-the-line firefighters.”

With the vaccination rate among firefighters unknown, fire camps will operate like last year with multiple precautions to reduce coronavirus infections.

“All that added cost would not be necessary if everybody got vaccinated,” Little said.

Little has been vaccinated and encourages others to get vaccinated as well. But in April he issued an executive order banning state government from requiring or issuing so-called COVID-19 “vaccine passports.” The order also prohibits state agencies from providing information on people’s vaccine status to other people, companies or government entities.

Idaho has one of the lowest vaccine rates in the nation at 31% despite the vaccine being widely available.

Little asked state officials to find out how many of the state's wildland firefighters have been vaccinated, but it's not clear if the state has those numbers. Sharla Arledge, spokeswoman for the Idaho Department of Lands, said the data was not available Tuesday.

Jessica Gardetto, a fire center spokeswoman with the U.S. Bureau of Land Management and a former wildland firefighter, said efforts to persuade firefighters to get vaccinated could be working.

“We’re just hearing that, overall, the wildland firefighter workforce wants to be vaccinated because it's just going to make everyone safer,” she said.