USA on brink of clinching spot in 2023 Basketball World Cup 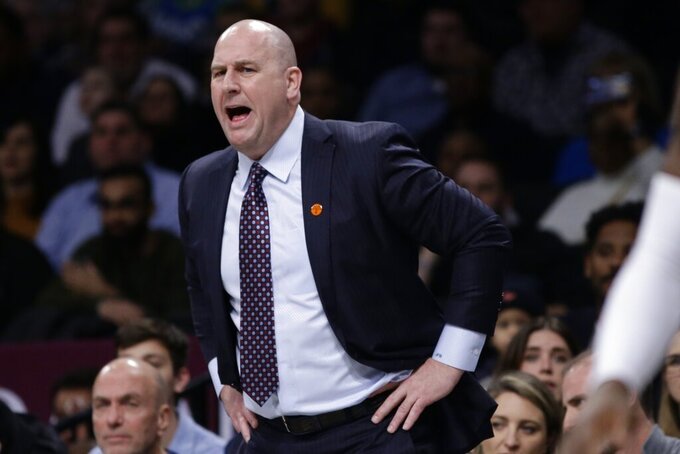 FILE - Chicago Bulls head coach Jim Boylen calls out to his team during the first half of an NBA basketball game against the Brooklyn Nets on Jan. 31, 2020, in New York. Boylen and USA Basketball can clinch a spot in the 2023 World Cup by beating Brazil in a qualifying game on Friday, Nov. 11, 2022, in Washington. (AP Photo/Frank Franklin II, File)

Jim Boylen has not spent any time thinking about what the World Cup qualifying standings might look like after USA Basketball’s game against Brazil on Friday.

He just keeps thinking how the Americans have four qualifying games left.

“And in my brain, I’m acting like we’ve got to win four to get in,” Boylen said.

He knows differently. The U.S. (7-1 in qualifying) can clinch a berth in next year’s World Cup with a win Friday, when it hosts Brazil (5-3) in Washington. The national team will be wearing the nation’s colors in the nation’s capital on Veterans Day, with a chance to lock up one of the 32 spots for the tournament to be played next summer in the Philippines, Japan and Indonesia.

For the U.S., qualifying started nearly a full year ago in late November. For some teams in the FIBA Americas region, it started in April 2021.

It’s been a long road, but Boylen and the Americans are finally in position to clinch.

“It’s never easy,” said Boylen, who has coached the eight previous U.S. qualifying games — all held in two-game windows, often with a different roster each time. “Expect the unexpected. Expect to make adjustments. You just roll with it, keep it simple. I believe we have to be superior at the defensive end of the floor. You hope shots go in, but we have to defend and rebound. That’s what we can control.”

The World Cup provides the most direct path for teams to qualify for the 2024 Paris Olympics. The Americans have used primarily G League players in qualifying games; those players know top NBA players will take their roster spots in the World Cup and the Olympics.

“It’s very humbling when we have repeat guys and they said, ‘Yeah, Coach, I loved it and I want to be part of it,’” Boylen said. “It’s really hard. It’s almost a thankless job. If we win, nobody talks about it and if we lose, it’s on the ticker. But I don’t sell it like that. I sell it as, in the last 30 years, there are 293 guys who have worn the senior men’s national jersey. They’re part of the most elite group of guys in the history of the game. People don’t realize that.”

The Americans have used 37 different players so far in the qualifying cycle. That number will rise Friday; only five players on the roster for both the Brazil game and Monday's game against Colombia have appeared in 2023 qualifying.

Langston Galloway, DaQuan Jeffries, David Stockton, Will Davis II and Michael Frazier II all have played with the U.S. previously in this qualifying cycle; Galloway has the most appearances with six. The rest of the roster is Charlie Brown Jr., Chris Chiozza, Rodney Hood, Alize Johnson, Elijah Pemberton, Henry Sims and Craig Sword.

There are 12 teams remaining — two groups of six — from the Americas region, all vying for seven World Cup spots.

The U.S. leads its qualifying group (Group F) by two games with four remaining on the qualifying schedule; the last two-game window of qualifiers is in February. Brazil, Mexico and Uruguay are all 5-3; Puerto Rico is 4-4 and Colombia is 3-5.

The top three teams in each Americas region group, along with the best fourth-place team, will receive World Cup berths. The World Cup draw takes place in Manila in March and the tournament runs from late August through mid-September.