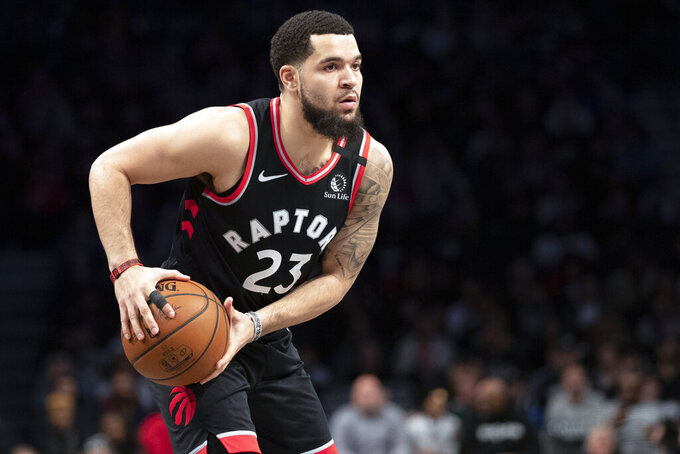 FILE - In this Jan. 4, 2020, file photo, Toronto Raptors guard Fred VanVleet looks to pass the ball during the first half of an NBA basketball game against the Brooklyn Nets in New York. VanVleet agreed Saturday, Nov. 21, 2020, to a four-year, $85 million contract to remain with the Toronto Raptors, a person with direct knowledge of the discussions told The Associated Press on condition of anonymity because the contract remains unsigned. (AP Photo/Mary Altaffer, File)

Fred VanVleet hasn’t been back to Toronto since March and isn’t sure when he’ll be back to the city that he’ll technically be calling home for at least the next four years.

In the interim, warm weather will suit him just fine.

VanVleet — the guard who finalized his four-year, $85 million contract to remain with the Raptors on Tuesday — said he’s excited for the team’s looming temporary move to Tampa, Florida. Toronto will play its home games for at least the first part of this season in Tampa because of the ongoing coronavirus pandemic and how the U.S-Canada border remains closed to non-essential travel.

“Toronto has turned into my second home, so obviously we miss the city but I think we’ve got to be excited about what’s ahead of us,” VanVleet said. “I can’t not be excited. It won’t make the experience that great. So, we were in Florida for a while with the bubble in Orlando and right back there in Tampa, so hopefully it’s a good experience.”

For the second time this year, the Sunshine State becomes home-away-from-home for the Raptors. They were in Fort Myers, Florida in June for training camp before moving to the restart bubble in Lake Buena Vista, Florida -- near Orlando -- for the resumption of the regular season and then their Eastern Conference playoff matchups against Brooklyn and Boston. They left the bubble in mid-September after being eliminated by the Celtics in the second round, and not even three months later, they’re headed back for training camp and soon a new season.

The bubble had no fans until the NBA Finals, and that was limited to basically just player family members. The ticketing situation for Raptors’ “home” games in Tampa remains unclear, and some NBA teams have already said they’ll open the season with no fans in the seats.

“I think it’s less of a sting because we haven’t played in front of fans in so long, but also once we knew that Toronto was up in the air as far as us being able to return, I was just happy that it was somewhere warm,” VanVleet said. “So, Tampa is right there and, and hopefully we’ll spend our time there and do what we got to do and then make our way back to Toronto at some point.”

Keeping VanVleet — who averaged a career-best 17.6 points last season and was a key part of the Raptors’ run to the 2019 NBA championship in Kawhi Leonard’s lone season with the team — was a top priority for Toronto this offseason. The Raptors will look different; Marc Gasol went to the Los Angeles Lakers and Serge Ibaka to the Los Angeles Clippers, and VanVleet is of the belief that the Raptors are being written off again in the same way they were in past years.

“I’m excited about what we’ve got,” VanVleet said. “I think we’re kind of headed back in a direction where we were pre-Kawhi, where people are overlooking us again — which is not a bad place to be in. So, we’ve got a lot of work to do and we’ve got to get a lot better as individuals. We’ll roll out there and see what we can do. I’m excited. I can’t wait to get back to work.”