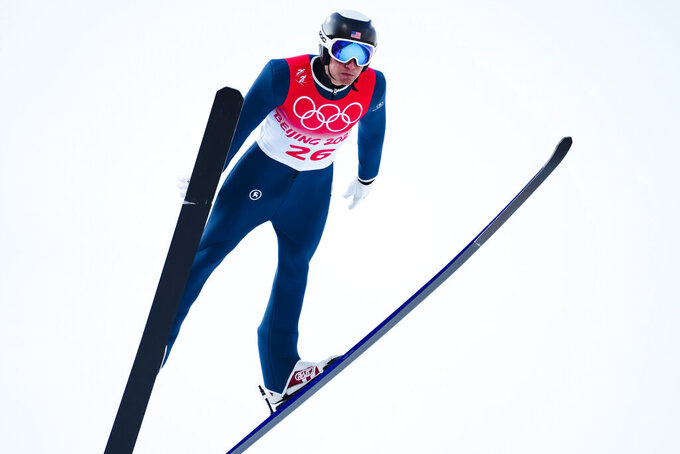 Ben Loomis, of the United States, soars through the air during a trial round in the ski jump portion of the individual Gundersen normal hill event at the 2022 Winter Olympics, Wednesday, Feb. 9, 2022, in Zhangjiakou, China. (AP Photo/Andrew Medichini)

“I did not believe that it’s possible to get the gold medal,” he said. “I thought about the bronze medal before the start.”

Joergen Graabak of Norway finished eight-tenths of a second behind, winning silver. Lukas Greiderer of Austria earned bronze after starting the cross-country skiing phase of the competition in second place.

When Greiderer crossed the finish line, he collapsed and briefly passed out.

“I was so exhausted that I couldn’t even be happy,” he said. “I just lay down and everything was black. Then, I took at look at the scoring wall and saw I was third and I said, ‘I did it.’”

Germany won gold in each of the three Nordic combined events in South Korea four years ago, including the team event that included Geiger.

Ryota Yamamoto of Japan jumped 108 meters (354 feet) and had 133 points in the first part of event, giving him a 38-second lead over the pack, but faded from contention halfway through the grueling cross-country race.

In the sport that forces athletes to have ski jumping and cross-country skiing skills, the athlete who jumps the farthest and impresses judges the most gets to start the cross-country portion of the Nordic combined with a lead.

The rest of the field follows, in order of the finish in ski jumping. The athlete who crosses the finish line first wins gold, and that was Geiger.

“On the third lap, I felt good and my skis were really good and I thought, `OK, if you want to have a medal, then you have to attack now,’” he said.

Four of the top seven Nordic combined athletes, including second-ranked Jarl Magnus Riiber of Norway, recently tested positive for COVID-19 and did not compete on the normal hill and 10K race.

“It’s a really good for the team to see that we’re not only the Jarl Magnus Riiber team,” Graabak said. “We really, really hope to have Jarl Magnus back on the big hill.

“We have to celebrate on FaceTime, but I’m sure we will.”

“It’s been a rough week for the team,” Graabak said. “I’ve been in quarantine, just staying mostly by myself."

Fifth-ranked and three-time Olympic champion Eric Frenzel of Germany, sixth-ranked Kristjan Ilves of Estonia and seventh-ranked Terence Weber of Germany also did not compete in the first of three medal events after testing positive.

Each of them can potentially make a comeback on the large hill Tuesday and the team competition next Thursday.

“I was in isolation,” he said. “I had to go on a special course, and not on this course.”

Nordic combined has been part of the Winter Olympics since the first edition in 1924. It’s the only Olympic sport where only men compete.

Five Americans qualified for the Olympics, but just four could compete on the normal hill. The coaches chose Ben Loomis, Jared Shumate, Taylor Fletcher and Stephen Schumann to compete over Jasper Good. Loomis finished 15th and was followed by Shumate (19th), Fletcher (24th) and Schumann (25).