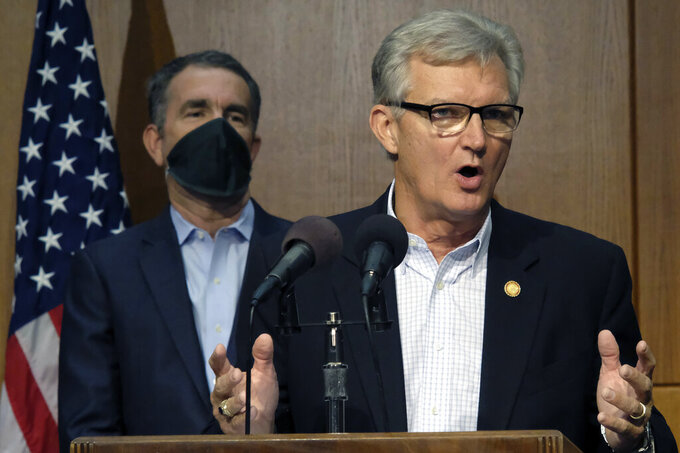 FILE - In this Thursday, June 11, 2020, file photo, Virginia Governor Ralph Northam, left, listens as Aubrey Layne, Virginia Secretary of Finance, speaks during a press briefing inside the Patrick Henry Building in Richmond, Va. Officials from Virginia Gov. Northam's office say they are reading the fine print of the $1.9 trillion federal COVID-19 relief bill. They plan to meet next week with legislative leaders to start talks about how the state's portion of the aid would be best spent. (Bob Brown/Richmond Times-Dispatch via AP, File)

RICHMOND, Va. (AP) — State officials are reading the fine print of the $1.9 trillion COVID-19 relief bill and plan to meet next week with legislative leaders to start talks about how the state’s portion of the aid would be best spent, Virginia Gov. Ralph Northam’s administration said Thursday.

Virginia is expecting about $6.8 billion in state and local allocations on top of other grant funding in the bill, Secretary of Finance Aubrey Lane said. He said $3.8 billion of that will go to the state government and the rest directly to local governments.

The legislation, which President Joe Biden signed Thursday, will send a total of $350 billion to state, local and tribal governments for costs incurred through the end of 2024. That money will arrive as Virginia finds itself in a relatively strong financial position. The state's economy has held up well amid the pandemic, and tax revenues exceeded last year’s forecasts.

“My personal opinion is it would have been better to have this large amount in the beginning of the crisis. And it would have ... forestalled some of the stuff we had to deal with. But we are where we are," Layne said.

Less than two weeks ago, the Democrat-controlled General Assembly sent Northam a state budget that would fund pandemic-relief efforts, boost the state’s reserve fund and give state workers and state-supported employees a raise.

That spending plan did not assume any money was coming from the new relief bill.

Since lawmakers have adjourned, Layne said the Democratic governor will likely have to call them back to Richmond for a special session to allocate the new money.

Layne said he thinks lawmakers and the administration are “pretty well aligned” about wanting to use the money to help the people and businesses most affected by the pandemic and related economic downturn. He also said he hoped some could be used to rebuild the state's unemployment trust fund.

Layne said the administration plans to meet with the leaders of the House and Senate money committees early next week.

“I am grateful that the new Congress understands the situation states are facing and has directed more funding where it is needed: states and localities,” House Appropriations Chair Luke Torian said in a statement.

Also included in the bill are provisions providing up to $1,400 direct payments this year to most Americans and extending $300 weekly emergency unemployment benefits into early September.