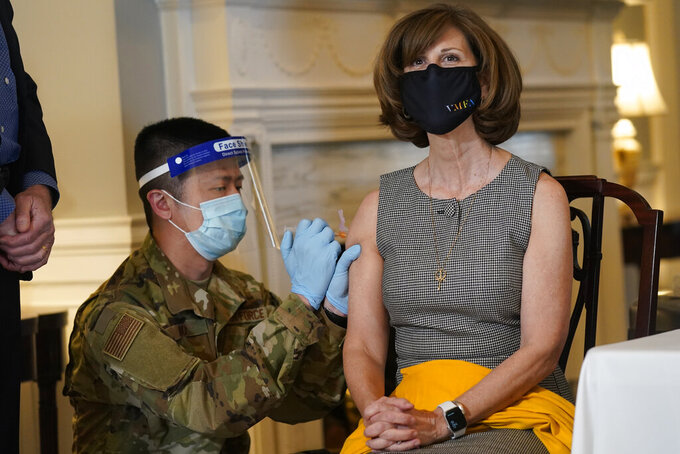 Virginia First Lady Pam Northam receives a COVID-19 vaccination from Tech Sgt. Hsuan Kuo, of the Virginia Air National Guard at the Governors Mansion in Richmond, Va., Monday, March 15, 2021. The Northam's got a shot of the Johnson & Johnson coronavirus vaccine, joining the growing number of Virginians who are being inoculated against the potentially deadly disease. (AP Photo/Steve Helber)

Virginia Gov. Ralph Northam got a shot of the coronavirus vaccine Monday, joining the growing number of Virginians who are being inoculated against the potentially deadly disease.

Northam shed a navy blue sport jacket and a light blue dress shirt before a member of the Virginia National Guard plunged a needle into his left shoulder. Northam, who is also a doctor, gave a thumbs-up and got a round of applause at the governor's mansion in Richmond.

“I really encourage all Virginians to register through our central registration site and really stay by your phone or your computer so that we can communicate with you because we’ve got over 400,000 doses in Virginia,” he said.

Governors throughout the country have been getting vaccine shots over the last several weeks. They include Nevada's Democratic governor, Steve Sisolak, who got a dose last week along with workers at a supermarket.

Iowa's Republican governor, Kim Reynolds, received a shot on March 3 at her weekly news conference. She said that nearly half the U.S. governors have been vaccinated.

But even as more Americans are inoculated and the number of new cases falls, Virginia is not lifting many of its coronavirus-related restrictions, such as its mask-wearing requirement. A handful of other states — including Iowa, Mississippi, Montana, North Dakota, Texas and Wyoming — are lifting their mask-wearing mandates.

“We still have several months where we have to remain vigilant,” Northam said. “I want everybody to continue to wear their masks, social distance, keep your hands clean. And finally we can get this pandemic in the rearview mirror.”

Northam is among some U.S. governors who were infected with the coronavirus. He and his wife, Pam, who also was vaccinated Monday, announced that they tested positive in September.

Health officials with the U.S. Centers for Disease Control and Prevention have said that people should get vaccinated regardless of being previously infected with COVID-19.

That's because scientists don’t know exactly how long someone's immune system will protect them after getting the virus. Vaccines, by contrast, are designed to bring about a more consistent and optimal immune response. And they should boost whatever preexisting immunity a person might have from an infection, experts say.

Northam received the Johnson & Johnson vaccine, which requires one shot. The Pfizer and Moderna vaccines require two. Health officials have said that all three vaccines are effective and that people should receive whichever one becomes available.

Nearly 1.8 million people who live in Virginia have been vaccinated with at least one dose coronavirus vaccine, according to the Virginia Department of Health. That's about 21% of the state's population.