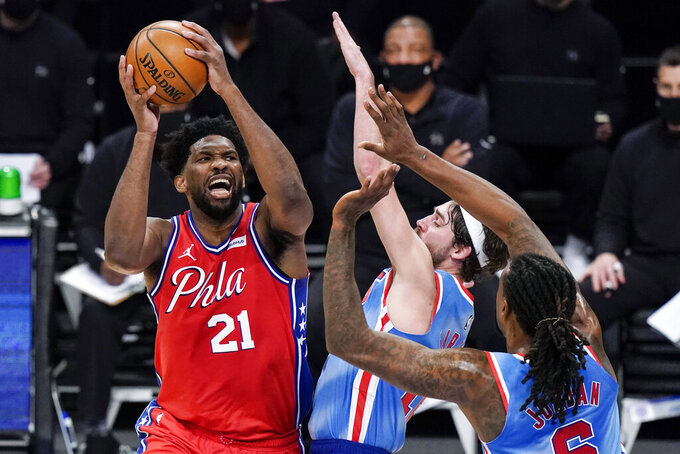 PHILADELPHIA (AP) — The Philadelphia 76ers are set to play Saturday without All-Stars Ben Simmons and Joel Embiid and will have the NBA minimum eight players active as the team deals with injuries and COVID-19 concerns.

Sixers guard Seth Curry learned of a positive COVID-19 test while the team played Thursday in Brooklyn, forcing the team to spend an extra day in New York for additional testing.

Coach Doc Rivers said before the game against Denver the Sixers will have seven players available and that injured forward Mike Scott will be active but not play.

Rivers expressed concern the Sixers were even playing a game so short-handed and he worried about "our players' health on the floor.”

Embiid, Simmons, Curry and Tobias Harris are the missing starters in the lineup. Rivers said Simmons has a left knee injury and Embiid is nursing a sore back.

“Ben in the Brooklyn game had some knee stiffness,” Rivers said. “So we almost probably knew after the game that he wouldn’t play tonight. And then Joel started complaining about his back, that started yesterday. And we didn’t know if he was playing or not but honestly, with the minutes we would have to ask, it would be insane to play him tonight.”

Nuggets coach Michael Malone said he needs to make sure his team would not "relax” against an opponent without its best players.