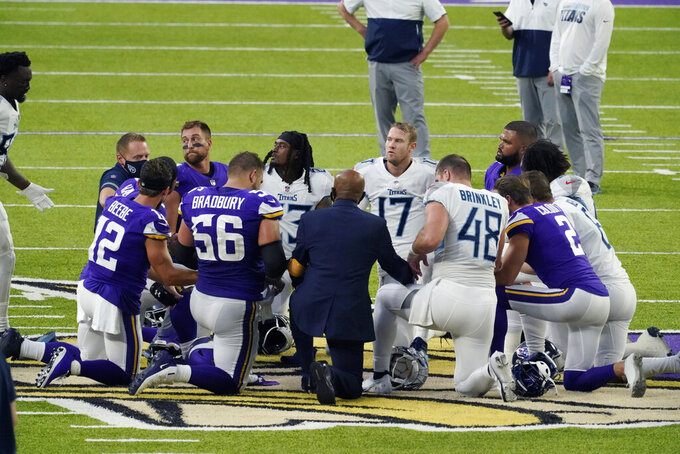 Tennessee Titans and the Minnesota Vikings players meet at midfield following an NFL football game, Sunday, Sept. 27, 2020, in Minneapolis. Tennessee won 31-30. The NFL says the Tennessee Titans and Minnesota Vikings are suspending in-person activities after the Titans had three players test positive for the coronavirus, along with five other personnel. The league says both clubs are working closely with the NFL and the players’ union on tracing contacts, more testing and monitoring developments. The Titans are scheduled to host the Pittsburgh Steelers on Sunday.(AP Photo/Jim Mone)

NASHVILLE, Tenn. (AP) — The Tennessee Titans have at least one more day to see if the team’s coronavirus outbreak is under control before their game with the Steelers is rescheduled for Monday or Tuesday.

Only one new positive test result came back Wednesday, a day after the Titans had three players and five team personnel test positive for COVID-19. More daily test results are upcoming.

The league announced the postponement from Sunday afternoon on Wednesday.

The Titans hope to be allowed back inside their facility Saturday, though coach Mike Vrabel said that could happen before then or later. The Titans are preparing to play as early as Monday. Vrabel said he’s confident the NFL will allow them some time to practice before the game.

“We’ve worked on short weeks before," Vrabel said. "We’ve played three games in 13 days. I'm sure the other teams that we played before had a few extra days of practice. And so it’ll be important that the time that we do get to spend practicing, we take advantage of it.”

Outside linebackers coach Shane Bowen was the first to test positive, with the Titans learning Saturday of his results. He didn't make the trip to Minnesota, where Tennessee won 31-30.

On Tuesday, the Titans placed three players on the reserve/COVID-19 list, including key players defensive captain and lineman DaQuan Jones and long snapper Beau Brinkley. Outside linebacker Kamalei Correa became the fourth on that list Wednesday.

Vrabel is not identifying the five other personnel who tested positive, saying only that he was not among that group. The Titans coach said some of those who tested positive are experiencing “flu-like symptoms" and he expects they will feel better shortly.

The league's infectious disease experts have been helping the Titans and the Vikings track down anyone in contact with those who tested positive. The Vikings had no positive test results Wednesday and were preparing to reopen their building Thursday, with a game Sunday at Houston.

The Titans also have evaluated all of the protocols and how they've handled meetings and social distancing. Vrabel said he and general manager Jon Robinson already had taken steps Monday to severely limit who had access to the team's headquarters this week before the NFL decision to close the building.

“We want to make sure that we’re doing everything we can to make the players safe and that this doesn’t happen again,” Vrabel said.

Now the Titans must prepare virtually until they can hit the practice field for a game against the Steelers pitting two of the NFL's seven undefeated teams.

Vrabel said they held a team meeting virtually Wednesday morning and he showed the Titans video of Pittsburgh. Players had meetings with their position coaches — all through video conference calls.

With only a practice and a walk-through possible before kickoff, the Titans will be preparing virtually for the Steelers to make sure they're all on the same page. Pittsburgh has a league-high 15 sacks, so paying attention and talking on those Zoom calls will be crucial.

Players with injuries still can receive treatment at the Titans' facility, with visits to the training room staggered. Other Titans are home hoping no more positive results turn up and that they themselves don't test positive even as they attempt to keep their family members safe.

Safety Kevin Byard said more positives remain a possibility, with the virus sometimes showing up days after exposure. In the meantime, it's up to individual players being professionals and finding a way to make up for missed practices.

“If it’s getting on a Peloton bike, just going around your neighborhood, jogging around to making sure that you continue to try to get your blood going, get your blood flowing, do a little bit conditioning on your own, to make sure that when you actually get out there your muscles aren’t just super tight,” Byard said.

The Titans are working to bring in a new long snapper, a crucial position for a team that has won all three games inside the final two minutes on a field goal. That player will have to go through the NFL's testing protocol first. Replacing Jones also won't be easy, but defensive lineman Jeffery Simmons is off to a strong start.

For the Steelers, the only change is that the schedule pushes back a day or two. They host the Eagles on Oct. 11, when the Titans are scheduled to host Buffalo.

“We know we’re going into an environment that had the outbreak, but we feel like if we do what we’re supposed to, we’ll be fine,” Steelers cornerback Mike Hilton said.

Cleveland Browns center JC Tretter, the president of the players’ union, said the outbreak was a reminder that everyone must be more vigilant despite low testing numbers across the league.

“It’s easy to fall into a sense of ease or relax on some of the protocols,” he said Wednesday. “But the protocols are what’s keeping us going, making sure that we’re making the right decisions. … We have been going really smoothly for a long time and now there was some expectation that this was eventually going to happen. It’s tough to keep the virus completely out.”

And the Titans are the NFL's first team tasked with finding a way to adapt and play through the league's first COVID-19 outbreak.

“It’s not ideal, but we have to find a way,” quarterback Ryan Tannehill said. “We have to be able to overcome adversity. It’s just a different type of adversity. We’ve done it throughout this season so far a few weeks in and showed our mental strength that we can find a way to win games, and this is just another challenge along that road.”