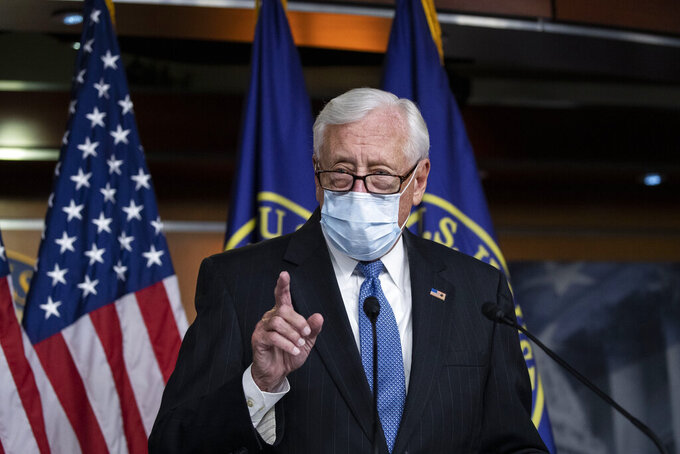 FILE - In this June 30, 2020, file photo, House Majority Leader Steny Hoyer of Md., speaks during a news conference on Capitol Hill, in Washington. Lawmakers are giving themselves more time to sort through their end-of-session business on government spending and COVID-19 relief, preparing a one-week stopgap spending bill that would prevent a shutdown this weekend. (AP Photo/Alex Brandon, File)

WASHINGTON (AP) — Lawmakers are giving themselves more time to sort through their end-of-session business on government spending and COVID-19 relief, preparing a one-week stopgap spending bill that would prevent a shutdown this weekend.

House floor leader Steny Hoyer, D-Md., said on Twitter that the temporary government funding bill is slated for a vote on Wednesday, when it is sure to easily pass. The development comes as Capitol Hill is struggling to figure out how to deliver long-delayed pandemic relief, including additional help for businesses hard hit by the pandemic, further unemployment benefits, funding to distribute COVID-19 vaccines and funding demanded by Democrats for state and local governments.

Disagreements flared Monday over one key provision — a proposed liability shield from COVID-19-related lawsuits for businesses, schools and organizations that reopen.

Hoyer had previously told lawmakers that this week would probably be the last of the session, but talks are going more slowly than hoped on a $1.4 trillion omnibus spending bill under assembly by senior members of the powerful Appropriations committees. The stopgap measure would prevent a government shutdown through Dec. 18.

“I am disappointed that we have not yet reached agreement on government funding," Hoyer said.

Three main items of legislation are at issue in the end-of-session agenda: a defense policy bill that President Donald Trump is threatening to veto; the $1.4 trillion government-wide spending bill; and perhaps $900 billion in long-sought COVID-19 relief.

There are two sets of talks on COVID-19 relief — on the leadership level and by a group of Senate moderates — occurring at the same time, and it's unclear how the negotiators might sort themselves out, lending an air of confusion to the process.

The bipartisan Senate group was set to meet again Monday evening. But a long weekend of talks pushed senators apart on one difficult negotiation, the proposed liability protection that has been a priority of Senate Majority Leader Mitch McConnell.

“We have seen some hopeful signs of engagement from our Democratic colleagues, but we have no reason to think the underlying disagreements about policy are going to evaporate overnight,” McConnell said Monday.

Republicans initially proposed a sweeping five-year liability shield, retroactive to December 2019, to protect companies and organizations from COVID-19-related lawsuits. Democrats, along with their allies in labor and civil rights groups, roundly dismissed that approach as a danger to workers.

Sen. Elizabeth Warren, D-Mass., said she wants to make sure “we’re not sacrificing the rights of people who have been made sick or killed by their employers with a pro-corporate liability release.”

Lawmakers heard from a coalition of 142 labor and civil rights groups urging them to resist granting companies liability for COVID claims.

“Any type of immunity would directly harm Black, Latino, and other workers of color who are overrepresented in ‘essential’ and in-person, reopened jobs,” the coalition wrote in a letter to Congress.

Negotiators suggested a scaled-back liability shield, but a six-month proposal was panned by Republicans and there is no agreement yet from Democrats. The powerful AFL-CIO said Monday it opposes even a short-term liability provision.

It's clear that McConnell's Republican majority is demanding the liability protection in exchange for the Democrats' push for additional money for states and cities battling the COVID-19 crisis.

“The leader had made clear that state and local money is tied to liability protection, so there’s either going to be none for both of those or both of those are going to be provided for," Sen. John Cornyn, R-Texas, told reporters. "My hope is we’ll do both.”

White House economic adviser Larry Kudlow said Monday that Trump is comfortable with a deal along the lines of one being put together by the group of Senate moderates and pragmatists. That $900 billion plan does not include direct payments sought by Trump before the election.

Without another round of fresh aid, after the $1,200 checks sent to Americans in spring, lawmakers on the left and right said they would have trouble backing the package.

Sen. Bernie Sanders, I-Vt., said last week he would need to direct payments for his support, and GOP Sen. Josh Hawley said Monday that he encouraged Trump to reject any package without them.

“I urged him to veto,” Hawley said he told the president during a recent phone call.

If an agreement isn’t possible on the omnibus bill, lawmakers might have no option but to pass another continuing resolution that would keep the government running on autopilot and permit them to punt the unfinished spending bills into next year.