Vote on new Israeli government to be held in coming week 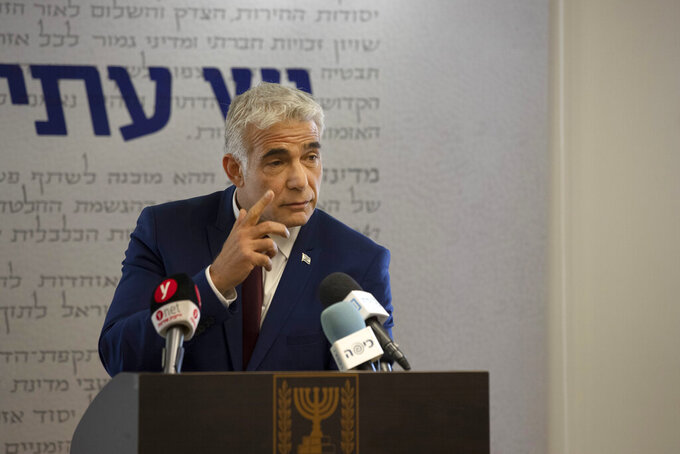 JERUSALEM (AP) — Israel's parliament speaker said Monday that a vote to approve a new government that would end Prime Minister Benjamin Netanyahu's 12-year rule will be held in the coming week, without setting a precise date.

The announcement by Yariv Levin, a close Netanyahu ally, leaves time for the prime minister's efforts to try to peel away supporters from the fragile coalition arrayed against him, which consists of eight parties and has only a narrow majority in Israel's 120-member Knesset, or parliament.

Netanyahu's supporters have launched a blistering campaign against his opponents, including death threats and raucous protests outside their homes that has forced the Knesset to beef up their security details.

Netanyahu has accused his erstwhile right-wing allies of betrayal for allying with leftists and a small Arab party that he had also courted.

The so-called change coalition appears to be holding together despite the attacks and its ideological differences.

“This government is being formed because it’s the majority,” Lapid said Monday, insisting that it would serve all Israelis and be based on “trust, on decency, on goodwill.”

“These past few days proved how much we need change. If the leadership uses violence and incitement against Knesset members, against their children, against the very essence of the democratic process, then we need change," Lapid said.

Israel held four elections in less than two years, the most recent in March.

Each time, voters were deeply polarized over whether Netanyahu should remain in office while on trial for corruption. An emergency government formed last year to address the coronavirus pandemic was mired in political infighting and collapsed in December. Netanyahu tried and failed to form a government after the March elections before the mandate was given to Lapid.

The political transition, which could yet be derailed, comes amid heightened tensions following weeks of clashes between Palestinian protesters and Israeli police in Jerusalem that ignited a wave of ethnic violence in Israeli cities and triggered an 11-day Gaza war.