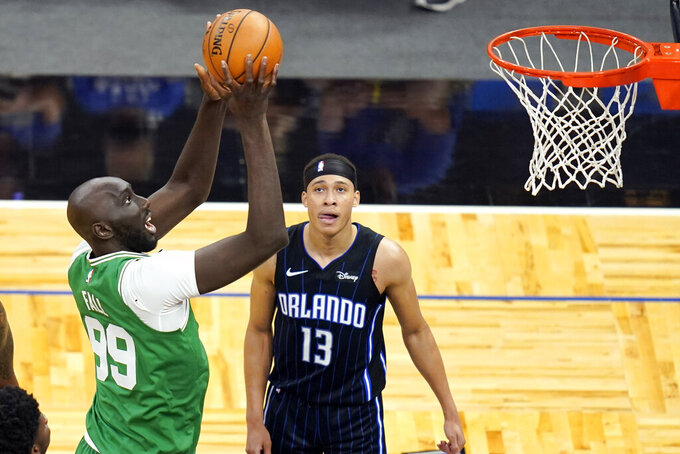 Boston Celtics center Tacko Fall (99) makes a shot in front of Orlando Magic guard R.J. Hampton (13) during the second half of an NBA basketball game, Wednesday, May 5, 2021, in Orlando, Fla. (AP Photo/John Raoux) 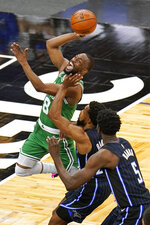 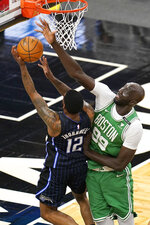 ORLANDO, Fla. (AP) — Kemba Walker tied a season high with 32 points in his return from a four-game injury absence, Evan Fournier had 18 points in his first game back in Orlando since being traded, and the Boston Celtics routed the Magic 132-96 on Wednesday night.

Jayson Tatum shook off a slow start and finished with 27 points for Boston, which swept the three-game series with the Magic and beat Orlando for a sixth straight time over the past two seasons. The Celtics made 21 3-pointers, just two fewer than their season-best 23 against Orlando on March 21.

Walker, who entered averaging 20.7 points in 34 career games against the Magic, showed no rust following a nine-day layoff because of a strained left oblique suffered on April 25. Walker made 11 of 18 shots and shot 6 of 9 from 3-point range in 28 minutes for Boston, which pulled even with Miami for sixth in the Eastern Conference standings. Walker scored 32 points for a third time this season.

Fournier, who played for the Magic for 6 1/2 seasons before his trade to Boston on March 25, was honored with a highlight video between the first and second quarters.

Magic coach Steve Clifford was back on the sidelines after missing six games following a positive COVID-19 test. Clifford, 59, said getting vaccine shots on each side of his positive test helped him.

“It was very uneventful, thankfully and, from what I’ve been told, the biggest part was because I had been vaccinated,” Clifford said. “My body was ready for it.”

To illustrate how much he loved Orlando during his tenure with the Magic in late March, Fournier said he had never lived in the same city more than two years since he was 13 when he left his family home to chase his professional basketball dreams. The next day, the guard who was in the midst of a career year was traded from Orlando to Boston.

Upon his return to Orlando, Clifford said of the versatile guard: “There’s nothing more important when you play 82 games than having a guy who you never have to worry whether he’s going to try hard. It was a given with him. Played hurt, played really hurt, always ready to play, always into the game plan and badly wanted to win.”

Celtics: Coach Brad Stevens said Jaylen Brown (ankle sprain) might rejoin the team in Chicago on Friday and could play. ... G Romeo Langford was put in the NBA’s concussion protocol program after experiencing headaches a day after an accidental collision in practice. ... One of the loudest cheers came in the fourth when 7-foot-5 center Tacko Fall checked in. Fall played college basketball at nearby UCF. He had an up-and-under layup with 4 minutes remaining and later stuffed a dunk attempt by R.J. Hampton.

Magic: Sindarius Thornwell became the 28th player to appear in a game this season for Orlando, tying an NBA record set by Memphis in the 2015-16 and ’18-19 seasons.