Walz to emphasize COVID-19 recovery in next 2-year budget 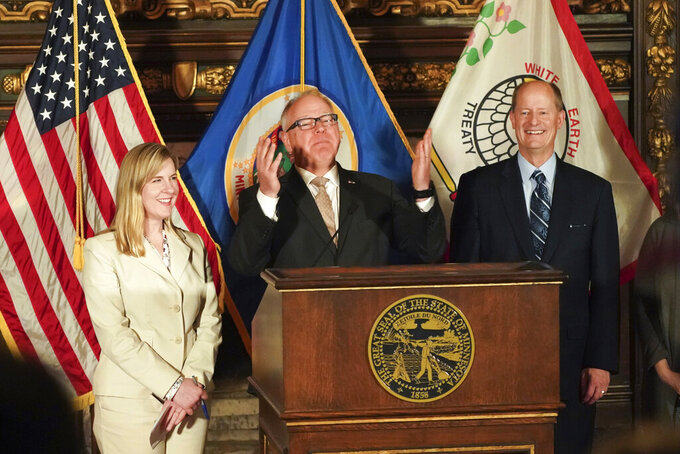 FILE - In this May 19, 2019 file photo, Gov. Tim Walz, center, with Senate Majority Leader Paul Gazelka, right, and House Speaker Melissa Hortman, gestures at a news conference in St. Paul, Minn. When the Minnesota Legislature convenes for its 2021 regular session Tuesday, Jan. 5, 2021, it won't look like a normal session. The House will meet entirely via Zoom until further notice because of the pandemic. The Senate will try a hybrid approach. And the Capitol will remain surrounded by riot fencing. (Glen Stubbe/Star Tribune via AP, File)

ST. PAUL, Minn. (AP) — Gov. Tim Walz will this week propose a two-year budget with a heavy focus on helping Minnesota recover from the impact of COVID-19.

The governor's budget, which is expected top $50 million, will emphasize assistance to small businesses, help for working families affected by the disease itself or the related fallout, and measures to get students caught up after a year of mostly distance learning. And it will set up the debate over spending, taxes and other priorities at the Legislature, which must adopt a balanced budget before the current one expires June 30. Walz is expected to reveal his proposed budget on Tuesday.

“COVID is everything and really sets the backdrop for the proposals and mood as we release the budget,” Jim Schowalter, commissioner of the Department of Minnesota Management and Budget, told Minnesota Public Radio.

Schowalter’s department in early December projected a $1.3 billion deficit for the two-year budget period. But the Democratic governor and Republican Senate Majority Leader Paul Gazelka said they are optimistic the picture will improve when the commissioner provides an update in February. Plus, hundreds of millions of dollars are expected to flow through Minnesota’s treasury from the latest federal coronavirus relief package. How flexible those dollars are is a big question mark.

“That will make our budget negotiations and our budget deliberations a little more complicated,” said Democratic House Speaker Melissa Hortman, of Brooklyn Park. “Because sometimes deciphering the federal legislation takes a little while.”

Walz hinted to the Star Tribune that tax increases on wealthy Minnesotans would be part of his equation, though he wouldn't give specifics.

“Families, especially those making $1 million or more, the numbers are pretty staggering how much better they did during the pandemic,” the governor said.

But Gazelka, of East Gull Lake, and Republican House Minority Leader Kurt Daudt, of Crown, both said their caucuses will oppose any new taxes. They’re pushing instead for across-the-board reductions to state agency budgets and have suggested tapping into the state’s budget reserve, which totals about $2.4 billion, to plug any remaining gap.

“We have a good amount of reserves that you save for rainy days,” Gazelka told MPR. “And everyone acknowledges that this is a rainy-day moment. It’ll be hard, but I do believe you can do it without a tax increase.”

The state is required to have a balanced budget, which likely means difficult negotiations among the Democratic governor and leaders of the Senate Republican and House Democratic majorities. They have their own priorities for the session, which is due to adjourn in mid-May.