Walz says he'll give up COVID-19 emergency powers by Aug. 1 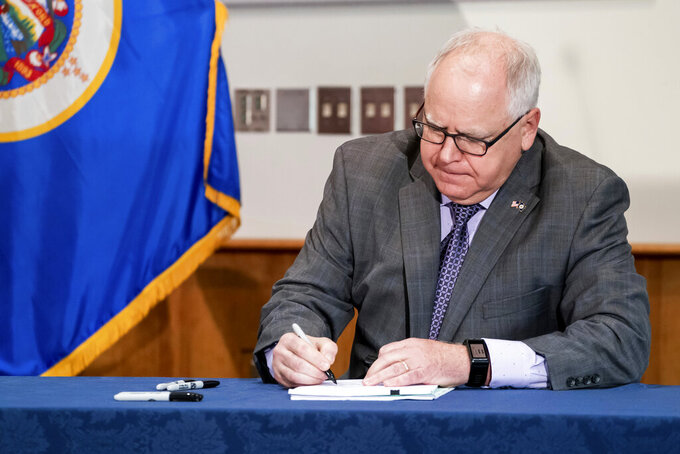 FILE - In this July 23, 2020, file photo, Gov. Tim Walz signed into law a sweeping package of police accountability measures in St. Paul, Minn., making Minnesota the latest state to adopt changes to law enforcement, including a ban on neck restraints, in the wake of George Floyd's death. The bill, passed by the Legislature earlier this week, also bans chokeholds and fear-based or "warrior-style" training, which critics say promotes excessive force. (Glen Stubbe/Star Tribune via AP, File)

ST. PAUL, Minn. (AP) — Gov. Tim Walz says he will relinquish the special powers that he has used to manage the COVID-19 pandemic by Aug. 1, ending a peacetime state of emergency that has been in effect since last March.

“That’s when the toolbox will close, everything will be done, it’ll be done in an orderly fashion,” Walz told reporters Friday. “At this point in time, it’s turning off the lights and sweeping the floor.”

About three dozen states still have a state of emergency, Walz said, calling his plan “the responsible way to close this up.”

But that wasn't assurance enough for Republicans who control the Minnesota Senate and complain that the Democratic governor has repeatedly cut them out of major pandemic decisions. They approved a state government budget bill Friday that would end the state of emergency on July 1. The Democratic majority in the House has repeatedly blocked such moves.

“He’s proposing Aug. 1, we’re saying, look, 15 states have already done it, we don’t need to wait any longer. This is time to close the chapter and move towards the future,” Republican Senate Majority Leader Paul Gazelka, of East Gull Lake, said.

Walz has already allowed many of his most contentious pandemic executive orders to expire, such as the mask mandate and restrictions on businesses.

But Minnesota's director of Homeland Security and Emergency Management, Joe Kelly, said the governor needs to hold on to his remaining emergency powers through next month.

Kelly said in a letter to lawmakers that the peacetime emergency allows the state to process unemployment insurance claims more quickly, and maintains Minnesota’s ability to tap into $90 million in federal emergency Supplemental Nutrition Assistance Program food benefits for the needy for August and September. He also said it will take all of July to move 500 state employees back to their traditional roles after they were reassigned to help respond to the pandemic.

“We have a handle on this. We have the long-term ability to be able to manage COVID,” Walz said.