Washington has virus case, 3 other teams add to COVID list 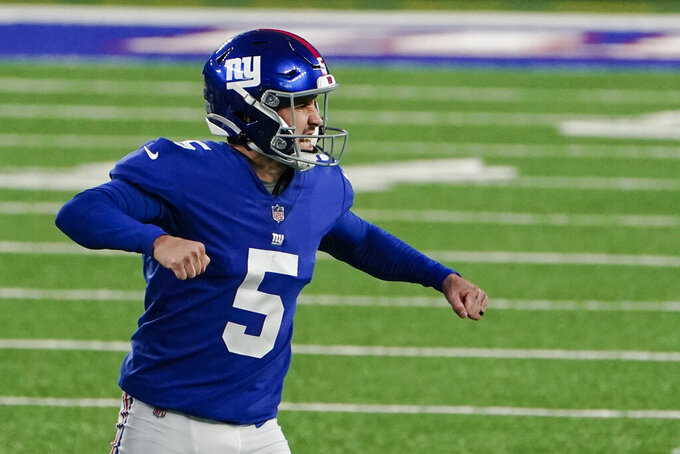 The New York Giants, Atlanta Falcons and Las Vegas Raiders put players on the NFL's COVID-19 list Tuesday, while Washington had its first instance of someone in the organization testing positive for the coronavirus since the season began.

Meanwhile, the Los Angeles Rams announced they will hold their team meetings from home Wednesday after an unidentified player tested positive for coronavirus Tuesday night.

The player is self-quarantining, and the Rams say they are “entering intensive protocol.” The team was scheduled only for a light walkthrough practice Wednesday with an extra-long week of preparation for their game at Tampa Bay on Monday night.

“It reflects the continued uptick that we’re seeing in places around the country,” said Dr. Allen Sills, the NFL's chief medical officer. “We’ve seen that throughout the course of our season, as our players, coaches and staff are exposed to others outside the team facility, we’re going to see these cases.”

The other players put on the list Tuesday were Falcons wide receiver Laquon Treadwell, and Raiders defensive end Clelin Ferrell and defensive back Lamarcus Joyner.

Gano is the second Giants player in three weeks to go on the COVID-19 list after guard Will Hernandez on Oct. 29, who was activated Nov. 10 and played Sunday against Philadelphia. The Giants, who have a bye this week, said two staff members were told to remain home after coming into contact with the player who tested positive.

Treadwell is the second Atlanta player on the COVID-19 list, joining defensive end Dante Fowler Jr., who was put on it last week. Treadwell has spent the past 10 weeks on the practice squad.

Rams players and coaches will hold their normal meeting schedule from home Wednesday. They haven’t determined their schedule for the rest of the week.

Los Angeles center Brian Allen was the first NFL player to confirm he had tested positive for coronavirus back in April. Other Rams players who have already recovered from COVID-19 infections include left tackle Andrew Whitworth and linebacker Terrell Lewis.

The Rams (6-3) beat the Seattle Seahawks 23-16 last Sunday to move into a first-place tie atop the NFC West.

Sills said the NFL has identified nine people in recent weeks who were identified as “high-risk” close contacts who later tested positive after being isolated. But in a much larger number of cases, there have been no “high-risk” contacts in a sign teams are following the protocols, Sills said.

Sills also said the league has done whole genome sequencing on players who test positive and most of the transmission has come from contacts in the community.

Washington's positive test result was the team's first since July. A person with direct knowledge of the situation said the player who tested positive did not travel with Washington for its game at Detroit last weekend. The person spoke to The Associated Press on condition of anonymity because the team did not release specific details about the positive case.

Ioannidis has been on injured reserve since Sept. 29.

The Giants and Washington were notified of their respective positive test results Monday night. The players self-isolated, and contact tracing began.

Washington, which is set to host Cincinnati on Sunday, was one of the few teams that hadn't had a positive and is now in the NFL's intensive protocols. Meetings will be conducted virtually this week, and the practice facility will only be open to staff with limited access for players.

Asked last week about his team getting through the first nine weeks of the season without someone testing positive for the virus, Washington coach Ron Rivera jokingly called that a jinx. He credited senior director of player development Malcolm Blacken for reminding guys of their responsibilities during the pandemic.

Washington announced Monday no fans will be allowed for the Bengals game after hosting 3,000 on Nov. 8 against the Giants. FedEx Field is in Landover, Maryland, and the nearby Baltimore Ravens also took the step of barring fans for their next game as cases spike around the U.S.

There have been 19 teams that have had fans at games this season.

“We have been tracking case trends at the local and state level with public officials and no local case clusters have been reported or traced back to NFL games,” spokesman Brian McCarthy said.