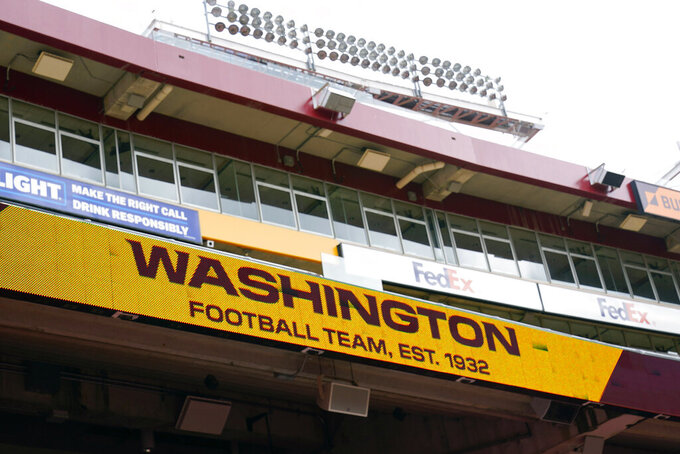 Fedex Field scoreboard displays the Washington Football Team name during warmups before the start of a NFL football game between Washington Football Team and Philadelphia Eagles, Sunday, Sept. 13, 2020, in Landover, Md. Washington has dumped its 86-year-old team name, handed over an investigation into workplace misconduct to the NFL, seen minority owners and Dan Snyder battle it out in court, coach Ron Rivera battle a form of skin cancer and reached the playoffs on the arm of a quarterback who hadn't played in two years because of an injury that looked career-threatening. All in a few months' work for arguably the biggest soap opera in professional sports with a playoff game against Tom Brady up next. (AP Photo/Susan Walsh)

One name change years in the making, two months of cancer treatments for the beloved new coach, three starting quarterbacks, four combined wins over rivals Dallas and Philadelphia, five months and counting of an investigation into workplace misconduct and countless court filings by minority owners and Dan Snyder over interest in selling shares of the team.

All this happened in less than half of a calendar year for the franchise now known only as the Washington Football Team. Even for an organization infamous for decades of drama since three Super Bowl victories, this has been a whirlwind ride unlike many that have been seen in North American professional sports.

"This experience ranks up as the most different one I’ve had, and not just the playoff race but the whole year," said coach Ron Rivera, who took over Jan. 1, was diagnosed with squamous cell carcinoma in August and did his job through proton therapy. “This’ll be a memorable one. It really will be.”

Just over a year ago, Snyder fired longtime team president Bruce Allen, putting in motion an attempt to change the organizational culture. In mid-July, amid a national reckoning over racism and pressure from key sponsors, he dropped the Redskins name that had been around since 1933 when the team was still based in Boston.

The same week, 15 female former employees said they were sexually harassed during their time with the team, and an independent investigation was launched, which the NFL eventually took over. The Washington Post reported allegations that Snyder was involved in the harassment, which he denied.

Snyder has since battled in U.S. District Court with minority owners Robert Rothman, Dwight Schar and Frederick Smith over their intention to sell their shares of Washington Football Inc.

His team is in the playoffs for the first time in five years, but there will be no fans allowed Saturday night when Tom Brady and the Tampa Bay Buccaneers visit for a wild-card round game because of the coronavirus pandemic. As NBC Sports' Mike Tirico said Wednesday, “There’s been a lot of stuff that’s happened with the organization during the year.”

That's an understatement, if not a euphemism.

“We didn’t know what was going to happen this year with everything,” defensive end Chase Young said. “With the pandemic, the name change — just everything going on around our team.”

Everything on the field includes Young's stellar rookie season, quarterback Alex Smith's remarkable comeback two years after breaking his right leg in gruesome fashion and a turnaround from 2-7 to NFC East champion, albeit with a losing record.

“It’s been a very eventful year, for sure,” said linebacker Thomas Davis, who signed in March, before the name change. “I definitely know that if anybody was hired who could handle all of the things that happened this year, it would be coach Rivera.”

The experienced 58-year-old coach praised the entire league for getting through the season amid COVID-19 protocols and praised his players and staff for powering through. His cancer fight became a source of inspiration, even as Rivera wanted “business as usual” at the practice facility.

“He wanted us to worry about football so he can take care of himself,” offensive coordinator Scott Turner said. “You could tell there was days that he was fatigued, he was worn out. Sometimes he would come out to practice late. He wasn’t here quite as often as he would be or sometimes he missed a couple meetings here and there, but we all knew what he was going through and we were ready to pick up the slack.”

Rivera didn't miss a game, from a 1-3 start and benching 2019 first-round pick Dwayne Haskins through a Week 17 victory at Philadelphia to get in the playoffs, days after releasing Haskins, who violated COVID-19 protocols twice.

And for all the happenings over the past several months, Washington has the opportunity to add another chapter against the Buccaneers as more than a touchdown underdog. Rivera has encouraged a “Why not us?” mantra that has become easy for players to believe.

“The old saying goes: ‘All you need is a chance,'” he said. “That’s why we’ll show up on Saturday night.”