Watchdog: Nursing home deaths up 32% in 2020 amid pandemic 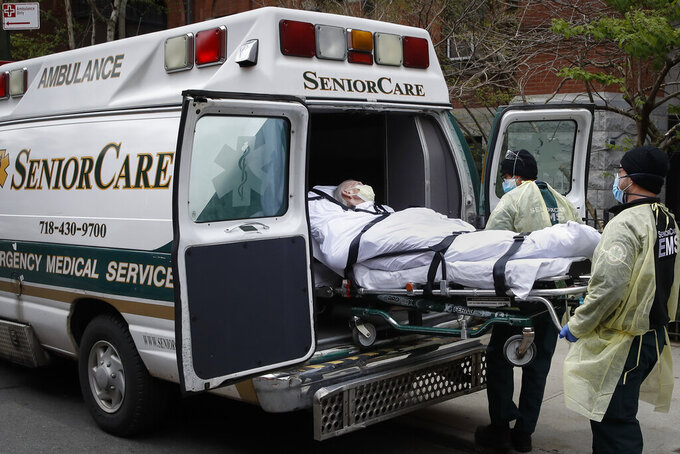 FILE - In this April 17, 2020, file photo, a patient is loaded into an ambulance by emergency medical workers outside Cobble Hill Health Center in the Brooklyn borough of New York. Deaths among Medicare patients in nursing homes soared by more than 30% last year, with two devastating surges eight months apart, a government watchdog reported Tuesday in the most complete assessment yet of the ravages of COVID-19 among its most vulnerable victims. (AP Photo/John Minchillo, File)

WASHINGTON (AP) — Deaths among Medicare patients in nursing homes soared by 32% last year, with two devastating spikes eight months apart, a government watchdog reported Tuesday in the most comprehensive look yet at the ravages of COVID-19 among its most vulnerable victims.

The report from the inspector general of the Department of Health and Human Services found that about 4 in 10 Medicare recipients in nursing homes had or likely had COVID-19 in 2020, and that deaths overall jumped by 169,291 from the previous year, before the coronavirus appeared.

“We knew this was going to be bad, but I don't think even those of us who work in this area thought it was going to be this bad,” said Harvard health policy professor David Grabowski, a nationally recognized expert on long-term care, who reviewed the report for The Associated Press.

“This was not individuals who were going to die anyway,” Grabowski added. “We are talking about a really big number of excess deaths.”

Investigators used a generally accepted method of estimating “excess” deaths in a group of people after a calamitous event. It did not involve examining individual death certificates of Medicare patients but comparing overall deaths among those in nursing homes to levels recorded the previous year. The technique was used to estimate deaths in Puerto Rico after Hurricane Maria in 2017 and in New York City after the first coronavirus surge last spring. It does not attribute a cause of death but is seen as a barometer of impact.

Death rates were higher in every month last year when compared with 2019. The report documented two spikes with particular implications for government policy and for protecting the most vulnerable in future outbreaks of life-threatening illnesses. In April of last year, a total of 81,484 Medicare patients in nursing homes died. Then eight months later, after lockdowns and frantic efforts to expand testing — but before vaccines became widely available — nursing home patients accounted for a staggering 74,299 deaths in December.

“This is happening long after it was clear that nursing homes were particularly vulnerable,” said Nancy Harrison, a deputy regional inspector general who worked on the report. “We really have to look at that. Why did they remain so vulnerable?” Federal investigators are still drilling down to try to document the chain of causes and effects.

Responding to the report, the Centers for Medicare and Medicaid Services said that nearly 80% of nursing home residents and more than 55% of staff are now vaccinated, and the agency is working to protect health and safety. CMS sets standards for nursing homes.

The two main nursing industry groups, the American Health Care Association and LeadingAge, said the grim statistics reflect the consequences of society and government not placing a high enough priority on the needs of frail elders. That “showed once again how ageism can result in policies that treat older people as expendable,” said Katie Smith Sloan, president of LeadingAge, which represents nonprofit homes.

Tuesday's report was the most comprehensive yet from the government because it included statistics for the early part of last year, during the initial coronavirus surge. Medicare did not require nursing homes to report COVID-19 cases and deaths occurring before May 8, more than four months into the pandemic year.

In another new finding, the report showed that cases and deaths among Asian American patients tracked with the more severe impacts seen among Blacks and Latinos. Indeed, Asian Medicare enrollees in nursing homes saw the highest increase in death rates, with 27% dying in 2020 compared to 17% the previous year. For whites, the death rate grew to 24% in 2020 from 18% in 2019, a significant increase but not as pronounced.

The inspector general's office based its analysis on Medicare billing data. It also included patients in Medicare Advantage plans sold by private insurers. Although Medicare does not cover long-term care, the vast majority of nursing home patients are elderly, and Medicare does cover their medical needs. The report included both patients who live in nursing homes as well as those temporarily at a facility for rehabilitation.

Health economist Tamara Konetzka of the University of Chicago, who also reviewed the report for AP, said building an estimate from individual death certificates would have faced another set of challenges. Especially in the first wave of the pandemic, many who died would not necessarily have been tested for COVID-19, for example.

“By looking at excess deaths you can get away from some of the measurement issues and say how much worse things were in 2020 than in 2019,” explained Konetzka, who has testified before Congress on the impact of COVID-19 in nursing homes.

The inspector general's findings about Asians highlight a riddle for researchers, said Konetzka. The reasons for higher cases and deaths among Blacks, Hispanics and Asians may not necessarily be tied to race and ethnicity. Instead, minority patients may be clustered in homes located in communities with more severe outbreaks.

The report also found that low-income nursing home patients covered by Medicare and Medicaid together were much more likely to have gotten COVID-19. The infection rate for that group reached 56%, and 26% died.

Some states suffered worse impacts. By the end of December more than half of the Medicare patients in nursing homes in Connecticut, Illinois, Louisiana and New Jersey had or likely had COVID-19.

Although nursing homes locked down in March of last year, government efforts to help were haphazard. The industry complained of chronic shortages of protective gear, including basics like masks and gowns.

The country can't move on yet, said deputy inspector general Harrison. “Hopefully, COVID will go away,” she said. “But once that happens, there will always be infectious diseases, and we all need to ask ourselves what we can do to protect vulnerable nursing home residents going forward.”