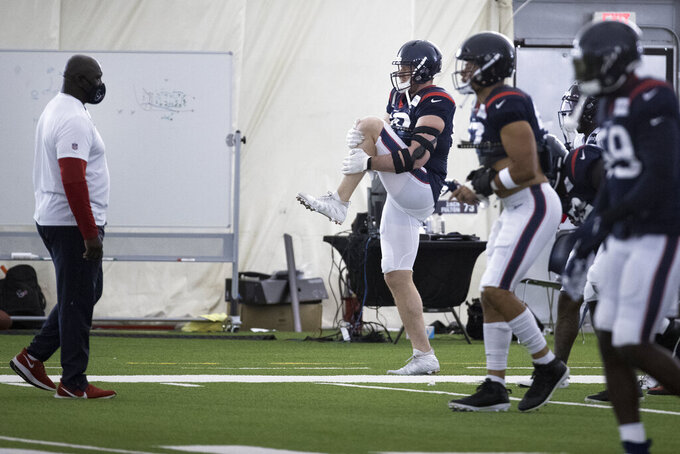 But as O’Brien enters his seventh year in Houston, there are times the coach still sits back and marvels at the defensive end’s unique skills.

“Just the other day ... it was a passing play and it was a drill where it was two steps, put a move on and then chase the ball,” O’Brien recalled. “He chased the ball about 60 yards down the field and tried to punch it out of the receiver’s hands.”

So surprised? No. Impressed? Definitely.

“There are things that you see for a man of his size and athletic ability every day you definitely say to yourself: ‘Wow, that’s a pretty special player right there,’” O’Brien said.

Watt is entering his 10th NFL season and is looking for a big year after playing just one full season in the past four because of various injuries. He says the months of staying at home because of the coronavirus pandemic left him with nothing to do besides work out and that he’s in his best shape in years.

His workouts didn’t leave much time to learn a new skill or hobby during quarantine and he joked that he wasn’t: “whittling bird houses or anything.” But he did find one task that he quite enjoyed.

The three-time NFL Defensive Player of the Year was a rookie when the Texans made their playoff debut in 2011 and has been around to see several playoff letdowns since then capped by last year’s meltdown against the Chiefs in the divisional round.

“It’s obviously frustrating,” he said. “There’s one goal and one goal only, and that’s to bring a championship to this city. That’s what we continue to work for ... the goal has not changed.”

At 31, time is not on Watt’s side, but he denied worrying about running out of chances to help the Texans to their first AFC championship game.

“At some point, time runs out for everybody. That’s just a fact,” he said. “I’d prefer to get things done sooner rather than later, but in terms of do I feel like this is it or the next one is it? No, I don’t think so.”

Watt missed eight games last season after tearing a pectoral muscle in October but returned for the playoffs. He remains the centerpiece of Houston’s defense despite his struggles with injuries over the past few years.

He’ll anchor a defensive line that lost nose tackle D.J. Reader to Cincinnati in free agency. And as the Texans look for young players on the roster to step up this season, Watt is trying to hone his skills as a teacher to try and help them along.

“What I had to learn over time was how to properly articulate a coaching point to a younger player, and I think that’s something ... I’m getting a lot better at.”