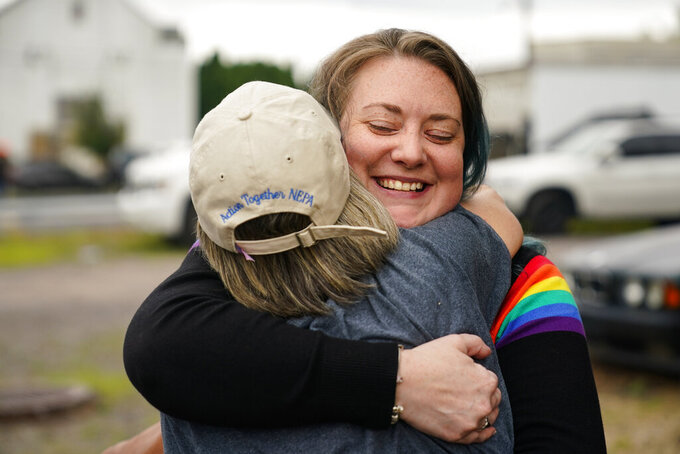 EDWARDSVILLE, Pa. (AP) — They have spent much of the past year fighting for Democrats in this working-class corner of northeastern Pennsylvania, knocking on thousands of doors, giving their evenings to phone banks and devoting weekends to voter registration drives.

But the small group of progressive activists gathered recently at the Edwardsville Pierogi Festival could not contain its frustration with the pace of change in Washington under the party they helped elect.

“We need more,” said Alicia Duque, a 35-year-old mother of three and volunteer organizer for the progressive group Action Together. “It’s taking too long.”

With promises to lift working people with transformative policies on health care, climate change and economic inequality, President Joe Biden won more votes last year than any other presidential candidate in history. But those ambitions have collided with a narrowly divided Congress, where Republicans have largely unified against Biden's agenda and a small group of moderate Democrats are increasingly bucking the White House.

If the broader agenda collapses, Democrats risk alienating voters like Duque, whose help the party will need in the uphill battle to maintain and expand the party's control of Congress next year. That's especially true in Pennsylvania, where Democrats are hoping to flip a Senate seat held by the GOP.

In the five months since Biden took office, Democrats have enacted significant legislation, most notably the $1.9 trillion pandemic relief package that sent $1,200 checks to millions of Americans. The measure also included billions of dollars more to strengthen local economies and vaccination efforts.

But now, the White House is bogged down in negotiations with Republicans over a scaled-back infrastructure package, which is unlikely to include sweeping investments in “human infrastructure” like child care, education and green energy that progressives demand.

At the moment, there are few signs of outright revolt from the party's base, a diverse coalition that features voters of color, young people, union households and women. But with the window for major legislation shrinking heading into another election season, the risks of inaction are growing.

The tension was evident in this corner of Pennsylvania about 20 miles (32 kilometers) from Biden's hometown of Scranton. As members of the grassroots progressive group Action Together gathered with their families to enjoy a few hours of fun at a weekend festival, they said the daily challenges of life in working-class America have not improved quickly enough with Democrats in charge.

The pandemic may be under control, they said, but they are struggling with child care costs, student loan debt and inflation. And in their free time, they are expected to continue canvassing local neighborhoods to promote the benefits of the Biden presidency to would-be voters.

A breaking point for many progressives came late last month when Senate Republicans used a parliamentary rule known as the filibuster to block the creation of an independent commission to investigate the Jan. 6 attack on the U.S. Capitol. In the weeks since, progressive calls for Democrats to abandon negotiations with Republicans on other measures and kill the filibuster have intensified.

While Senate Democrats do not have the votes at the moment to do that, party leaders know they must deliver soon. A coalition of more than 60 national progressive groups signed a letter late last week insisting that Democrats abandon negotiations with Republicans and push through a sweeping infrastructure package on their own.

Pennsylvania Lt. Gov. John Fetterman, who is running to replace retiring Republican Sen. Pat Toomey, says it’s past time for Democrats to “employ whatever tactic necessary” — including ending the filibuster — to adopt progressive policies on voting rights, the minimum wage and infrastructure.

“I wouldn’t call it frustration. I’d call it disappointment,” Fetterman told The Associated Press. “It’s kind of gut-check time on the Democratic side.”

“These are not normal times,” Fetterman continued. “When you have an opportunity to pass transformative policies, you have to, even if it could cost you your political career.”

At the same time, Black voters have been especially troubled by the Democrats’ inability to block a wave of Republican-backed election reforms in key states that would make it more difficult for people of color to vote in future elections.

NAACP President Derrick Johnson was among a group of civil rights leaders who met last week with Democratic Sen. Joe Manchin of West Virginia, who has refused to support calls to end the filibuster and, because of the balance of power in the Senate, can single-handedly preserve the controversial parliamentary rule.

Manchin did not bend in the meeting but agreed to “continue to dialogue,” according to Johnson.

The civil rights leader declined to predict a “doomsday scenario” in which Black voters abandon congressional Democrats in the midterms for not taking action, saying, “Congress must act to protect us.”

Amid the mounting anxiety, Sen. Bernie Sanders, the Vermont independent who has been the face of the Democrats’ far-left wing for a generation, is largely optimistic.

In an interview, the self-described democratic socialist praised Biden for offering “a blueprint for transformative change.” Sanders also expressed confidence that the Biden administration would soon abandon negotiations with Republicans in favor of an even bigger budget reconciliation bill he's writing in the Senate Budget Committee.

Sanders described the bill as “the most consequential piece of legislation for working people since 1930s.” “You want big and bold? Underline big and bold,” Sanders told the AP.

When pressed, however, he acknowledged there is no guarantee that all 50 Senate Democrats would support the measure.

As some liberals argue the party hasn't done enough with its power, Republicans are hitting Democrats for doing too much to pursue a far-left agenda. Those attacks may be working.

A Fox News poll released late last month found that 46% of registered voters believed Biden's positions on the issues were too liberal, a 10-percentage-point jump from December. At the same time, however, 15% of self-described liberals said the Democratic president's positions were too conservative.

Meanwhile, the mood was somber back at the Edwardsville festival, even as the progressive activists enjoyed 3-for-$5 pierogis, crispy potato pancakes and fudge.

Claudia Glennan, 66, who described herself as a human rights activist, doesn't blame Democrats for the gridlock in Washington, even though they control the White House and Congress.

Democrats are in control only “in theory” because of the filibuster, she said. “Their hands are tied.”

“I know we’re supposed to keep positive, but it’s hard,” Glennan said. “I'm trying not to get depressed.”