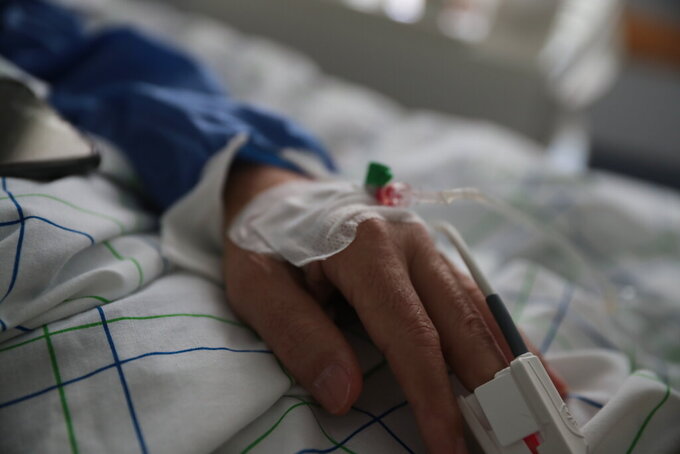 In this photo taken on Wednesday, April 15, 2020, a COVID-19 patient lies on a bed at one of the intensive care units (ICU) of the Moulay Abdellah hospital in Sale, Morocco. Coronavirus has upended life for Morocco's medical workers. They enjoy better medical facilities than in much of Africa but are often short of the equipment available in European hospitals, which also found themselves overwhelmed. (AP Photo/Mosa'ab Elshamy)

RABAT, Morocco (AP) — When Moroccan nurse Mofadal Ahyane lost his first patient to COVID-19, he had a recurring nightmare: His patient in agony slips from his body, which gradually transforms into Ahyane's own father, then brother, then friend.

“The death of that man will never leave me as long as I live,” Ahyane said, his voice cracking as he recalled the vain efforts of doctors and nurses at the hospital in the northern city of Tetouan to save the man’s life.

The virus has upended life for Morocco's medical workers. They enjoy better medical facilities than in much of Africa but are often short of the equipment available in European hospitals, which also found themselves overwhelmed.

Medical professionals around this Muslim kingdom in North Africa spoke to The Associated Press, showing that the heartbreak and fears and the challenges of working safely are shared with Western counterparts, as is the devotion to saving lives.

Two Moroccan doctors have died after becoming infected, officials have said. Morocco, which is under a strict lockdown, currently has more than 4,500 confirmed cases and some 170 deaths, according to a Johns Hopkins University count.

Since early March, the Moroccan government has steadily introduced virus control measures that have gradually turned vibrant cities into near ghost towns. Health minister Khalid Ait Boutaleb says that if it weren’t for preventive measures, Morocco would now be facing 6,000 coronavirus-related deaths.

Still, the virus has wrought personal havoc for some health workers, temporarily tearing them apart their families as they self-isolate at the end of the day to keep their loved ones safe.

Radiology nurse Iman Benali at Casablanca’s Sidi Moumen Hospital has been away from her husband and 6-year-old child since early March. Some nurses working with Benali had to stop breastfeeding their infants when duty called, she said.

Her long days end in self-isolation at a hotel with 70 other medical professionals. The hotel housekeepers are also forced to exchange families for hotel rooms because of their contact with the health professionals.

Benali said the sacrifices shared with co-workers has created a special bond.

“We watch out for each other out of compassion, but also out of fear for our own health,” she said. “If a hospital worker gets contaminated, it means the entire hospital workforce may be contaminated.”

At Moulay Abdellah Hospital in Morocco's Atlantic coastal city of Sale, Dr. Youssef Dhabi said he believes the deaths of his colleagues are a driving force for caregivers.

“If the deceased doctors were given a chance to return to work, they would take it instantly. You’d find them in their protective gear, treating patients," he said.

During his 12-hour shift, nurse Ahyane rarely eats because he fears contamination. “You wonder, are your hands clean enough to eat?” he says.

Dr. Houcine Benazouz doesn't even consider eating. Since early March, he has been running between departments at the Tetouan hospital. At night, he stays in a white, impersonal hotel room far from the comfort of his loved ones.

“It has to be the hardest choice I made, leaving my wife and children behind me," he said.

Nabil Zouini, who works with a testing task force in his hometown of Meknes, hasn't been home in over a month, something his 3-year-old daughter can't understand.

“She smiles at me every night and asks me: ‘Dad, are you coming back home tomorrow?’” Zouini said of his video chats with his child. “If I say no, she cries.”

Zouini dons a new mask and gown at every encounter with suspected cases, but he is never certain he's safe.

“The hardest part is taking the gown off. We have to do it in a way that we don’t touch the outside of the suit, which is fully contaminated. We can only take off the suit from the inside out.” He removes gowns at least 10 times a day.

It's now beginning to feel like the ancient ramparts of Meknes are closing in.

“The psychological turmoil is incredibly hard,” he said. “Many of us will be scarred by what we see.”

Zouini described an eerie emptiness in the streets of his city, an image that collides with the once-lively ambiance of Meknes, which in normal times draws tourists from around the world.

“As I drive to homes of suspected cases, my eyes flash for a second and I see the cafés, the playgrounds buzzing with life ... before I'm brought back to reality," he said.

Using a typical Moroccan expression that may speak to all the country's health workers, Zouini added: “I say to myself, we can’t meet each other today, but we will hug tomorrow.”