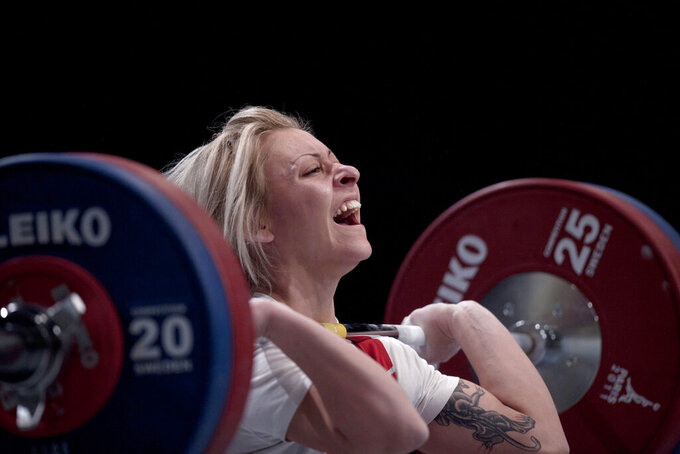 FILE - In this Sunday Nov. 6, 2011 file photo, Boyanka Kostova from Azerbaidjan competes in the Women's 53kg category at the World Weightlifting Championships, in Paris. Former world champion weightlifter Boyanka Kostova was banned for eight years for doping on Thursday Sept. 30, 2021, after making her comeback from an earlier sanction for performance-enhancing drug use at the Olympics. (AP Photo/Thibault Camus, File)

LAUSANNE, Switzerland (AP) — Former world champion weightlifter Boyanka Kostova was banned for eight years for doping on Thursday after making her comeback from an earlier sanction for performance-enhancing drug use at the Olympics.

The International Testing Agency said Kostova tested positive for traces of the steroid stanozolol on her way to winning the European championship title in the 59-kilogram category in April. She was born in Bulgaria but later switched allegiance to Azerbaijan, which lavishly funded her bids for Olympic medals.

Kostova was banned from 2016 through 2018 after a reanalysis of her sample from the 2012 Olympics, where she placed fifth, found the steroid turinabol.

Kostova was the 2015 world champion and world record holder in the old 58-kilogram category but was prevented from competing at the Olympics the following year in Rio de Janeiro amid her first doping case. Despite her European title, she didn't compete at this year's Olympics in Tokyo because she didn't have enough valid results during the qualifying period.

On Monday, the ITA also announced doping bans for three Russian weightlifters including two-time European champion Andrei Demanov. The cases were based on re-examining evidence of past doping and cover-ups within Russia. None of the three had competed recently.