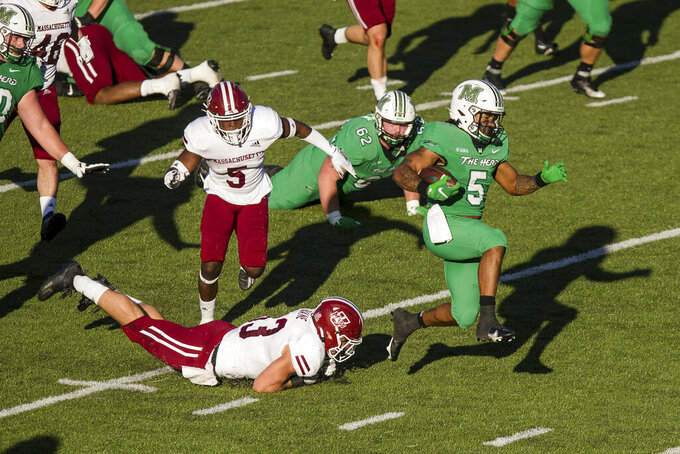 Marshall running back Sheldon Evans (5) breaks through the Massachusetts defense on his way to a touchdown during an NCAA college football game Saturday, Nov. 7, 2020, in Huntington, W.Va. (Sholten Singer/The Herald-Dispatch via AP)

HUNTINGTON, W.Va. (AP) — Once Brenden Knox got the ball, No. 16 Marshall was off and running.

The game was added to Marshall’s schedule last month after several other opponents had previously pulled out due to the coronavirus pandemic.

Marshall (6-0) continued to produce a season-long balance on offense that keeps opponents guessing. Knox scored on runs of 45 and 14 yards and got nearly all of his 118 yards in the first half.

It was his fifth straight game over 100 yards.

“We just try to go fast, just get the ball rolling early and keep it rolling," Knox said.

“We treat everybody the same. Overlook no opponent,” Gaines said. "We do what we have to do to win.”

The Thundering Herd held UMass scoreless in the second half.

Massachusetts (0-2) has 22 true or redshirt freshmen on its depth chart. Wells took advantage of a UMass secondary that consisted entirely of freshmen and sophomores and completed 21 of 30 passes for 228 yards.

“I’ve been around some really good, G5 football," UMass coach Walt Bell said, referring to the so-called group of five conferences. "I’m not sure this isn’t one of the better G5 teams I’ve seen. They’re going to have pretty good success.”

Massachusetts freshman Will Koch moved the ball at times in his first career start, but it was a lot to ask a young quarterback to do against the nation's sixth-best defense.

Both of the Minutemen's scoring drives came in the first half with the help of some trickery.

A 37-yard flea flicker from Koch to tight end Taylor Edwards, along with two 15-yard penalties against Marshall, moved the ball downfield and led to Koch's 2-yard TD toss to Samuel Emilus.

Freshman running back Jared Cole later threw a 25-yard pass to Josiah Johnson to set up a field goal late in the second quarter.

Wells then moved Marshall downfield in six plays, hitting running back Sheldon Evans with a 11-yard scoring pass for a 31-10 halftime lead.

“Our standards and expectations are extremely high," Holliday said. “What great teams do when you get this opportunity, you go out and start fast, and we did that. I knew after that first series we were going to be OK. They were listening. They were locked in.”

UMass converted on fourth down from its 34 late in the third quarter. But on the next play, Jamare Edwards stripped the ball from Koch, and Marshall's Darius Hodge picked up the loose ball and advanced it to the Minutemen 16.

Wells hit Gaines in the end zone two plays later to put Marshall ahead 44-10. Gaines, who also had a 13-yard TD grab later in the period, has helped minimize the loss of top receiver Broc Thompson to injury last month.

Koch finished 12 of 18 for 99 yards before being replaced in the fourth quarter by redshirt freshman Garrett Dzuro.

Massachusetts: The overmatched Minutemen are playing a patchwork four-game schedule after initially canceling, then reviving their season due to the pandemic. They hadn’t played since a 41-0 loss at Georgia Southern on Oct. 17.

Marshall: The Thundering Herd had 33 first downs while the defense set the tone with 10 tackles for loss, including four sacks, and allowed just 41 rushing yards.

A blowout win over a young opponent playing just its second game of the season shouldn’t do much to boost Marshall's chances of moving up in the AP Top 25 poll.

UMass plays at Florida Atlantic on Friday, Nov. 20. The Minutemen added the game on Friday.

Marshall hosts Middle Tennessee next Saturday on the 50th anniversary of a Nov. 14, 1970, plane crash that killed 75 people, including 36 Thundering Herd players.