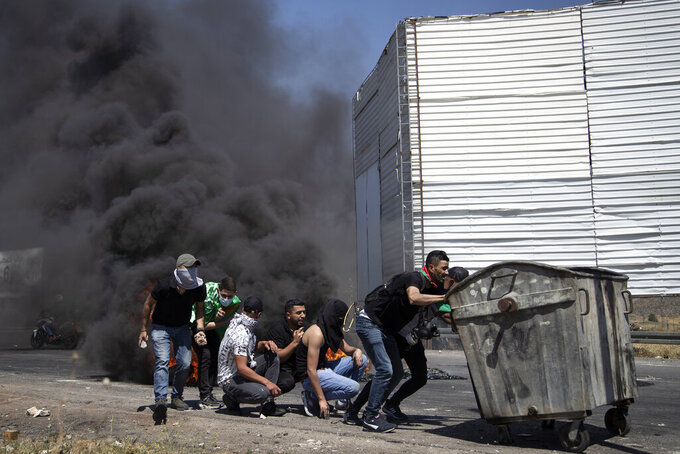 Palestinian demonstrators take cover during clashes with Israeli forces at the Hawara checkpoint, south of the West Bank city of Nablus, Friday, May 14, 2021. Health officials say several Palestinians were killed by Israeli army fire, at protests that took place in several locations across the West Bank of Friday. (AP Photo/Majdi Mohammed)

GAZA CITY, Gaza Strip (AP) — Turmoil from the battle between Israel and Hamas spilled over into the West Bank on Friday, sparking the most widespread Palestinian protests in years as hundreds of young demonstrators in multiple towns clashed with Israeli troops, who shot and killed at least 11 people.

Israel's bombardment of the Gaza Strip continued into early Saturday, when an airstrike on a house in Gaza City killed at least seven Palestinians — the highest number of fatalities in a single hit. That strike came a day after a furious overnight barrage of tank fire and airstrikes that wreaked destruction in some towns, killed a family of six in their house and sent thousands fleeing their homes.

The Israeli military said the operation involved 160 warplanes dropping some 80 tons of explosives over the course of 40 minutes and succeeded in destroying a network of tunnels used by Hamas to elude airstrikes and surveillance.

Israel appeared determined to inflict as much damage as possible on Gaza’s Hamas rulers before international efforts for a cease-fire accelerated. Since Monday night, Hamas has fired hundreds of rockets into Israel, which has pounded the Gaza Strip with strikes. In Gaza, at least 126 people have been killed, including 31 children and 20 women; in Israel, seven people have been killed, including a 6-year-old boy and a soldier.

Houda Ouda said she and her extended family ran frantically into their home in the Gaza town of Beit Hanoun, seeking safety as the earth shook in the darkness.

“We even did not dare to look from the window to know what is being hit,” she said. When daylight came, she saw the destruction: streets cratered, buildings crushed or with facades blown off, an olive tree burned bare, dust covering everything.

The latest airstrike targeted a three-story house on the edge of a refugee camp. Said Alghoul, who lives nearby, said Israeli warplanes dropped at least three bombs on the home without warning residents in advance.

“I could not endure and ran back to my home,” he said. Rescuers called a bulldozer to dig through the rubble for survivors or bodies.

Shortly afterward, Hamas said it fired a salvo of rockets at southern Israel in response to the airstrike.

The conflict, which was sparked by tensions in Jerusalem during the past month, has reverberated widely. Israeli cities with mixed Arab and Jewish populations have seen daily violence, with mobs from each community clashing and trashing each other’s property. New clashes broke out Friday in the coastal city of Acre.

In the occupied West Bank, on the outskirts of Ramallah, Nablus and other towns and cities, hundreds of Palestinians protested against the Gaza campaign and Israeli actions in Jerusalem. Waving Palestinian flags, they trucked in tires that they set up in burning barricades and hurled stones at Israeli soldiers. At least 10 protesters were shot and killed by soldiers. An 11th Palestinian was killed when he tried to stab a soldier at a military position.

In east Jerusalem, online video showed young Jewish nationalists firing pistols as they traded volleys of stone with Palestinians in Sheikh Jarrah, which became a flashpoint for tensions over attempts by settlers to forcibly evict a number of Palestinian families from their homes.

On Israel's northern border, troops opened fire when a group of Lebanese and Palestinian protesters on the other side cut through the border fence and briefly crossed. One Lebanese was killed. Three rockets were fired toward Israel from neighboring Syria, but they either landed in Syrian territory or in empty areas, Israeli media said. It was not immediately known who fired them.

The spiraling violence has raised fears of a new Palestinian “intifada,” or uprising, at a time when the peace process has been virtually nonexistent for years. The tensions began in east Jerusalem earlier this month, with Palestinian protests against the Sheikh Jarrah evictions and Israeli police measures at Al-Aqsa Mosque, a frequent flashpoint located on a mount in the Old City revered by Muslims and Jews.

Hamas fired rockets toward Jerusalem late Monday, in an apparent attempt to present itself as the champion of the protesters. In the conflict that spiraled from there, Israel says it wants to inflict as much damage as it can on Hamas’ military infrastructure in Gaza.

Prime Minister Benjamin Netanyahu vowed that Hamas would “pay a very heavy price” for its rocket attacks. Israel called up 9,000 reservists Thursday to join its troops massed at the Gaza border.

An Egyptian intelligence official said Israel had turned down an Egyptian proposal for a one-year cease-fire that Hamas had accepted. The official, who was close to Egypt’s talks with both sides, spoke on condition of anonymity to discuss the internal negotiations.

On Friday, the U.S. deputy assistant secretary of state for Israel-Palestinian affairs, Hady Amr, arrived in Israel as part of an attempt by Washington to de-escalate the conflict.

U.S. President Joe Biden gave a show of support to Netanyahu in a call a day earlier, saying “there has not been a significant overreaction” in Israel’s response to Hamas rockets. He said the aim is to get a “significant reduction in attacks, particularly rocket attacks.”

Hamas has fired some 2,000 rockets toward Israel since Monday, according to the Israeli military. Most have been intercepted by anti-missile defenses, but they have brought life to a standstill in southern Israeli cities, caused disruptions at airports and have set off air raid sirens in Tel Aviv and Jerusalem.

Rafat Tanani, his pregnant wife and four children, ages 7 and under, were killed after an Israeli warplane reduced their four-story apartment building to rubble in the neighboring town of Beit Lahia, residents said. Four strikes hit the building, Rafat’s brother Fadi said. The building’s owner and his wife also were killed.

“It was a massacre,” said Sadallah Tanani, another relative. “My feelings are indescribable.”

When the sun rose Friday, residents streamed out of the area in pickup trucks, on donkeys and on foot, taking pillows, blankets, pots and pans and bread. Thousands took shelter inside 16 schools run by the United Nations relief agency UNWRA, agency spokesman Adnan Abu Hasna said.

Mohammed Ghabayen, who took refuge in a school with his family, said his children had eaten nothing since the day before, and they had no mattresses to sleep on. “And this is in the shadow of the coronavirus crisis,” he said. “We don’t know whether to take precautions for the coronavirus or the rockets or what to do exactly.”

Israeli military officials cheered the operation as a successful blow against the tunnel network. Lt. Col. Jonathan Conricus, a military spokesman, said 160 warplanes operated in a “synchronized manner” for about 40 minutes as part of the operation.

He said the military aims to minimize collateral damage in striking military targets. But measures the military takes in other strikes, such as warning shots to get civilians to leave, were not “feasible this time.”

Military correspondents in Israeli media said the military believed dozens of militants were killed inside the tunnels. The Hamas and Islamic Jihad militant groups have confirmed 20 deaths in their ranks, but the Israeli military said the real number is far higher.

“We turned the tunnels which they thought were death traps for our soldiers into traps for them.” Reserve Air Force Col. Koby Regev said on Israeli television.