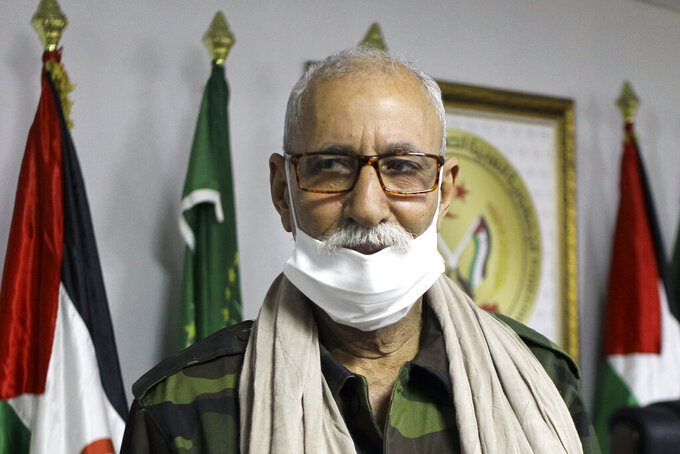 FILE - In this Feb.26, 2021 file photo, Brahim Ghali, head of the Sahrawi Democratic Arab Republic and the Polisario Front, poses in the refugees camp of Tindouf, southern Algeria. Brahim Ghali was released from a hospital in northern Spain following more than six weeks of treatment after contracting COVID-19, according to a brief statement sent to the Associated Press by the self-declared Sahrawi Democratic Arab Republic. Ghali has long fought to break the Western Sahara away from Moroccan rule. (AP Photo/Fateh Guidoum, File)

MADRID (AP) — The leader of a movement seeking independence from Morocco who is at the center of a diplomatic row flew out of Spain to Algeria, arriving in the middle of the night before being taken to an Algerian military hospital Wednesday.

Brahim Ghali was released from a hospital in northern Spain following more than six weeks of treatment after contracting COVID-19, according to a statement sent to The Associated Press by the self-declared Sahrawi Arab Democratic Republic, which is based in refugee camps in western Algeria.

Morocco has denounced Spain, a strategic partner, for allowing Ghali to secretly enter the country. Morocco considers Ghali, 71, to be a terrorist. Amid the dispute, thousands of migrants crossed the border from Morocco into Spain as Moroccan authorities appeared to relax border controls last month.

After Ghali's arrival in Algeria on Wednesday, he was taken to the Ain Naadja military hospital — and received a visit from Algerian President Abdelmadjid Tebboune and army chief of staff Said Chengriha, according to Algerian state news agency APS. Algerian state television showed images of the visit, with Ghali hooked up to an oxygen machine.

Ghali is the leader of the Polisario Front, an Algeria-backed pro-independence movement representing the local Sahrawi people of Africa’s mineral-rich Western Sahara, and of the self-declared Sahrawi Arab Democratic Republic. Morocco annexed the Western Sahara in the 1970s after Spain’s colonial administration ended. It considers the vast territory part and parcel of the Moroccan kingdom. The Polisario Front has long tried to end Moroccan rule over the region.

Ghali departed hours after testifying Tuesday via videoconference in a Spanish investigation into allegations against him of torture, genocide and other crimes. A Spanish magistrate ruled after Ghali’s testimony that he should remain free while the investigation continues.

Ghali flew out of Pamplona airport.

Ghali thanked Algeria for its support, according to APS. The Algerian president praised Ghali for testifying in the Spanish investigation. “You gave the Sahrawi Arab Democratic Republic the image of a state of law. It is in the nature of revolutionaries and militants to respect the law.”

There was no official public reaction Wednesday from Morocco to Ghali's departure.

The representative in Algeria for the self-declared state said Ghali arrived in Algiers at 3 a.m. to continue his recovery. Abdelkader Taleb Omar said on Algerian radio that the “expansionist Moroccan regime has bit the dust with a sharp diplomatic failure.”

Ghali's presence in Spain infuriated Morocco and triggered a diplomatic crisis between the two countries, which have been cooperating in fighting terrorism, drug smuggling and migration into Europe.

In a stinging rebuke, Moroccan authorities also questioned publicly whether Spain could be trusted.

Spain, like most other Western countries, has urged a negotiated solution through the United Nations to the question of Western Sahara's future. But the issue became clouded last December when the U.S. Trump administration formally recognized Morocco's sovereignty over Western Sahara in return for Rabat’s normalization of ties with Israel.

“We have to let high diplomacy do its work,” she told reporters.

But she also pushed back against Rabat's pressure.

“Spain enjoys national sovereignty, so Spanish foreign policy is decided by its government, its parliament, and our decision-making on international issues cannot be subjected to any conditionality,” she said.

Ghali checked into the Spanish hospital under a false identity after arriving by plane last month with an Algerian diplomatic passport and with the consent of the Spanish government, which said it acted on humanitarian grounds.

Rabat withdrew its ambassador to Madrid and said it wouldn’t fill the position if Ghali left Spain under the same cloak of secrecy.