What They Want: Divergent goals for Biden, Putin at summit 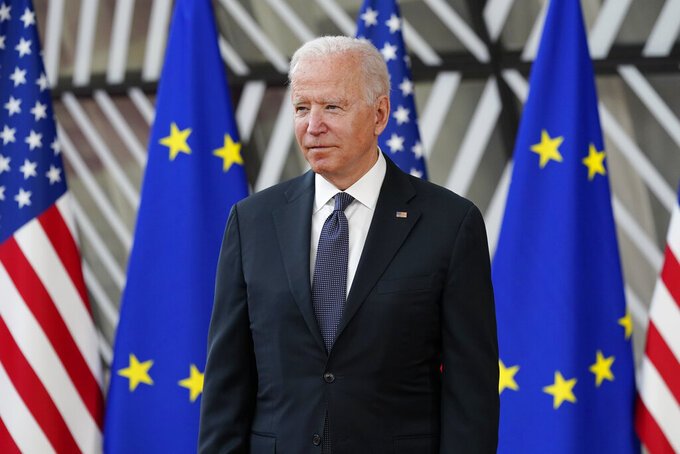 GENEVA (AP) — An American president won’t side with Moscow over his own intelligence agencies. There will be no talk of a “reset” in Russian relations. And it is highly doubtful that anyone will gaze into Vladimir Putin’s eyes and discuss his soul.

But beyond that, it’s not clear what will happen Wednesday in Geneva when President Joe Biden meets Putin for the first time since taking office. Both sides acknowledge that the relationship between the two nations is dismal and neither holds out much hope for meaningful areas of agreement. Still, each man brings his own goals to the summit table.

A look at what each president is hoping to achieve in Switzerland:

Biden and his aides have made clear that he will not follow in the footsteps of his recent predecessors by aiming to radically alter the United States’ ties to Russia. Instead, the White House is looking for a more modest though still vitally important goal: to move toward a more predictable relationship and attempt to rein in Russia’s disruptive behavior.

Biden’s first overseas trip was deliberately sequenced so that he will meet with Putin only after spending days meeting with European allies and powerful democracies, including a gathering at NATO, the decades-old alliance formed to serve as a bulwark to Russian aggression. He hoped to project a sense of unity and renewed cooperation after four years of tumult under former President Donald Trump, who often tried to cozy up to the Russian president.

Biden will push Putin to stop meddling in democratic elections, to ease tensions with Ukraine and to stop giving safe harbor to hackers carrying out cyber and ransomware attacks. Aides believe that lowering the temperature with Russia will also reinforce the United States' ties to democracies existing in Moscow’s shadow.

National security adviser Jake Sullivan said Biden will look for “areas where, in our common interest, we can work together to produce outcomes that are — that work for the United States and for the American people."

Sullivan, who briefed reporters on Air Force One heading to Brussels for the NATO summit, said that Biden's other message would be more stick than carrot: “How do we send a clear message about those harmful activities that we will not tolerate and to which we will respond?”

There have been brief moments of common ground. Moscow and Washington have shown a shared interest in restarting talks on strategic stability to work out a follow-up deal to the New START, the last remaining U.S.-Russian arms control pact that was extended for five years in January.

Biden will exhort Putin on human rights, including the poisoning and imprisonment of opposition leader Alexei Navalny, not to support the regime in Belarus that carried out a recent skyjacking and to stop interfering with other nations’ elections. Cyber will also be a focal point, with the Geneva summit coming just days after NATO expanded its Article 5 mutual defense pact to include cyberattacks.

But the president acknowledged that there may be no way to keep Putin in check.

“There’s no guarantee you can change a person’s behavior or the behavior of his country. Autocrats have enormous power and they don’t have to answer to a public,” said Biden during a news conference Sunday after the Group of Seven summit in England. “And the fact is that it may very well be, if I respond in kind — which I will — that it doesn’t dissuade him and he wants to keep going.”

Biden had not minced words when it comes to assessing Putin. He said in an interview earlier this year that he agreed with an assessment that Putin was a “killer,” and he once declared that Putin didn’t have a soul.

That was far colder rhetoric than that of his immediate predecessors.

Trump spoke warmly of Putin and was deferential to him during their one summit, held in Helsinki in 2018, in which he turned his back on his own intelligence agencies. President Barack Obama’s administration, though wary of Putin, expressed hope in a “reset” and improvement of relations with Moscow. And George W. Bush said that he “looked the man in the eye” and “found him very straightforward and trustworthy.”

“I was able to get a sense of his soul," Bush said.

Putin also won’t be expecting to warm up ties. His main goal will be to draw his red lines for the new U.S. administration and negotiate a tense status quo that would protect Moscow’s vital interests.

The Russian leader doesn’t hope for a new détente to mend the rift caused by Russia’s 2014 annexation of Ukraine’s Crimean Peninsula. Nor does he count on a rollback of the crippling U.S. and EU sanctions that have restricted Moscow’s access to global financial markets and top Western technologies.

Putin’s task now is more modest — to spell out Russia’s top security concerns and try to restore basic channels of communication that would prevent an even more dangerous destabilization.

The main red line for Moscow is Ukraine’s aspirations to join NATO. Fearing its bid for the alliance membership, Putin responded to the 2014 ouster of Ukraine’s Russia-friendly president by annexing Crimea and throwing Moscow’s weight behind a separatist insurgency in the country’s eastern industrial heartland, where the seven-year conflict has killed more than 14,000.

When tensions along the line of contact in Ukraine’s east rose earlier this year, Russia quickly beefed up its troops near Ukraine and warned Kyiv's leaders that it would intervene militarily if they tried to reclaim the rebel-controlled regions by force.

Moscow has since pulled back some of its forces from the border areas, but the Ukrainian leadership has said the bulk of them have remained close to the border.

In an interview with state TV last week, Putin described Ukraine’s bid to join NATO as an existential challenge to Russia that would allow the alliance’s missiles to hit Moscow and other targets in western Russia in just seven minutes. He compared it to Russia deploying its missiles in Canada or Mexico near the U.S. border. “Isn’t it a red line?” he said.

While taking a tough stance on Ukraine, the Russian leader could show a degree of flexibility on other global hotspots.

Even though Moscow has been critical of the U.S.-led military campaign in Afghanistan, it’s interested in a settlement that would prevent the country from plunging into chaos following the U.S. troops’ withdrawal later this year, fearing that instability could spill into ex-Soviet Central Asia.

Russia also has been involved in painstaking international talks to help repair a nuclear deal with Iran that was spiked by Trump, and it has expressed a willingness to cooperate with the U.S. in efforts to restart the stalled Mideast peace talks.

And the Kremlin would be interested in working out a deal on Syria, where Moscow’s military campaign helped President Bashar Assad’s government reclaim control over most of the country after a devastating civil war and the U.S. has maintained a limited military presence.

Russia has said it’s ready to include its prospective doomsday weapons — such as the Poseidon atomic-powered, nuclear-armed underwater drone and the Burevestnik nuclear-powered cruise missile — in the talks on condition the U.S. brings its missile defense and possible space-based weapons into the equation.

Putin also has emphasized Russia’s readiness to make joint efforts to address climate change and cope with the coronavirus pandemic.

He called for establishing a dialogue on cybercrime, noting that Moscow could agree to extradite cybercrime suspects to the U.S. if Washington assumes the same obligation.

The White House has strongly downplayed the idea of a cybercriminal prisoner exchange.