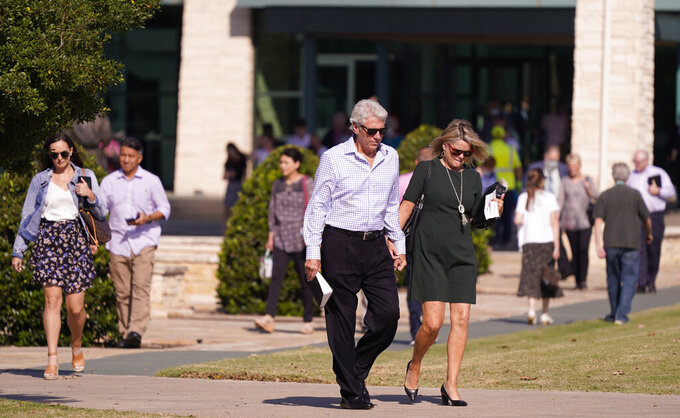 Members of Prestonwood Baptist Church walk from the church after morning services Sunday, Oct. 11, 2020, in Plano, Texas. Three weeks before the U.S. presidential election, an evangelical church in a Dallas suburb has emerged as a front for Republicans fighting to keep the diversifying state from flipping to Democratic presidential candidate Joe Biden. (AP Photo/LM Otero) 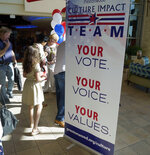 PLANO, Texas (AP) — As parishioners at the evangelical church in the Dallas suburbs gathered for Sunday services, they walked past two tables of voter guides and sample ballots in the lobby, with signs reading: “Your vote. Your voice. Your values.”

The message from the pulpit at the 9:30 a.m. service was equally explicit.

"“The future of America is at stake,” said Rev. Jack N. Graham, who had recently returned from Washington, where he attended a White House ceremony introducing Judge Amy Coney Barrett as President Donald Trump's latest Supreme Court nominee. “We are staring down the lies of the enemy.”

Three weeks from Election Day, the largely white congregation at Prestonwood Baptist Church, as well as other white evangelical churches across Texas, are fighting a defensive battle to keep their increasingly diverse state from flipping to support for Democratic presidential nominee Joe Biden. They've stood with Trump throughout his tumultuous tenure, including his uneven handling of the coronavirus pandemic this year, and view the late-in-the-campaign Supreme Court opening as a timely reminder of why.

“These confirmation hearings could not have come at a more opportune time for the Trump campaign,” said the Rev. Robert Jeffress, a leader of another of the Dallas area’s large, politically influential evangelical megachurches. “It’s a wake-up call and reminder especially for evangelicals about why they voted for Trump in the first place.”

White evangelicals hold significant sway in Texas, comprising 24% of the state's voters in 2018, according to an AP VoteCast survey. These voters overwhelmingly backed Republican candidates in congressional races, 87% to 12%.

But Texas is becoming more racially and ethnically diverse as the economy draws more people from out of state who are better educated overall, more urban and suburban, and more Democratic. In a state that hasn't backed a Democrat for president since 1976, polls show a close contest between Biden and Trump. Biden's wife, Jill Biden, will travel to the state Tuesday to encourage early voting.

Collin County, home to much of the Prestonwood Baptist Church's congregation, north of Dallas, is among those that will be closely watched on Election Day for signs of whether the state is tipping. The last Democrat to carry the county in a presidential race was Texas native Lyndon Johnson in 1964, and all five members of its governing board are still Republicans.

Not long ago in Collin County, “you’d go and vote and there was barely even Democrats on the ballot to vote for,” said Lorenzo Sanchez, a 35-year-old former real estate person making his first run for a Texas House seat. Democrats used to enter candidates for as few as two of the county’s roughly 30 races, knowing they’d lose, county Democratic Party chair Mike Rawlins said.

But over the past decade, the affluent county has grown by a quarter-million people, with newcomers — many of them Democratic, and of Black, Hispanic and Asian heritage — drawn by good jobs as Toyota, Raytheon and other corporations settle in the area.

The impact on the county's politics has been striking. Democrat Beto O’Rourke won a surprising 46% of the county’s vote against Ted Cruz for the U.S. Senate in 2018. More Democrats are entering races for local and state offices from the county, helping to draw out Democratic voters.

Now old and new political camps “are fighting it out to see which way” it goes in Collin County, Sanchez said.

He spoke in the parking lot of a pizza place in McKinney, Texas, the county seat. Around him, Democratic Party voters were decorating their vehicles with posters and painted get-out-the-vote messages for Biden and local Democratic candidates.

The Democrats drew drivers of dozens of vehicles for the car rally, heading out in what was long hostile territory of Collin County. It still can be hostile — the first few cars out of the parking lot attracted a passing dark SUV that veered dangerously close. The SUV driver rolled down the window to flip off the Democrats, inches away.

Jeffress, the leader of the First Baptist Church of Dallas, also sees the changes underway in his state.

“The fact is … I believe Texas is going to turn blue,’’ he said. “But it’s probably not going to by November.”

To keep Democrats at bay in Texas for at least one more election, Republicans are urgently turning to the white evangelicals who have been a bulwark of the party's support.

Despite the United States’ troubles with the pandemic and economic crash, white evangelicals remain among the president’s most loyal supporters. The Trump administration has responded, including Secretary of State Mike Pompeo, who spoke to the congregation at Prestonwood Baptist Church last month — a far higher-ranked political speaker than Baptist churches in the Southwest usually draw.

The Rose Garden event is suspected as a possible superspreader for the virus, after Trump, first lady Melania Trump, several Trump aides and several others attending fell ill.

Dallas news media reported Graham declined to isolate himself after his possible exposure. On Sunday, he stood, appearing hale and fit, through two back-to-back services.

The church parking lot was crowded. Masking was a mixed bag in the congregation, and most of those who wore masks into the church took them off as they settled into the pews.

“Christians have fought the battle of abortion for six decades,” Graham noted Sunday, one of his more explicit political nods at the altar. Backing the service were live onstage brass and string sections and a drummer, floodlights and giant screens that made Graham hover over the stage larger than life.

Worshipper Christine Bush has noted the appeals from Graham and others. She skipped voting in 2016, but says she will cast a ballot this time, motivated partly by what she sees as the country’s growing political divides.

“There’s a lot more at stake right now,” she said, hitting on one of Trump’s campaign warnings. “This country is going to socialism if the Christians don’t get out” to vote.