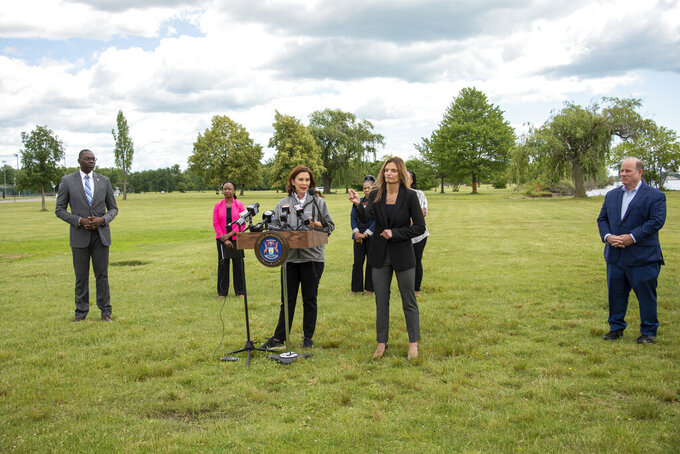 Michigan Gov. Gretchen Whitmer, center, speaks during a press conference on Belle Isle in Detroit, on Tuesday, June 22, 2021, announcing the end of COVID restrictions in the state. After facing 15 months of capacity restrictions and being hit by the country’s worst surge of coronavirus infections this spring, restaurants, entertainment businesses and other venues can operate at 100% occupancy starting Tuesday. (David Guralnick/Detroit News via AP)

The initiative, which the Democratic governor unveiled in Detroit while marking the end of major COVID-19 restrictions, would be funded with $100 million from the state's $6.5 billion in discretionary coronavirus aid approved by Congress and President Joe Biden in March. Frontline employees who worked between Nov. 1 and Jan. 31 and do not have an associate's or bachelor's degree would become eligible for the Futures for Frontliners program, joining 85,000 eligible applicants who worked on the front lines from April through June 2020, including more than 15,000 who are enrolled.

The plan would need approval from the Republican-controlled Legislature. GOP lawmakers have not embraced Whitmer's previous call to expand eligibility to an estimated 22,000 workers who became unemployed between Nov. 1 and Jan. 31, when infections surged again and government restrictions were tightened.

Whitmer said the $100 million would fully fund two years of college for those already enrolled and allow for the expansion.

“They saved and contributed to the saving of countless lives in our state,” she said. “It's not just gratitude, but it's opportunity that we want to create for them.”

Frontline workers include employees in health care, grocery stores, sanitation, public transportation and other critical sectors in which remote work is not possible.

It is uncertain how quickly legislators and the governor could begin to allocate federal funding over which they have discretion. Legislators most recently finalized the release of $2.2 billion in non-discretionary funds for food, rental and disaster assistance, along with payments to local governments.

About $4.4 billion in federal relief designated for K-12 schools remains on hold after the Senate removed $362 million that would ensure there is at least $1,093 more per pupil for districts that stand to receive less because they have fewer low-income students.

Talks continue on the next state budget. The fiscal year does not start until Oct. 1, but a 2019 law requires lawmakers to send Whitmer 2021-22 spending bills no later than July 1. That law might be delayed if negotiations continue into the summer.

The governor has been revising her budget proposal to reflect the influx of federal funds and a large surplus of state revenues. She has called for eliminating a funding gap among K-12 districts, giving grants to businesses to temporarily pay at least $15 an hour, providing “hero pay” bonuses to frontline workers and upgrading state parks.