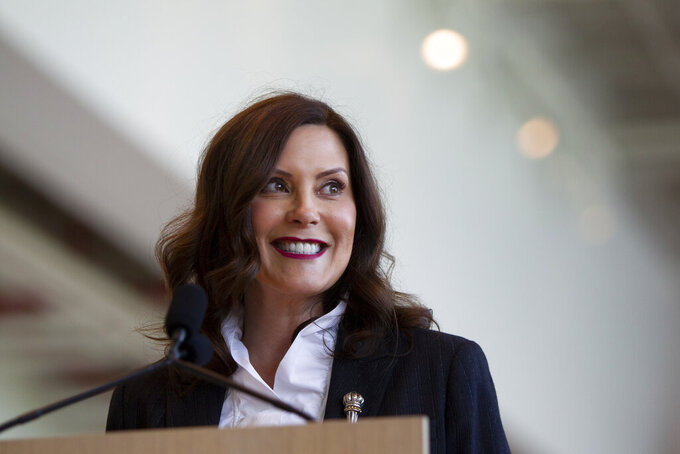 Gov. Gretchen Whitmer speaks at Steelcase in Grand Rapids, Mich., on Monday, May 24, 2021. It was the first day Steelcase is having many of their employees back in the office since the coronavirus pandemic started, thanks to the new MIOSHA rules that changed today, allowing non-essential workers to come back to offices. (Cory Morse/The Grand Rapids Press via AP)

An existing $418 gap between lower- and higher-funded schools would be fully closed.

The $664 million in proposed spending was outlined as part of a $2.6 billion plan to spend surplus state revenues and a portion of federal COVID-19 relief funding on education. Whitmer and the Republican-led Legislature want to finalize the next budget in the coming month.

“With the resources we have available to us thanks to federal aid and a state surplus, we can making lasting, transformative investments in our kids and schools that will have positive impacts for generations,” the governor said in a statement. She announced the framework at a school in Bay City.

About $350 million help schools facing lost enrollment — and less aid — due to the coronavirus pandemic. Other funds would boost spending on vocational and skilled trades programs, literacy coaches and provide a 2% funding increase for community colleges.

Days ago, state officials agreed that revenues are much higher than expected amid consumers' spending of federal stimulus checks and increased unemployment benefits for which more jobless workers are eligible in the pandemic.

“I am encouraged to see the governor recognize these priorities and build upon them. However, as we move forward, I hope the governor will recognize structural concerns to school finance in regard to pension costs," he said in a statement.

Albert said his primary focus is prioritizing in-person instruction and helping students catch up on learning lost in the pandemic.

In 1994, voters approved Proposal A, which replaced most property taxes levied for schools with an increased state sales tax. One of the promises was more funding equity among districts as the state assumed a greater share of school funding.

What began in the 1994-95 school year as a $2,300 difference between the minimum and maximum per-pupil grants is now $418. More than three-dozen other wealthier or far-flung “hold-harmless” districts with grants above the state-guaranteed maximum could still levy additional mills to get their statutory allowance.