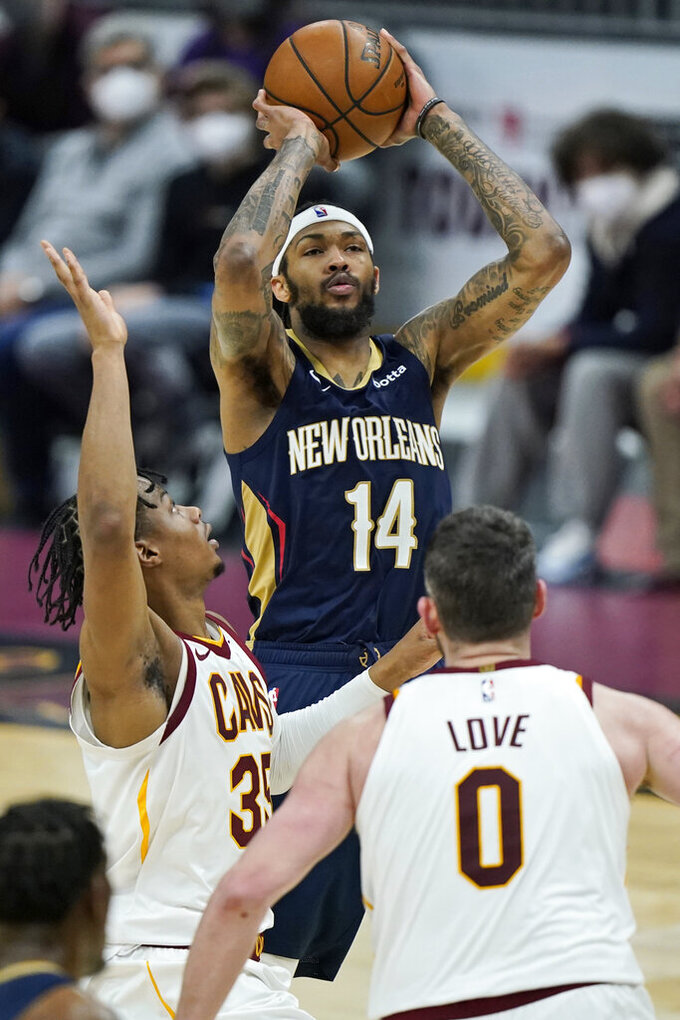 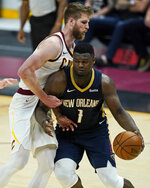 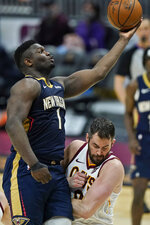 CLEVELAND (AP) — Zion Williamson scored 38 points and Brandon Ingram had 27 points and eight assists in rallying the New Orleans Pelicans to a 116-109 victory over the injury-plagued Cleveland Cavaliers on Sunday night.

Williamson, who scored 25 points in the first half, fell one shy of his career best of 39 set March 26 against Denver. He made 16 of 22 shots, grabbed nine rebounds and had four assists as New Orleans pulled within one game of the final play-in tournament spot in the West.

“You get so spoiled with Zion because he sets such a high standard that I didn’t think this was one of his better games,” Pelicans coach Stan Van Gundy said. “Then you look at the stat sheet and, whew, he had 38-9-4 even though I know he was tired out there.”

The Pelicans, who trailed by 13 points in the second quarter, went ahead for good at 108-107 on Ingram’s jumper with 2:33 remaining. Williamson followed with consecutive layups to extend the lead to five before Ingram iced the game from the line.

“Our intensity just went through the roof and pulled us through to the win,” Williamson said. “I’m glad that Coach expects me and (Ingram) to be better because we want him to continue to teach us. We know what’s expected from us on this team.”

One night earlier, the Cavaliers allowed a franchise-record 87 points in the first half and were routed 135-115 by Toronto at home. The Raptors didn’t play their top three scorers in Pascal Siakam, Fred VanVleet and Kyle Lowry.

“A lot of guys really stepped up — Dean Wade was awesome — and we responded in a tough spot tonight,” Love said. “We just gave up a little too much in the fourth and couldn’t make shots that we needed, myself included.”

Naji Marshall had 15 points for New Orleans, which won its second in a row. There were five lead changes in the final eight minutes with Cleveland taking its final advantage at 107-106 on Cedi Osman’s hoop.

Osman scored 15 points off the bench, while Matthew Dellavedova had seven points and 10 assists in his initial start of the season. Cleveland fell four games behind the last play-in position in the East.

“The last 7-8 minutes, we played pretty well,” Van Gundy said. “Outside of that, they played harder, more focused and better than we did, but we had better talent and we were able to finish it off.”

Cleveland carried a 68-62 edge into intermission. Wade scored 16 points before Jaxson Hayes banked in a 60-footer at the buzzer.

Cavaliers: G Dylan Windler (left knee soreness) missed his seventh straight game and G Damyean Dotson (left knee soreness) was a late scratch. Due to a series of injuries, Windler has only appeared in 31 games out of a possible 118 in his two-year career. … F Mfiondu Kabengele was the first big man off the bench against New Orleans. The nephew of Hall of Fame C Dikembe Mutombo signed a 10-day contract on Saturday.

Dellavedova has long been a fan favorite in Cleveland and his native Australia. Van Gundy also admires the eighth-year pro, who dished out 22 assists before committing his first turnover of the season. “He’s just a solid, team-oriented guy who is all about winning,” Van Gundy said. “You can never have too many of those guys.” Dellavedova made his season debut on April 1 after suffering a concussion in the preseason and undergoing an appendectomy.

Pelicans: Host Sacramento on Monday. The Kings have only played in New Orleans once in the last two seasons as a result of the COVID-19 pandemic.

Cavaliers: Visit Charlotte on Wednesday. Cleveland beat the Hornets 121-114 in its season opener on Dec. 23.