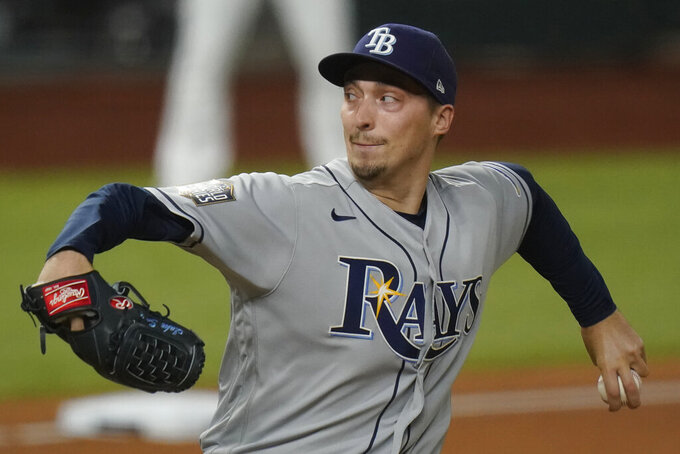 ARLINGTON, Texas (AP) — After winning the Division Series and AL Championship Series in San Diego, the Tampa Bay Rays played before fans in the World Series opener for the first time since spring training.

“Playing a playoff game with zero fans in it has got to be one of the weirdest, most bizarre things I’ve ever experienced in baseball,” Rays pitcher Charlie Morton, scheduled to start Game 3, said Wednesday. “But at the same time, one of the most memorable things I’ve ever experienced in baseball. I’ll appreciate everyone that made this possible for as long as I live.”

He appreciated the atmosphere at Globe Life Field, where the opener Tuesday drew a crowd of 11,388. That was about 28% of the 40,518 capacity at the new $1.2 billion retractable-roof stadium of the Texas Rangers.

“This stadium, even though it’s not filled to capacity, there’s something about this place,” Morton said. “It’s very robust. It’s big -- it feels big. They have the big screen right above the field. It’s feels like it’s like hanging on top of you and it’s got all the World Series logos. Everything’s in gold. All the banners you’d expect to see. But underneath in the service tunnel and in the clubhouse, it is weird to not see -- it’s weird to not be in the press room. That’s weird. It’s weird to go to the stadium and not see the parking lots just filled with people and local TV crews just hanging out. You name it. It’s weird. It’s sad. But it’s still very exciting.”

“He’s definitely a postseason stud,” Rays manager Kevin Cash said. “I think it’s the approach, the demeanor that he takes. You don’t see any difference. You don’t see any anxiety. It’s very much a been there, done that approach. And if you see anything, it’s that he has a knack for finding that extra gear.”

LA's plan for a bullpen game led to the shortest start in the World Series in six years.

Rookie Tony Gonsolin came out after 1 1/3 innings. The 26-year-old right-hander gave up Brandon Lowe's solo homer in the first, then walked Manuel Margot leading off the second. After Margot stole second and went to third on Joey Wendle's flyout to center, righty Dylan Floro replaced Gonsolin.

The last outing that short in the World Series was quite different. San Francisco's Jake Peavy gave up five runs in 1 1/3 innings in a 10-0 loss to Kansas City in Game 6 in 2014.

Four of the first six runs scored by the Rays in the World Series came from something other than the homer after they entered the Fall Classic with by far the largest ratio of runs via the long ball in postseason history.

Before the World Series, 41 of Tamps Bay's 57 postseason runs had come from homers. That 71.9% rate was substantially ahead of the previous high of 58.3% by Pittsburgh in 1971.

Kevin Kiermaier opened the scoring in Game 1 for Tampa Bay with a homer before he and Mike Brosseau had RBI singles. Brandon Lowe connected for a solo homer in the first inning of Game 2, followed by Joey Wendle's two-run double.

The percentage crept back up to 69% on Lowe's second homer of Game 2, a two-run shot in the fifth.

The Dodgers played their 15th game at the new $1.2 billion Globe Life Field, already half as many games as the Texas Rangers have played in their new ballpark that opened this season.

“It seems like we’re almost going to play as many games here as the Rangers this year,” Los Angeles manager Dave Roberts said. “It’s been great. To be honest with you, the clubhouse staff here, the facilities are amazing. Everything about this ballpark has been fantastic. Certainly, whether it be the workouts, the games played here, regular season, postseason, all of that stuff has helped make this feel more of a home field, and I definitely think it’s an advantage for us.”

Los Angeles played a three-game series there during the regular season in late August, then swept San Diego in the NL Division Series there before their comeback from a 3-1 deficit to beat the Atlanta Braves in a seven-game NL Championship Series last week.

If they win the World Series, the Dodgers would have 13 wins there this season — and the maximum number of games there is 20.

The Rangers went 16-14 at home during the pandemic-abbreviated season, but their overall 22-38 record was the worst in the American League.

Walker Buehler, who won Game 6 of the NLCS as the Dodgers won three straight elimination games to beat Atlanta, is the probable starter for Game 3 on Friday. It will be after the first scheduled day off in the middle of a postseason series in this pandemic-altered season.

Buehler has been dealing with blisters — manager Dave Roberts said during the NLCS it was actually two blisters sort of taking turns — throughout the postseason. He said the blisters were part of the reason for relying less on cutters.

“There's certain grips and things that put some pressure on it different ways,” Buehler said. “Also, just I think kind of lack of having fastball command can lead to some differences in the way that you approach different counts.”