Yellen: Failure to raise debt limit would be 'catastrophic' 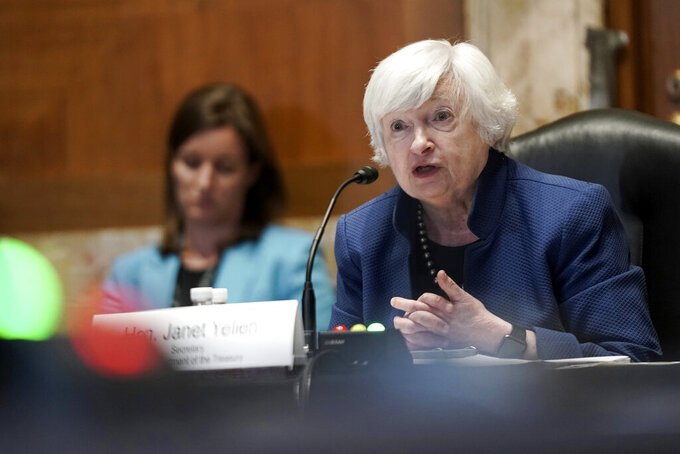 WASHINGTON (AP) — Treasury Secretary Janet Yellen told a congressional panel Wednesday that failing to raise the federal debt ceiling would have “catastrophic consequences” that could bring on a financial crisis.

Testifying before a Senate Appropriations subcommittee, Yellen said in response to questions that it is important Congress not delay in dealing with the debt limit, which has been suspended for the past two years.

That suspension is due to expire on July 31, when the limit will go back into effect at the level of debt at that time. The debt subject to the limit currently stands at $28.3 trillion. It has risen sharply over the past year as Congress has approved trillions of dollars in support packages to combat a recession caused by the COVID-19 pandemic.

Sen. Chris Van Hollen, D-Md., asked Yellen what would occur if Congress were to fail to either raise the debt ceiling or suspend it for a period of time so that the government could keep borrowing to meet its obligations, including making interest payments on the national debt.

Failure to make those debt payments would result in the federal government defaulting on its debt obligations, something that has never occurred in U.S. history. A standoff on raising the debt ceiling in 2011 resulted in a first-ever downgrade on a portion of the federal government's AAA-bond rating by the Standard & Poor's rating agency.

Yellen said defaulting on the national debt should be regarded as “unthinkable” because it would have “absolutely catastrophic consequences” that could precipitate a financial crisis.

“I would plead with Congress simply to protect the full faith and credit of the United States” by addressing the issue before the July 31 deadline.

The Treasury Department is able to use bookkeeping maneuvers, such as temporarily disinvesting government pension accounts, to keep the government from broaching the debt limit. But those measures can only buy a limited amount of time.

Yellen said it is hard to make an accurate forecast because of the large amount of uncertainty caused by the pandemic regarding payment flows and revenue collections.

She said it is possible Treasury could reach a point where it would be unable to pay the government's bills as soon as August, when Congress is scheduled to be out for its summer recess.