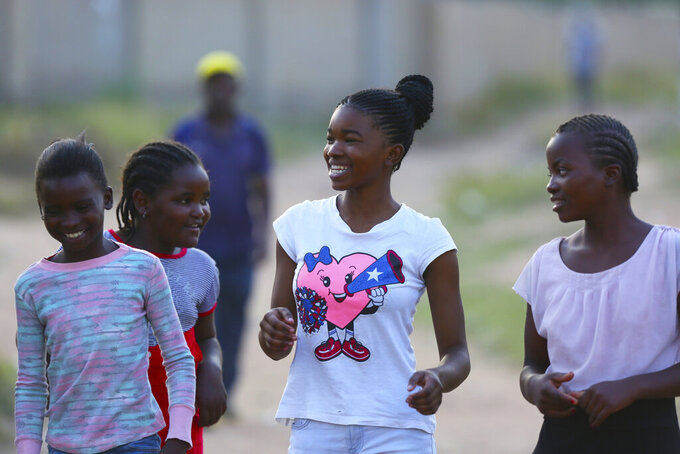 Natsiraishe Maritsa, center, shares a light moment with young boys and girls after a taekwondo training session in the Epworth settlement about 15 km southeast of the capital Harare, Saturday Nov. 7, 2020. In Zimbabwe, where girls as young as 10 are forced to marry due to poverty or traditional and religious practices, a teenage martial arts fan 17-year old Natsiraishe Maritsa is using the sport to give girls in an impoverished community a fighting chance at life. (AP Photo/Tsvangirayi Mukwazhi)

HARARE, Zimbabwe (AP) — In Zimbabwe, where girls as young as 10 are forced to marry due to poverty or traditional and religious practices, a teenage taekwondo enthusiast is using the sport to give girls in an impoverished community a fighting chance at life.

“Not many people do taekwondo here, so it’s fascinating for the girls, both married and single. I use it to get their attention,” said 17-year old Natsiraishe Maritsa, a martial arts fan since the age of 5 who is now using taekwondo to rally young girls and mothers to join hands and fight child marriage.

Children as young as four and some of Natsiraishe’s former schoolmates who are now married, line up on the tiny, dusty yard outside her parents’ home in the poor Epworth settlement, about 15 kilometers (9 miles) southeast of the capital, Harare.

They enthusiastically follow her instructions to stretch, kick, strike, punch and spar. After class, they talk about the dangers of child marriage. Holding their babies, the recently married girls took the lead.

One after the other, they narrated how their marriages have turned into bondage, including verbal and physical abuse, marital rape, pregnancy-related health complications, and being hungry.

“We are not ready for this thing called marriage. We are just too young for it,” Maritsa told The Associated Press after the session, which she said is “a safe space” for the girls to share ideas.

“The role of teen mothers is usually ignored when people campaign against child marriages. Here, I use their voices, their challenges, to discourage those young girls not yet married to stay off early sexual activity and marriage,” said Maritsa.

Neither boys nor girls may legally marry until the age of 18, according to Zimbabwean law enacted after the Constitutional Court in 2016 struck down earlier legislation that allowed girls to marry at 16.

Nonetheless, the practice remains widespread in the economically struggling southern African nation, where an estimated 30% of girls are married before reaching 18, according to the United Nations Children’s Fund. Child marriage is prevalent across Africa, and rising poverty amid the COVID-19 pandemic has increased pressures on families to marry off their young daughters.

For some poor families in Zimbabwe, marrying off a young daughter means one less burden, and the bride price paid by the husband is often “used by families as a means of survival,” according to Girls Not Brides, an organization that campaigns to end child marriages.

Some religious sects encourage girls as young as 10 to marry much older men for “spiritual guidance,” while some families, to avoid “shame,” force girls who engage in pre-marital sex to marry their boyfriends, according to the organization.

Maritsa, through her association called Vulnerable Underaged People’s Auditorium, is hoping to increase the confidence of both the married and single girls through the martial arts lessons and the discussions that follow.

Zimbabwe’s ban on public gatherings imposed as part of strict lockdown measures last week to try to slow an unprecedented surge in new COVID-19 infections have forced Maritsa to suspend the sessions, but she hopes to resume as soon as the lockdown is lifted.

“From being hopeless, the young mothers feel empowered ... being able to use their stories to dissuade other girls from falling into the same trap,” said Maritsa, who said she started the project in 2018 after seeing her friends leave school for marriage.

Some, such as her best friend, 21-year-old Pruzmay Mandaza, are now planning on returning to school, although her husband forced her to step down as vice-chair of the association and stopped her from participating in the taekwondo training.

Inside the neatly decorated small house adorned with Maritsa’s medals and pictures, her parents prepare fruit juice and some cookies for the girls — their sacrifice to help their daughter’s efforts.

“I can only take 15 people per session because the only support I get is from my parents,” said Maritsa. “My father is a small-scale farmer, my mother is a full-time housewife but they sacrifice the little they have toward what I want to achieve,” she said. “He is my jogging partner,” she added, referring to her father.

Taekwondo is not very popular in soccer-mad Zimbabwe, but there are pockets of professional and backyard training schools.

Despite her limited resources, Maritsa is committed to her mission.

Early marriages could be increasing as COVID-19 keeps children away from school and deepens poverty, warn women's groups.

Even some of those attending Maritsa’s home sessions seem to have different priorities.

“We need to know how to keep our husbands happy, that’s what’s important,” Privilege Chimombe, a 17-year-old mother of two who had her first child at 13 and has been abandoned by her husband, said after a recent session.

“These are the perceptions we have to fight," responded Maritsa. "It’s tough, but it has to be done.”