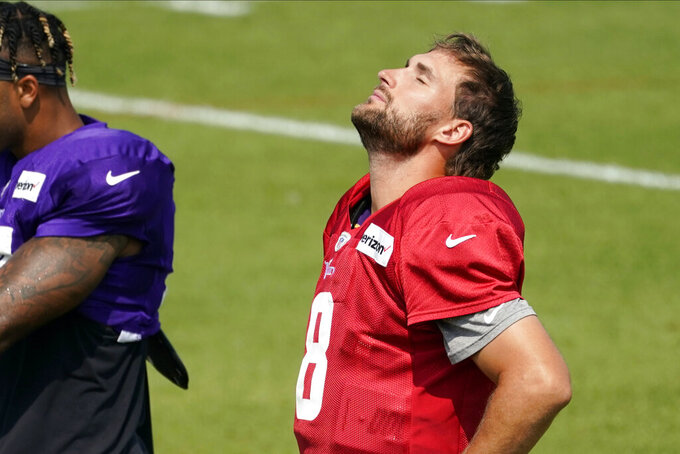 MINNEAPOLIS (AP) — The defense has largely fueled Minnesota's success since Mike Zimmer was hired as head coach, a balanced, disciplined and intelligent unit that has annually ranked among the NFL's best.

This virus-altered season will serve as a stiff test.

Before the COVID-19 outbreak forced teams to conduct spring meetings and practices virtually, the salary cap delivered the first blow to the Vikings. Defensive tackle Linval Joseph and cornerback Xavier Rhodes were released to make room before free agency. Three other starters eventually signed elsewhere. The younger candidates for filling the turned-over positions lost valuable on-field development time to the global pandemic. Michael Pierce, the most prominent acquisition and expected replacement for Joseph, opted out for 2020 due to asthma-related health concerns.

For the first time in Zimmer's seven years with the Vikings, the offense has the edge in stability over the defense, with quarterback Kirk Cousins with running back Dalvin Cook as the centerpiece. The Vikings have the league's sixth-highest percentage of combined snaps played by returning players on offense, according to Sportradar research. They rank 19th on defense.

As the rare NFL head coach with both a background on defense and a duty as the primary play caller on game day, though, Zimmer has a palpable sense of pride in the group he has largely shaped. It's a unit that's still led, despite the wave of departures, by end Danielle Hunter, linebackers Anthony Barr and Eric Kendricks, and safety Harrison Smith, a quartet sporting a combined 12 Pro Bowl selections. The other safety, Anthony Harris, led the league with six interceptions last season.

“We have a lot of guys who have played for a while, together, and have had a lot of success and have been through ups and downs, and then we have a lot of guys who are new, kind of have clean slates, but a ton of talent. Smart guys, smart coaches, a lot of people who want to win and who want to be great football players and a great defense,” Smith said. “So I think it’s good to have that mix. It’s good to have some new faces every now and then.”

The Vikings have ranked in the top 14 in both yards and points allowed in each of their six years under Zimmer, including eight out of 12 times in the top 10. After leading the NFL in both categories in 2017, they’ve finished fourth and 14th in yards, ninth and fifth in points.

“If you’re not adapting every single day or every single year, you’re not going to last very long, because that’s what everybody does. Same as life. I feel fortunate that I’ve never been fired. I take more pride in that than anything else,” said Zimmer, who is 64 and armed with a contract extension through the 2023 season. “Not very many coaches can say that.”

The Vikings unhesitatingly supported Pierce in his decision, but his exit left a hole at the nose tackle position held by Joseph for the last six years. Shamar Stephen lid over, leaving Jaleel Johnson as the leading candidate at the other spot, known as the 3-technique.

An even bigger issue caused by the coronavirus, however, will undoubtedly be the loss of the roaring crowd for at least the first two home games against Green Bay (Sept. 13) and Tennessee (Sept. 27). Even if fans are allowed in later in the fall, capacities would certainly be significantly reduced. The Vikings are 23-9 in the regular season since U.S. Bank Stadium opened in 2016, tied for the best home mark in the NFC with Philadelphia and New Orleans. The noise level under the translucent roof has been helpful for rattling the opposing offense.

“The concentration is so much harder when you’ve got 66,000 crazy Vikings fans that are doing the Skol chant,” Zimmer said. "It makes it much more difficult.”

After 10 seasons with the team, six as a starter, defensive end Everson Griffen departed for Dallas. Ifaedi Odenigbo, one of last year's breakout players, has taken over the right side, opposite Hunter. Andre Patterson, the new co-defensive coordinator with Adam Zimmer, plans to keep Hunter at left end. Hunter, 25, who has missed more than a week of practices with an unspecified injury, is the youngest player in NFL history with 50 career sacks.

“I don’t want to take a guy from where he’s comfortable and making a name for himself to be one of the best in the business at what he does. To me, that’s not very smart as a coach,” Patterson said.

Mike Hughes and Holton Hill are the top two outside cornerbacks, with Xavier Rhodes and Trae Waynes moving on. Jeff Gladney, one of the team's two first-round draft picks, will be groomed to eventually play one of those spots. The most impressive rookie of training camp has been Cameron Dantzler, a lanky third-round draft pick from Mississippi State nicknamed “The Needle” for a hard-hitting ability belying his lean frame. Dantzler has worked both outside and inside.

Cousins will miss Stefon Diggs, who was traded to Buffalo in the biggest move of the offseason to save cap space — and erase the tension surrounding his dissatisfaction with his role in the offense.

First-round draft pick Justin Jefferson from national champion LSU will factor heavily into the plan to complement Adam Thielen in an otherwise inexperienced wide receiver group. Bisi Johnson, who has continually impressed the coaches with his mastery of the system since being drafted in the seventh round last year, has emerged as the No. 2 option.