10 boys and teens among the dead in Israel festival stampede 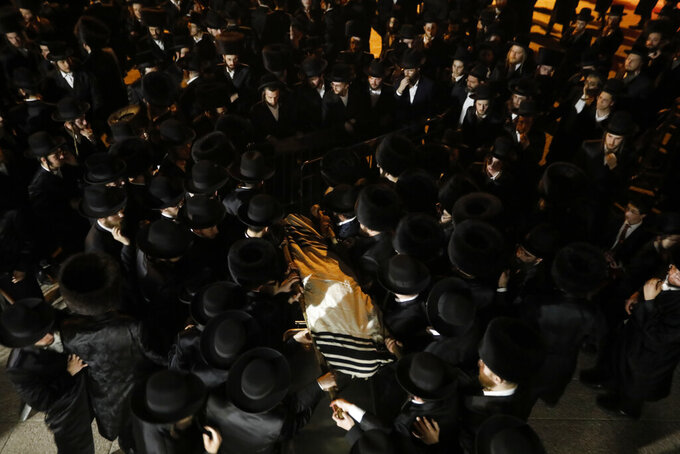 Mourners carry the body of Menachem Knoblowitz, 21, from the United States, who died during Lag BaOmer celebrations at Mt. Meron in northern Israel, at his funeral in Jerusalem on Saturday, May 1 2021. A stampede at a religious festival attended by tens of thousands of ultra-Orthodox Jews in northern Israel killed dozens of people and injured about 150 early Friday, medical officials said. It was one of the country's deadliest civilian disasters. (AP Photo/Ariel Schalit)

JERUSALEM (AP) — At least 10 children and teens younger than 18 were among 45 ultra-Orthodox Jews killed in a stampede at a religious festival in northern Israel, according to a partial list of names published Saturday as the identification of victims in Israel's deadliest civilian disaster continued.

Four Americans, a Canadian and a man from Argentina were also among those killed. Two families each lost two children. The youngest victim was nine years old.

Meanwhile, calls were growing louder Saturday for establishing an official commission of inquiry, in part to gauge the responsibility of politicians and senior decision-makers for allowing the mass gathering to take place, despite repeated warnings over the years about safety lapses. In an initial response, the country's Cabinet minister who oversees the nation's police force defended the police's handling of the event.

The stampede early Friday had cut short the annual festival of Lag BaOmer on Israel’s Mount Meron. The festival had drawn some 100,000 people in the largest gathering so far this year as Israel’s successful vaccination campaign allowed the country to emerge from coronavirus restrictions.

As large numbers of people began to leave one of the events at the festival, they thronged a narrow tunnel-like passage that sloped downward and ended with a series of steps. The floor had become slippery with spilled water and juice, according to witnesses. As some in the crowd slipped, those behind them fell on top of those on the ground.

Veteran paramedic Yossi Halabi told Israel TV's Channel 12 on Saturday that he “encountered a wall of bodies” after he was first alerted to the disaster from his nearby post. He said it took him and fellow rescuers about 40 minutes to extract the dead and wounded from the chaos.

He said that it was “one of the worst if not the worst incident” he had seen in 30 years on the job.

Prime Minister Benjamin Netanyahu has declared Sunday to be a national day of mourning. On Saturday night, a vigil was held in Tel Aviv, where people lit memorial candles and the municipality lit up City Hall with the Israeli flag.

Israeli media said 32 of the 45 victims were identified before the start of the Jewish Sabbath at sundown Friday. Of those, 22 were laid to rest before the Sabbath. The identification of the remaining victims and burials resumed after sundown, as did some of the funerals. Jewish law calls for swift burial of the dead.

Lag BaOmer is very popular with Israel’s ultra-Orthodox community to honor Rabbi Shimon Bar Yochai, a 2nd-century sage and mystic who is believed to be buried there. The crowds light bonfires, dance and have large festive meals as part of the celebrations. Across the country, even in secular areas, smaller groups gather in parks and forests for barbecues and bonfires.

Experts have long warned that the Mount Meron celebrations were ripe for disaster due to the crowded conditions, large fires and hot weather. In a 2008 report, the state comptroller, a watchdog government office, warned conditions at the site, including escape routes, “endanger the public.”

The Justice Ministry said it was launching a probe into possible criminal misconduct by police officers. Witnesses complained that police barricades had prevented people from exiting properly.

However, there were growing demands Saturday, including from retired police commanders, for an official commission of inquiry that could also review decisions by the political leadership.

In a post on Facebook, Public Security Minister Amir Ohana, who is responsible for the police and also a close confidant of Netanyahu, praised police conduct. He said he was prepared to “take responsibility” and answer all questions. “I am responsible — but responsibility does not mean guilt,” he wrote.

According to Health Ministry guidelines, public gatherings continue to be limited to no more than 500 people. But Israeli media said that Prime Minister Benjamin Netanyahu assured ultra-Orthodox leaders that the celebrations would take place, despite objections from public health officials. Netanyahu’s office did not respond to requests for comment.

Netanyahu has long relied on powerful ultra-Orthodox parties as allies. He will need their support if he wants to keep faint hopes alive of staying in power following inconclusive elections in March, the fourth in just two years. The coming week is expected to be decisive for his so far unsuccessful efforts to form a coalition government with right-wing and ultra-Orthodox parties.