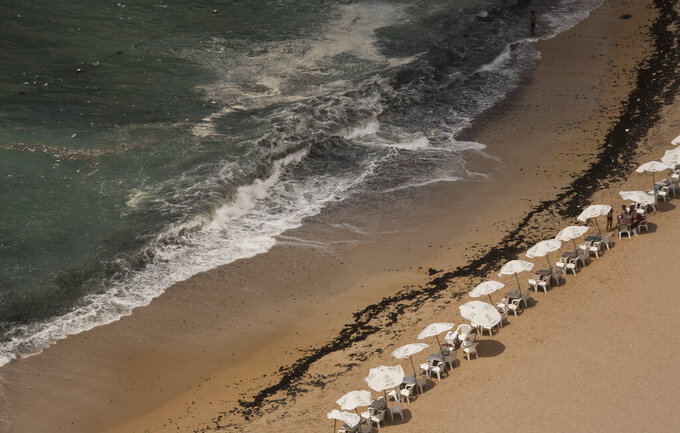 In this Aug. 8, 2019, photo, garbage creeps towards the shore at Stanley Beach in Alexandria, Egypt. Authorities say that 11 people drowned off the coast of northern Egypt on Friday, July 10, 2020 at a beach known for its rocky jetty and fast-moving waters. (AP Photo/Maya Alleruzzo, file)

CAIRO (AP) — Eleven people drowned off the coast of northern Egypt, local authorities said Friday, at a beach known for its rocky jetty and fast-moving waters.

The tragedy unfolded at a beach in the Mediterranean city of Alexandria, when a young boy ran into the sea and began having difficulties, said the city's central tourism administration.

When a man from the group jumped in to rescue him, he became caught in the waters, too. Nine other people then entered the water to help, and they all died, said Maj. Gen. Jamal Rashad. It was not immediately clear if they were related.

The waters off Alexandria are popular in the summer, but beaches are currently closed and lifeguards off duty due to the coronavirus pandemic. The group went to the shore at dawn to avoid being caught by police, who try to disperse crowds and enforce antivirus restrictions at beaches in the area, authorities said.

Palm Beach has long been known for its deadly waters, local media reported. Every year it sees a rash of drownings due to its strong currents, foamy waters and rocky shore. Members of parliament have repeatedly demanded that the beach be closed to the public.

As summer temperatures in Egypt reach 100 degrees Fahrenheit, the accident raised concerns over water safety as people seek relief from the heat despite pandemic-related restrictions.