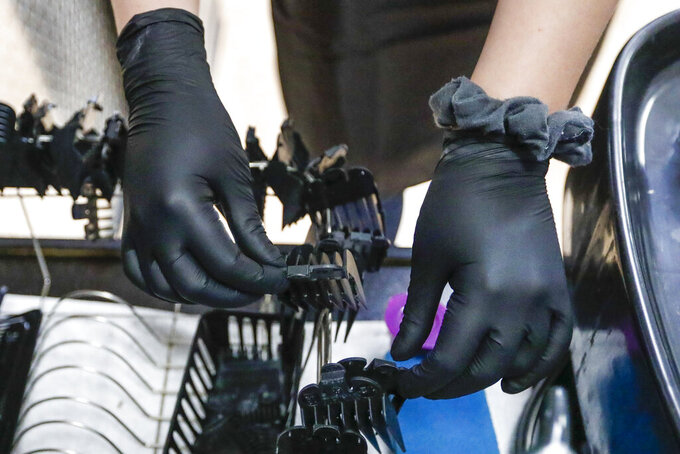 Stylist Kayla Addink arranges assorted clipper attachments in her workspace Thursday, June 4, 2020, as she prepares for her first day back on the job at the West View Barber Shop when most of southwest Pennsylvania loosens COVID-19 restrictions on Friday in West View, Pa. (AP Photo/Keith Srakocic)

HARRISBURG, Pa. (AP) — Gov. Tom Wolf will allow 12 more counties that are home to 1.3 million people to enter the least-restrictive phase of his pandemic reopening plan, even as he warned Friday of an outbreak in northwestern Pennsylvania.

Sixteen more counties entered the “green” phase Friday, joining 18 others. That means that gyms, barbers and hair salons can reopen, as can indoor dining at restaurants and bars. Overnight camps and organized youth sports can begin or resume, and gatherings of up to 250 people are allowed, although large demonstrations over the past week around Pennsylvania protesting police brutality routinely exceeded 250 people.

Wolf, a Democrat, drew quick criticism over one county that is remaining in the yellow phase.

“This is beyond ludicrous, it is a direct smack in the face to all Erie County residents,” Sen. Dan Laughlin, R-Erie, said in a statement.

Wolf said that, while the total case counts have declined recently across Pennsylvania, Erie County is seeing a rise in cases and an increase in the rate of positive tests.

“This is a concern, in fact it is actually alarming to our epidemiologists who believe an outbreak is occurring as we speak in Erie County,” Wolf said at a news conference.

Meanwhile, nearly 6 million people in Philadelphia and nine other counties in hard-hit southeastern Pennsylvania became the last in the state Friday to shed the tightest restrictions, including a stay-at-home order.

Gatherings in the yellow phase are still limited to 25 people, and Wolf on Friday acknowledged that his marching in a demonstration with hundreds of people in a yellow phase county — Dauphin County, home to the state Capitol — was "inconsistent" with his orders to the general public.

He said he was trying to show support for a cause that he thinks is “very, very important.”

Even in the green phase, businesses are required to maintain social distancing measures, including requiring customers and employees to wear masks, and to limit capacity.

Wolf administration officials haven’t said when those requirements would lift, but Health Secretary Dr. Rachel Levine suggested that they may remain in place until there is a safe and effective vaccine that is widely available. On Friday, she said those restrictions aren't intended to last forever, but vigilance will be necessary in the fall during flu season for an increase in coronavirus cases.

The pandemic in Pennsylvania has infected more than 74,000 people, including 443 new cases reported by the state Department of Health on Friday. It has killed nearly 5,900, including 69 more deaths reported Friday by the department.

For most people, the virus causes mild or moderate symptoms. For some, especially older adults and people with existing health problems, it can cause more severe illness and lead to death.

In the meantime, roughly 2.4 million people, including the self-employed, have applied for unemployment benefits since mid-March, when the effects of Wolf's coronavirus-related emergency shutdowns began to take effect.