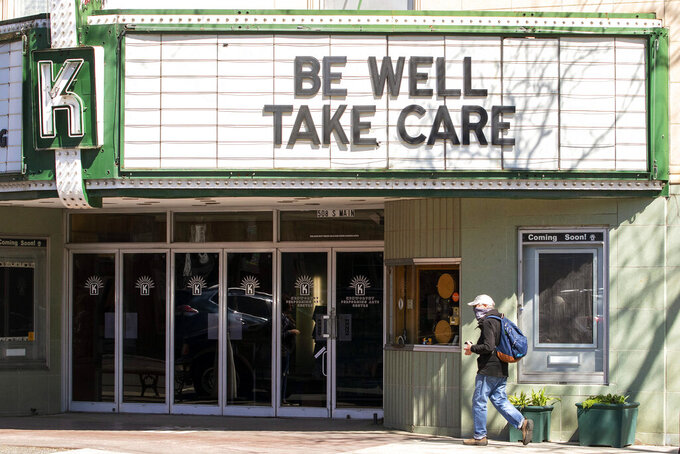 FILE - This April 13, 2020, file photo shows a pedestrian wearing a mask passing under the marquee at the Kenworthy Performing Arts Centre during the coronavirus outbreak in Moscow, Idaho. Idaho nursing homes have been hit hard by the coronavirus pandemic, with at least 150 cases reported at 16 different long-term care facilities in the state. (Geoff Crimmins/Moscow-Pullman Daily News via AP, File)

BOISE, Idaho (AP) — Idaho nursing homes have been hit hard by the coronavirus pandemic, with at least 150 cases reported at 16 different long-term care facilities in the state. So far, at least 26 people at such facilities have died from COVID-19.

However, state officials have declined to release the names of the facilities that have had outbreaks.

“We would not publish an individual person’s address for the public to know they were positive for COVID-19; publishing facility names would be the same thing — disclosing a person’s residence,” Forbing-Orr said. “All the residents and their families in each of the facilities with positive cases have been notified.”

The situation makes it difficult to gauge if the facilities had appropriate access to testing for staffers and residents or whether they have had previous infection control problems.

Long-term care facilities across the country have been ravaged by the pandemic. The virus causes mild or moderate symptoms for most people, but for some — especially older adults and people with existing health problems — it can cause more severe illness or death.

One major outbreak has been confirmed at the Life Care Center of Lewiston, in north-central Idaho. At least 19 people have been sickened by the virus and at least one has died from COVID-19, senior executive director Tiffany Goin said on April 17.

“Due to limitations in testing supplies locally and nationally, we were unable to test all patients and staff who became symptomatic,” she said at the time.

This week the Lewiston center referred all questions to Leigh Atherton, spokeswoman for Life Care Centers of America. Atherton wouldn’t release any updated numbers on confirmed or suspected COVID-19 cases, but she said all residents at the facility have now been tested. She also wouldn’t say if all staffers have been tested for the illness, but she noted they are all being screened for fevers or other symptoms when they come to work and when they leave.

Tara Macke, a spokeswoman for Public Health-North Central Idaho District, refused to say how many facilities in her district have experienced an outbreak so far.

“There have been cases of COVID-19 in multiple facilities, but determination of how many facilities have experienced an outbreak during this pandemic will be determined after this active/dynamic situation has resolved,” she wrote in an email.

The Lewiston center is in Nez Perce County, which has had at least 13 coronavirus-related deaths so far, according to a tally by Johns Hopkins University. The county comes in second to Ada County, which has more than 10 times the number of residents and 14 deaths.

In the Ada County region, there were four long-term care facilities with 48 suspected and confirmed COVID-19 cases among staff and residents, Central District Health spokeswoman Christine Myron said last week. The district said more than half were at Avamere, which had 28 cases as of April 23. Avamere officials did not immediately respond to a request for comment on Monday.

Myron said the district is still recommending that only people with symptoms be tested. The state hasn’t ordered testing at any nursing home facility either, said Forbing-Orr, but she said state and local health officials are working closely with long-term care facilities to make sure they have access to testing if they need it.

Of the 82 Idaho nursing home facilities that have participated in Medicare or Medicaid since the beginning of 2017, 65 have been cited by government inspectors for violating infection control standards, according to a data analysis by Kaiser Health News distributed by The Associated Press. The violations range from issues that don’t directly relate to communicable diseases — like residents who get infections from catheters — to problems that can lead to spreading illnesses like influenza or coronavirus.

Statewide, nearly 1,900 Idaho residents had confirmed cases of COVID-19 on Monday , and at least 56 residents have died.