$1B in revenue expected from New Mexico's state trust lands 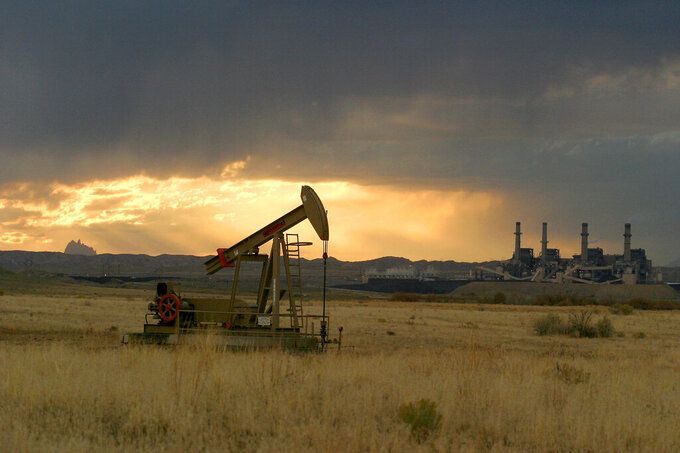 FILE - In this Nov. 8, 2004, file photo, the sun sets behind Shiprock Mountain, a pumpjack and the San Juan Generating Station near Farmington, N.M. New Mexico is on track to have another banner year as a result of oil and gas drilling and other activities on state trust lands, officials with the State Land Office said Tuesday Aug. 18, 2020. (Dave Watson/The Daily Times via AP, File)

ALBUQUERQUE, N.M. (AP) — New Mexico is on track to have another banner year as a result of oil and gas drilling and other activities on state trust lands, officials with the State Land Office said Tuesday.

The land management agency expects revenue for the recent fiscal year to top $1 billion. Back-to-back billion-dollar years are breaking revenue records despite the bottoming out of the oil industry earlier this year, the call for some wells to be temporarily shut down and continued economic uncertainty resulting from the coronavirus pandemic.

But officials warned that based on unpredictable prices and a decrease in production, the 2021 fiscal year is expected to have a different outcome and the agency plans to prioritize renewable energy projects, economic development opportunities and outdoor recreation partnerships as a way to diversify revenues from state trust lands.

Oil and gas development accounts for the agency's largest revenue source. While the agency saw a 5% decrease in oil and gas royalty payments during the recent fiscal year, it reported more than $885,000 — or a 118% increase — in revenue from wind energy projects and lease payments.

Livestock grazing leases, permits and other fees also are part of the mix, with the money benefiting public schools and other institutions.

State Land Commissioner Stephanie Garcia Richard said navigating a pandemic wasn’t in the plan but that her employees rose to the occasion.

“It’s important for the Land Office to be seen as a consistent source of income for the institutions that we support," she said in a statement. "We are working hard to diversify our revenue sources to assure that if we see future decreases in the price of oil like we did this year, other activities are thriving so that the beneficiaries don’t take a hit.”

The State Land Office earlier this year adopted a new rule to allow for oil producers to temporarily shut-in wells until prices stabilize. Companies that seek such permission are asked to pay an annual shut-in royalty payment in lieu of royalties on what is produced.

Previously, there was a penalty for shutting in a well, resulting in the potential to lose leases.

As of Tuesday, oil producers had submitted 226 shut-in notices. Of those, the agency has received shut-in royalty payments on 153 wells and have applied and approved 30 of the payments.

Overall, agency records show royalty distributions have decreased by an average of about 28% since April.

The industry also is facing pressure to reduce emissions as New Mexico energy and environment officials are in the process of adopting new rules aimed at curbing methane and other pollutants from the industry. The public has until Thursday to comment on the rules proposed by the state Environment Department.