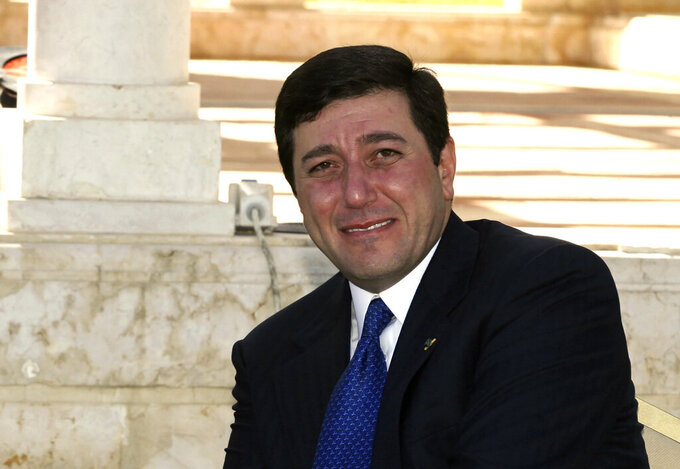 FILE - In this May 25, 2008 file photo, Dr. Bassem Awadallah, then Director of the Office of King Abdullah II of Jordan, attends a celebration to mark Independence Day, in Amman, Jordan. The prosecutor of Jordan's state security court on Sunday, June 13, 2021 filed sedition and incitement charges against Awadallah and Sharif Hassan bin Zaid, both confidants of King Abdullah II’s half-brother Hamzah, marking the latest step in a rare, intrigue-filled palace drama that has rattled the Western-backed kingdom. (AP Photo/Nader Daoud, File)

The affair erupted into the open in early April when Hamzah was placed under house arrest and two senior associates — Bassem Awadallah and Sharif Hassan bin Zaid — were arrested, amid allegations that they tried to destabilize Jordan with foreign help.

Bin Zaid is a member of the royal family, and Awadallah, a former head of the royal court, reportedly has close ties to Saudi Arabia’s powerful crown prince.

The state news agency Petra said Sunday that the trial of the two will begin next week before the state security court.

Hamzah’s fate remains unclear, including whether his movement and ability to communicate remain restricted. Several days after Hamzah's house arrest, Abdullah said he had resolved the matter with his half-brother through mediation within the royal family and that Hamzah was in his own home under the king’s protection.

At the time of his initial house arrest, Hamzah alleged that he was being silenced for exposing what he said was incompetence and corruption of the “ruling system.” The royal has established close ties with some of Jordan’s powerful tribes, serving as a conduit for growing anger and resentment as Jordan struggles with a widening economic crisis exacerbated by the coronavirus pandemic.

Sunday's indictment, parts of which were published by state-linked media, alleged that Hamzah, was motivated “by his personal ambition" to rule. Hamzah was stripped of the title of crown prince by Abdullah in 2004, who gave the position to his oldest son.

The indictment also alleged that Awadallah criticized the king's handling of the Palestinian cause, with the aim of weakening Jordan's role as guardian of a major Muslim shrine in contested Jerusalem. The role of guardian is a pillar of the Hashemite dynasty's claim to political legitimacy.

Abdullah has ruled Jordan since the 1999 death of his father, King Hussein, who ruled the country for close to a half-century. Abdullah has cultivated close relations with U.S. and other Western leaders over the years, and Jordan was a key ally in the war against the Islamic State group. The country borders Israel, the occupied West Bank, Syria, Iraq and Saudi Arabia.