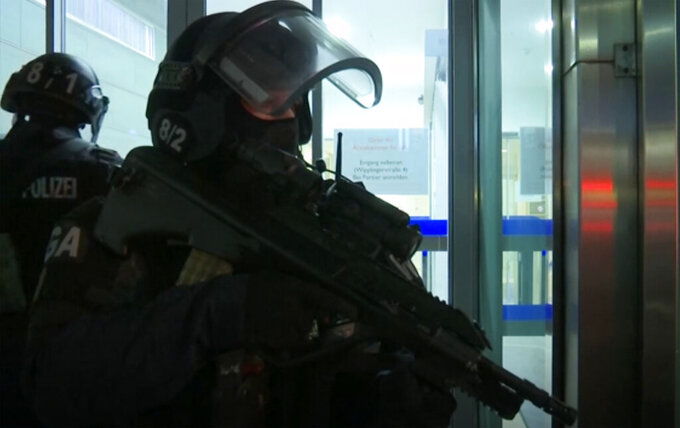 In this image made from video, police at the scene after gunshots were heard, in Vienna, Monday, Nov. 2, 2020. Austrian police say several people have been injured and officers are out in force following gunfire in the capital Vienna. Initial reports that a synagogue was the target of an attack couldn’t immediately be confirmed. Austrian news agency APA quoted the country’s Interior Ministry saying one attacker has been killed and another could be on the run. (AP Photo)

VIENNA (AP) — Gunmen opened fire on people enjoying a last night out at Vienna's cafes and restaurants before a coronavirus lockdown Monday in what authorities said was a terrorist attack that left at least two dead — including one of the assailants — and 15 wounded.

“We are victims of a despicable terror attack in the federal capital that is still ongoing,” Austrian Chancellor Sebastian Kurz said hours after the gunfire erupted.

“One of the perpetrators was neutralized, but several perpetrators appear to still be on the loose,” he said. “They seem to also, as far as we know, be very well equipped, with automatic weapons. So they were very well prepared."

Police said that several shots were fired shortly after 8 p.m. (1900 GMT) on a lively street in the city center and that there were six shooting locations. Unverified footage posted on social media showed gunmen walking through the streets, apparently shooting at people at random, wounding several.

The motive was under investigation, but Kurz said the possibility that it was an anti-Semitic attack cannot be ruled out, given that the shooting began outside Vienna's main synagogue. The synagogue was closed at the time.

Interior Minister Karl Nehammer told public broadcaster ORF that the army had been asked to guard key locations in the city to allow police to pursue the gunmen.

Kurz praised police for killing one of the attackers and vowed: “We will not never allow ourselves to be intimidated by terrorism and will fight these attacks with all means."

Oskar Deutsch, the head of the Jewish community in Vienna, said it was not clear whether the main synagogue had been targeted.

Rabbi Schlomo Hofmeister said he saw at least one person shoot at people sitting outside at bars in the street below his window.

“They were shooting at least 100 rounds just outside our building,” Hofmeister said.

“All these bars have tables outside. This evening is the last evening before the lockdown,” he added. “As of midnight, all bars and restaurants will be closed in Austria for the next month, and a lot of people probably wanted to use that evening to be able to go out.”

French President Emmanuel Macron tweeted that the French “share the shock and grief of the Austrian people hit by an attack tonight.”

“After France, this is a friendly country that has been attacked. This is our Europe. ... We will not give in,” he wrote.

France has endured three attacks blamed on Muslim extremists in recent weeks: the wounding of two people outside satirical newspaper Charlie Hebdo’s old headquarters; the beheading of a schoolteacher who showed students caricatures of the Prophet Muhammad; and a deadly knife attack Thursday in a church in the Mediterranean city of Nice.

All of the attacks were strongly condemned at the time by Austria's chancellor.

Authorities in Vienna urged people to avoid all open spaces and public transportation. Police said trams and buses weren't stopping and urged social media users not to post videos of the police operation so as not to endanger officers.

Frank Jordans reported from Berlin. Kirsten Grieshaber and David Rising contributed to this report from Berlin.