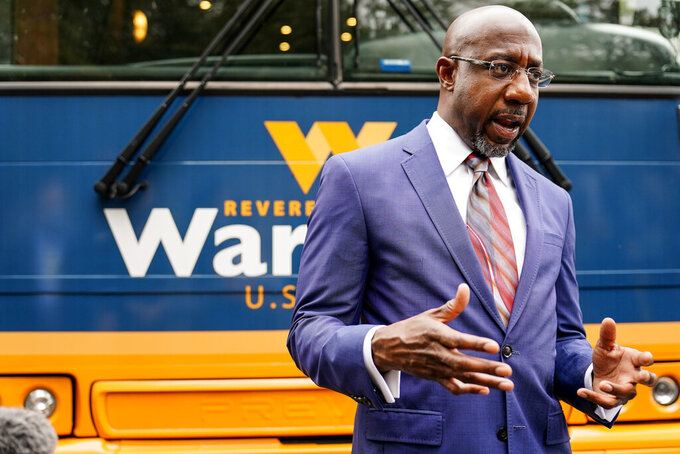 Democratic candidate for Senate Raphael G. Warnock speaks to a crowd during a "Get Out the Early Vote" event at the SluttyVegan ATL restaurant on Tuesday, Oct. 27, 2020, in Jonesboro, Ga. (AP Photo/Brynn Anderson)

ATLANTA (AP) — Both of Georgia’s Republican senators are on the 2020 ballot, but they’re running campaigns that seem poles apart.

Sen. David Perdue plays down his ties to President Donald Trump and instead touts his experience as a former CEO and cites job growth that occurred before the pandemic.

Meanwhile, his colleague, Sen. Kelly Loeffler, already calls herself America’s most conservative senator after just 10 months on the job. She praises Trump at every turn and allies herself with a candidate known for espousing baseless QAnon conspiracies.

Those wildly divergent strategies are being put to the test in the battleground state where, because of a sudden vacancy last year that led to Loeffler’s appointment, both seats are up for grabs, with control of the Senate potentially on the line.

With 20 candidates in the race for Loeffler’s seat and three in the race for Perdue’s, there’s also a chance both contests could stretch into January if runoffs are required.

Democrats are betting 2020 will be a comeback year, especially if moderate voters break from Trump. Donors from outside the state have poured huge sums into the races, and record numbers of voters cast ballots early.

“We’ve come close" in recent elections, said Michael Thurmond, the Democratic CEO of metro Atlanta’s DeKalb County who ran unsuccessfully for the Senate a decade ago. "The question is: Can you climb the last mile to get to the top of the mountain?”

Running for a second term, Perdue is trying to appeal to moderates with an economic message that recalls his tenures atop Reebok and Dollar General. Despite years serving as a vocal Trump defender on TV, Perdue hasn't highlighted their relationship in his campaign.

“I think the choice is very clear,” Perdue said in a recent debate, saying he wants to unite Americans to beat the coronavirus and “absolutely get our economy back.”

Libertarian Shane Hazel is also on the ballot. If he keeps either Perdue or Ossoff from winning more than 50% of the vote, the race goes to a Jan. 5 runoff.

Loeffler, a super-wealthy businesswoman appointed to replace retiring GOP Sen. Johnny Isakson, faces a different challenge. Among those trying to take her seat is Rep. Doug Collins, a four-term Republican congressman who was passed over for the appointment himself.

The crowded field virtually assures a January runoff, likely between leading Democrat Raphael Warnock and either Loeffler or Collins. By challenging Loeffler, Collins essentially forced a hyper-partisan fight in which both Loeffler and Collins have sought to win over Trump supporters.

“What this president has done is unprecedented during a pandemic when he’s trying to fight the swamp, the radical left, China and the fake news and now big tech,” Loeffler said during her debut debate.

With Loeffler and Collins focused on each other, Warnock has been left virtually unscathed. Warnock is the activist pastor of the Atlanta church where Martin Luther King Jr. preached and has won endorsements from nearly every top Democrat.

Brian Robinson, a Republican strategist, said the battle between Loeffler and Collins has allowed Warnock to “float above the fray. No one is attacking him, and his two top opponents are focusing all of their fire on each other.”

Both Ossoff and Warnock have seized on the coronavirus pandemic and their opponents’ ties to Trump as key lines of attack, noting that Republicans are trying to dismantle the Affordable Care Act amid a pandemic that has killed more than 7,800 Georgians.

“Our health care is on the line. It’s a matter of life and death," Ossoff said in a recent debate.

While Perdue has mostly aimed for the middle with his message, he received widespread attention for one particularly partisan jab.

Warming up the crowd at a recent Trump rally in Macon, Perdue repeatedly mispronounced the name of Sen. Kamala Harris, the Democratic vice presidential nominee, as members of the audience laughed.

Loeffler and Collins have traded barbs on a range of issues, but most frequently accuse the other of being phony conservatives. Loeffler has derided Collins as a “career politician” and accused him of being soft on crime based on his work as a criminal defense attorney. Collins has called Loeffler a “pretend farmer" and accused her of supporting pro-abortion groups and candidates before taking office, while touting his own experience in Congress.

Loeffler defended Greene, saying “she has stood for American values.”

But Warnock has pounced on the connection, saying in a statement that Loeffler is “trafficking in division and proudly standing alongside those that spout dangerous rhetoric.”

Ossoff’s campaign raised $32.8 million through mid-October, while Perdue raised $21.7 million. Warnock raised $22 million, compared to $6.3 million for Collins and $5.2 million for Loeffler, though Loeffler has been buoyed by $23 million in loans from her own personal wealth. Outside groups have also spent well over $100 million in the two races.

Trump has praised both Loeffler and Collins, giving neither his endorsement. In September, Trump encouraged their feud as a way to boost his own chances by driving Republican turnout.

“The only thing I know for sure, they’re all going to vote for me,” Trump said.