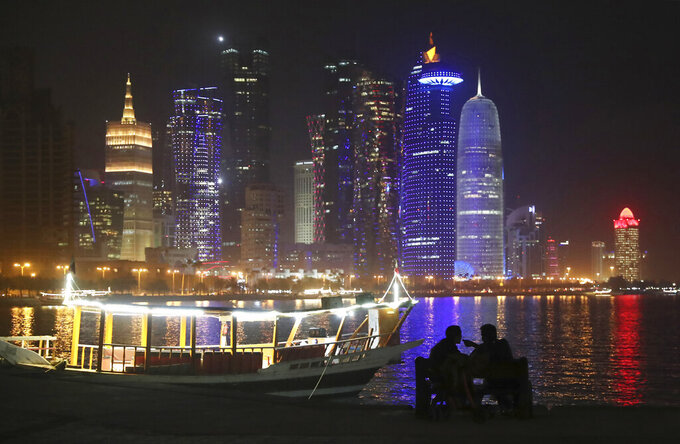 FILE - In this May 14, 2019 file photo, two people take in the sea breeze at the Corniche waterfront promenade in Doha, Qatar. The small, neighboring sheikhdoms of Bahrain and Qatar have the world’s highest per capita rates of coronavirus infections in the world. In the two Mideast countries, COVID-19 epidemics initially swept undetected through camps housing healthy and young foreign laborers. In Qatar, a new study found that nearly 60% of those testing positive showed no symptoms at all. In Bahrain, authorities put the number of asymptomatic spreaders of the virus even higher, at 68%. (AP Photo/Kamran Jebreili, File)

In Qatar, a new study found that nearly 60% of those testing positive showed little or no symptoms at all, calling into question the usefulness of mass temperature checks meant to stop the infected from mingling with others. In Bahrain, its government put the asymptomatic figure even higher, at 68%.

Bahrain and Qatar have been able to test large portions of their small populations, allowing the two countries to find infections that other countries, with more limited testing, have not. A recent study in the U.S., for example, found that about 10 cases are missed for every one that is confirmed.

Qatar has found 37.4 coronavirus cases per 100,000 people, the highest rate of confirmed cases in the world, according to figures from the University of Oxford. Bahrain, at 22.1 confirmed cases per 100,000, is second. Other countries with high confirmed rates per population include San Marino, Chile, the Vatican, Kuwait, Oman, Panama and Armenia. The U.S. is at No. 10.

These results reflect both the wider problems faced by Gulf Arab countries reliant on cheap foreign labor and their relative success in tracking their COVID-19 epidemics, given their oil wealth and authoritarian governments.

Aggressive testing boosted the number of confirmed cases as health officials in Bahrain and Qatar targeted vulnerable labor camps and neighborhoods, where migrant workers from Asia sleep, eat and live up to dozen people per room.

“This is why globally we failed to control, I think, the infection because simply the response has been focused on trying to find cases and isolate them and quarantine their contacts,” said Laith Abu-Raddad, a disease researcher at Weill Cornell Medicine – Qatar. “Now, if most people getting the infection are actually spreading the infection without even knowing it, this really does not actually work.”

The island kingdom of Bahrain and the energy-rich peninsular nation of Qatar have been locked in a yearslong political dispute that’s ended travel and trade between two countries only kilometers (miles) apart. Yet similarities abound in these U.S.-allied nations — Bahrain hosts the U.S. Navy's 5th Fleet while Qatar hosts the forward headquarters of the U.S. military's Central Command at its sprawling Al-Udeid Air Base.

Both rely heavily on foreign labor, whether white-collar workers in banks or blue-collar laborers scaling scaffolding on construction sites. Qatar in particular embarked on a massive construction boom ahead of hosting the 2022 FIFA World Cup.

The virus found a home in the cramped quarters that foreign laborers live in while trying to save money to send back home.

In Qatar, nearly 30% of those found infected were from India, while 18% were Nepalis and 14% were Bangladeshis, according to a study by Abu-Raddad and others.

Of the over 6,000 contact trace cases that Bahrain published, more than 2,600 involved Indian nationals, while 1,310 were Bahrainis and 1,260 were Bangladeshi. More than 400 came from Pakistan, with a similar number from Nepal.

Those figures in Bahrain and Qatar likely track across the wider Gulf Cooperation Council, the regional bloc that also includes Kuwait, Oman, Saudi Arabia and the United Arab Emirates, all of which rely on a vast foreign labor pool already sickened and trapped by the virus.

Though other GCC nations haven’t broken down coronavirus cases by nationalities, a recently published article in the Oman Medical Journal said that of the sultanate’s first 1,304 cases of the virus, 29% of patients were Indian, 20% were Bangladeshi and 10% were Pakistani.

Their living conditions likely make them more at risk of contracting the virus, as Bahrainis and Qataris usually live in single-family homes. The spread mirrors the contagion seen in boarding schools and other places where people live together in communal spaces.

Partly because of testing that uncovered mild cases of the disease and also in part because the people affected in the two countries have been relatively young, the number of deaths for every confirmed case appears to be low in both countries, just 0.15% in Qatar and 0.34% in Bahrain, according to researchers. That is far lower than what has been seen in parts of Europe and the U.S., though countries around the world count deaths very differently, so direct comparisons are difficult.

Both Abu-Raddad and Ghina Mumtaz, a disease researcher at the American University of Beirut, attribute that in part to the younger population of the laborers in both Bahrain and Qatar.

“If you look at the infection-fatality rate, you will realize that it’s not as scary as if you look only at the figure of the number of cases per capita,” Mumtaz said.

In response to questions from The Associated Press about their outbreaks, both Bahrain and Qatar attributed their high case numbers to having some of the world's best per capita testing rates. Qatar also compared itself to Singapore, a southeast Asia city-state that similarly had virus outbreaks among its migrant laborers.

Bahrain said its government's “pre-emptive testing strategy means that the vast majority of cases are identified prior to the development of symptoms.” Authorities there also moved 8,000 laborers to new accommodations, disinfected housing and implemented a rule requiring no more than five laborers per room, with about 3 meters (10 feet) of space for each one.

“Because of our low threshold for testing we have identified many more asymptomatic and mild cases of the virus than many other countries,” Qatar said. It now mandates a maximum of four laborers per shared room with at least 6 square meters (64 square feet) per occupant.

But finding the majority of the infected people asymptomatic raises questions about the effectiveness of checking only people seeking medical care for symptoms or checking people through the use of temperature-checks and thermal screening. The U.S. Centers for Disease Control and Prevention put the number of asymptomatic cases at 40% in America.

Of the Bahrain contract trace cases, over 2,000 came “as part of a campaign to obtain random samples from the community,” the database showed. More than 1,300 were foreign workers tested while the area they lived in faced mandatory quarantine orders.

The high number of asymptomatic individuals in both countries means that once the virus reaches a new population, it greatly raises the risk of people unknowingly spreading it while feeling fine.

“You are talking only about the spark to a fire,” Abu-Raddad said.