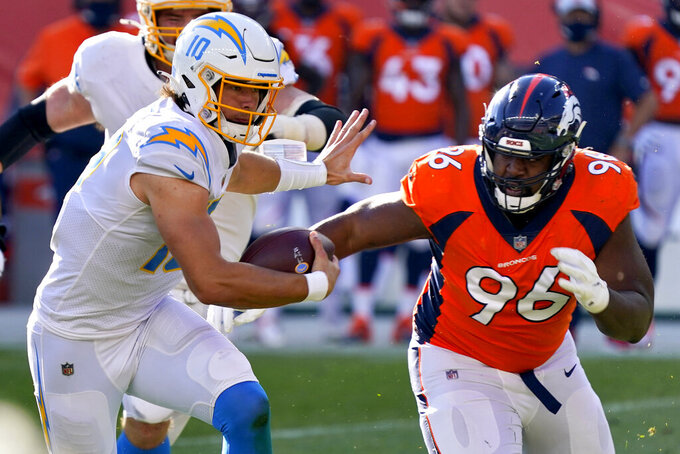 Paulo tested positive for the novel coronavirus and Harris self-reported after coming into close contact with an individual who has the virus. Harris needs five consecutive days of negative tests in order to return to the team, putting his status for this weekend’s game at Atlanta in jeopardy.

If he doesn’t play Sunday, the Broncos would be able to add a player to the active roster for the game.

One of the Broncos’ best defenders, Harris is the third player placed on the COVID-19/reserve list since Friday, when starting right guard Graham Glasgow announced he was infected with the virus.

Players and coaches reported to team headquarters Wednesday morning for their daily coronavirus tests and then went home to participate in virtual meetings. They were supposed to return in the afternoon for practice, but coach Vic Fangio canceled the on-field work after learning of Paulo's positive test and consulting with the league office.

The Broncos signed wide receiver Kendall Hinton, who was with the team in training camp, to take Paulo’s place on their practice squad.

Earlier Wednesday, Fangio said he was confident his team is safe and feels the Broncos are insulated from a major coronavirus outbreak despite another player testing positive for COVID-19.

“There’s always concern, but the thing I really feel good about is that none of the positive tests that we’ve had have originated from this building,” Fangio said during a conference call with Denver media Wednesday morning.

“It’s all happened in the guys' or the coaches’ daily lives outside the building where they get it," Fangio said. “So, I actually feel better when everybody’s here than I do when they’re not here.”

Fangio canceled on-field work after Paulo was added to the COVID-19/reserve list 24 hours after general manager John Elway and team president Joe Ellis tested positive for the novel coronavirus that has killed almost a quarter-million Americans.

“It was in consultation between us and the league and we just felt like it was the best thing to do in light of the number of (positive) tests that we’ve had recently,” Fangio said.

Fangio lauded the organization’s implementation of enhanced COVID-19 safety protocols, saying, “We’ve done a good job of keeping this building clean. Our medical people have done well, the people in charge of the facilities have gone overboard in making this place safe and I feel really confident in saying that all the positive tests that we’ve had originated from outside these walls.”

What Fangio is saying is that he doesn’t believe the Broncos coaches and players are spreading the infection around to other members of the team even though offensive line coach Mike Munchak and right guard Graham Glasgow went under COVID-19 protocols last week and Paulo brings the number of quarantined individuals from the offensive line room to three.

Fangio said he anticipates Munchak returning to work Thursday when the Broncos (3-4) plan to return to practice to resume preparations for their game Sunday against the Falcons (2-6). Their position and team meetings will remain virtual.

The new case means the Broncos now have three players, three assistant coaches, two executives and several other staffers at team headquarters who have had to quarantine in recent weeks because of novel coronavirus infections or exposure despite daily COVID-19 testing and other safety measures.

Fangio said the infected players and coaches are all attending virtual meetings and getting their work in from home while under quarantine.

Fangio gave his team both Monday and Tuesday off following its 31-30 come-from-behind win over the Los Angeles Chargers on Sunday. Other than players going into the building for rehab, the players haven't been together since Sunday.

In addition to Munchak, running backs coach Curtis Modkins and defensive coordinator Ed Donatell have been under the league’s COVID-19 protocols, meaning either they were infected or had to quarantine after being in close contact with an infected individual.

The Broncos have been under the NFL’s enhanced COVID-19 safety protocols since Modkins’ infection was diagnosed in mid-October. He returned to work last week.