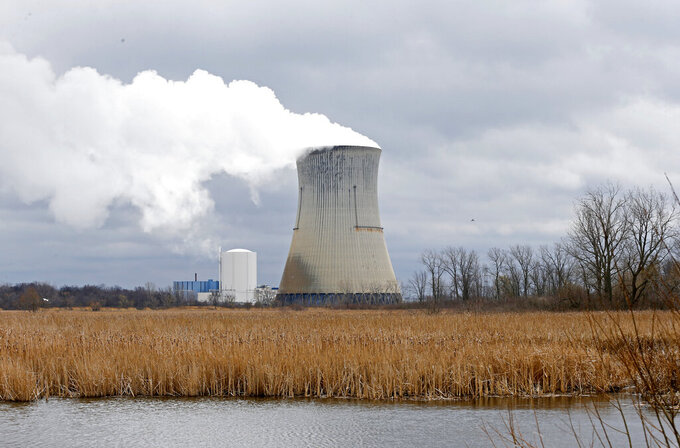 Former Republican House Speaker Larry Householder and four others were charged with racketeering for their roles in the alleged scheme, under a law federal prosecutors typically use to charge gang members.

The five are accused of shepherding $60 million in energy company money for personal and political use in exchange for passing a legislative bailout of two aging nuclear plants and then derailing an attempt to place a rejection of the bailout on the ballot. The government refers to the operation in court documents as “the Enterprise.”

The government says the energy company money was funneled through Generation Now, a group created to promote “social welfare” under a provision of federal tax law that shields its funding source or spending. The government says part of the scheme involved bribing or otherwise discouraging signature gatherers from doing their job. Generation Now is charged as a corporation in the case.

An 82-page criminal complaint makes clear the energy company is FirstEnergy and its affiliates. FirstEnergy’s CEO has said he and the company did nothing wrong.

Juan Cespedes, 41, a lobbyist described by investigators as a “key middleman," and Jeffrey Longstreth, 44, a longtime Householder political adviser, pleaded guilty Thursday before federal Judge Timothy Black in hearings held by video conference because of the coronavirus pandemic.

Cespedes and Longstreth face up to 20 years in prison but are likely to receive far shorter sentences. Black didn't set sentencing dates.

FirstEnergy Solutions, a wholly owned subsidiary of FirstEnergy involved in nuclear generation, hired Cespedes in 2018 to pursue the bailout that became a law known as House Bill 6, according to a federal criminal complaint filed in July.

Cespedes “served as a key middleman, participating in strategy meetings and communicating with Enterprise members and associates regarding strategic decisions,” the government said in its July filing.

Longstreth was a signer on five bank accounts that received Generation Now money, according to the government. He's also accused of using at least $2 million of Generation Now money for personal benefit including $1 million to his brokerage account and hundreds of thousands of dollars on mortgage, car and credit card payments.

Longstreth knew Generation Now “would be used to receive bribe money to further Householder’s bid for Speaker of the House," DeVillers' office said.

Cespedes pleaded guilty after reviewing the government's evidence and realizing “he aided in the Householder conspiracy,” Mark Collins, an attorney for Cespedes, said in a statement. Collins noted the conspiracy was underway long before Cespedes became involved.

Longstreth also agreed to take responsibility for his mistakes after reviewing the government's evidence, his attorney, Robert Krapenc, told The Associated Press.

“Sometimes you’re blinded by what you’re trying to accomplish and later somebody else looks at it, and you look at it through a different set of eyes, and you say, ‘Oh wow, I didn’t intend to do it like that,’” Krapenc said.

Householder, 61, was removed from his leadership post in a unanimous vote following his arrest earlier this year. He pleaded not guilty last month and maintains his innocence. Charges are also still pending against Matt Borges, 48, a former Ohio Republican Party chairman, and Neil Clark, 67, a longtime Statehouse lobbyist.

An attorney for Borges has previously called the charges against him “wrong and unfortunate.” An attorney for Clark said he did not “see any culpability” in the case.

In a recorded conversation in September 2019, Borges described the relationship between Householder and the energy company as “this unholy alliance,” according to the July 21 complaint that lays out the details of the alleged scheme.

As recently as Wednesday, Republican Gov. Mike DeWine called on lawmakers to repeal the bailout during the Legislature's lame duck session following next month's election.

On Tuesday, two Ohio cities sued to block the bailout law from taking effect in January.