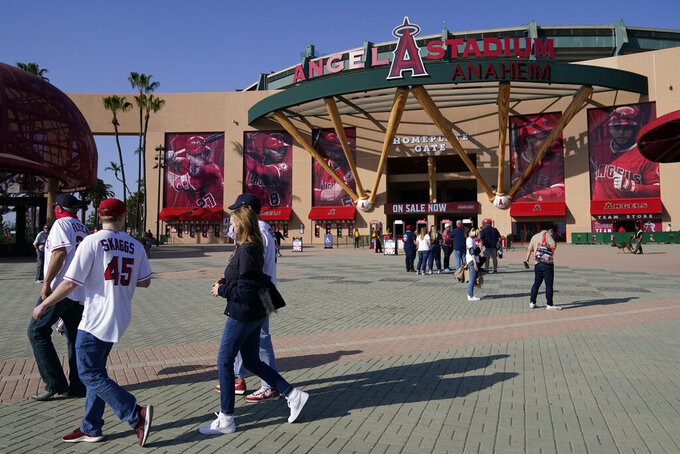 Fans walk outside Angel Stadium when a baseball game between the Minnesota Twins and the Los Angeles Angels was postponed Saturday, April 17, 2021, in Anaheim, Calif. MLB said the game was postponed to allow for continued COVID-19 testing and contact tracing involving members of the Twins organization. (AP Photo/Ashley Landis)

ANAHEIM, Calif. (AP) — The Twins' games against the Los Angeles Angels on Saturday night and Sunday have been postponed due to Minnesota's COVID-19 problems, including at least four positive tests in the past week.

Kyle Garlick, another unnamed Twins player and a team staff member tested positive in the two days before the postponements, manager Rocco Baldelli said Saturday. Shortstop Andrelton Simmons already hadn’t made the trip to Anaheim after testing positive early in the week, and he hadn’t been around the team since Tuesday.

“There’s not one person in our group who’s not frustrated,” Baldelli said. “Does everyone have that general frustration just having to deal with this in a grander sense? Absolutely. And then there are probably people who are frustrated about particular aspects of that.”

Saturday’s game was “postponed to allow for continued testing and contact tracing involving members of the Twins organization,” the league said in a statement.

The Twins are undergoing more testing this weekend in Anaheim, and they're uncertain when they'll be allowed to play again. They haven't had any more positive tests from another round Saturday, but Baldelli knows that could be false hope.

“It’s a difficult time, and we all know the timelines on these things,” Baldelli said. “If someone had been exposed, (the results) are not necessarily immediate. We’re going to return to the hotel and we’re going to await further instructions.”

Garlick played when Minnesota lost 10-3 to the Angels on Friday night. Minnesota's next scheduled game is in Oakland on Monday night.

Some Twins personnel isolated themselves at the team hotel Friday, according to Baldelli, who said he had a false positive himself Thursday morning.

Some of the infected Twins had “very minor symptoms ... just mild fatigue, headache, scratchy throat, all that,” Baldelli said.

The Twins made an organization-wide push for vaccination when they returned from spring training in Florida nearly three weeks ago. That push didn't include Simmons, who refused to be vaccinated.

Baldelli said the team was “close to where we wanted to be, but not close enough” in regard to getting most of its employees vaccinated. He believes that about 80% of the team has received two doses of the vaccine, but many employees aren't outside the two-week window following the second dose to be considered fully vaccinated.

The Twins aren't scheduled to visit Angel Stadium again this season, and the Angels visit Minnesota for four games on July 22-25.