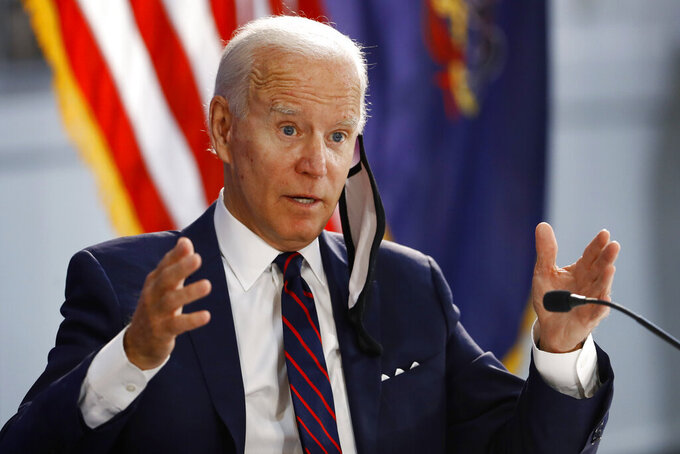 Days to next set of primaries (New York and Kentucky): 8

President Donald Trump makes his official return to the campaign trail this week. He's looking to improve his political standing after trying to navigate through nationwide civil rights protests, a public health crisis and related economic devastation that has defined the worst period of his turbulent presidency.

Saturday's rally in Oklahoma will no doubt turn out thousands of adoring supporters in a deep-red state, but it remains to be seen how he will address his weakness with independents, suburban women and people of color who will play a critical role come November.

Democrat Joe Biden, meanwhile, has begun to host small public events of his own, but for now he seems content to let Trump dominate the news cycle when so much of the news is grim.

Will Trump's return to the campaign trail backfire?

Lest there be any questions about the risks, the invitation to Trump's first rally since the pandemic began — in Oklahoma at the end of the week — includes a waiver absolving the campaign of any responsibility should attendees get sick.

That won't scare away Trump's die-hard loyalists in a state he won by nearly 37 percentage points, but it may raise new questions about his leadership among swing voters elsewhere as the nation faces the serious possibility of a surge of new coronavirus infections.

By some accounts, the new wave has already begun. A Washington Post analysis found double-digit percentage increases in confirmed cases across 16 U.S. states that have gradually loosened restrictions since Memorial Day.

When the Dow plunged more than 1,800 points last Thursday, Wall Street gave us a taste of how the market will react if anything gets in the way of America's economic comeback. It's fair to wonder whether voters would respond similarly if Trump can't help the economy improve dramatically by November.

African Americans and their allies forced political leaders in both parties to take them seriously following a period of intense social unrest. Now, the question becomes whether people of color will stay engaged for the next 141 days. History suggests that some of the energy may fade, although Trump's renewed defense of symbols of the Confederacy will certainly keep tensions running high.

Biden has embraced a series of public policy reforms, such as banning police choke holds, but he stopped short of endorsing some activists' calls to “defund the police.” He's also struggled to defend his support for the 1994 criminal justice law that imposed harsher punishments on people of color.

Who's winning the veepstakes?

Biden has significantly narrowed the list of women he's considering to serve as his running mate, we reported late last week.

Democrats with knowledge of the process said Biden's search committee is now considering as few as six serious contenders after the initial round of interviews. Among those in contention: Sens. Elizabeth Warren of Massachusetts and Kamala Harris of California, as well as Susan Rice, President Barack Obama’s former national security adviser.

The situation remains fluid. Biden, who has promised to pick a woman, is facing increased calls from Democrats to put a woman of color on the ticket — both because of the outsize role that black voters played in Biden’s road to the nomination and because of the reckoning over racism and inequality roiling the nation. Expect new details to continue trickling out in the coming days.

The clock is ticking. Biden says he hopes to announce his pick around Aug. 1.

We've seen disturbing trends emerge across several states that hosted primary elections in recent weeks. And it's unclear if state officials are willing or able to make the changes election experts say are necessary to ensure fair and free elections facing continued pandemic concerns in November.

In case you missed it, primary voters — particularly voters of color — have been forced to wait three, four and even five hours to cast ballots across battleground states like Wisconsin, Pennsylvania and Georgia. In Nevada last week, the final voter wasn't able to cast a ballot until 3 a.m. — eight hours after polls were supposed to close. Many voters also reported never receiving requested absentee ballots. And officials in multiple swing states struggled to report results in a timely manner.

Election experts are screaming for states to take major steps to address the concerns while urging the federal government to send badly needed resources. But with Election Day just 20 weeks away, it's unclear whether there is enough political will — especially among Republicans — to address the issues.

Trump's decision to move the Republican National Convention to Jacksonville, Florida, could be read many ways, but it clearly signals that the Republican president's political team knows Biden has a very real chance to win the state.

Trump has almost no path to 270 delegates without winning Florida. Not long ago, some political observers were asking whether Democrats would invest major dollars in Florida at all this fall given their relatively limited resources and the extraordinary resources required to play there.

There is a new recognition, however, that Biden's apparent strength among older voters could be a game changer. That's at least part of the reason why the political world will again descend upon the Sunshine State in the peak of hurricane season.