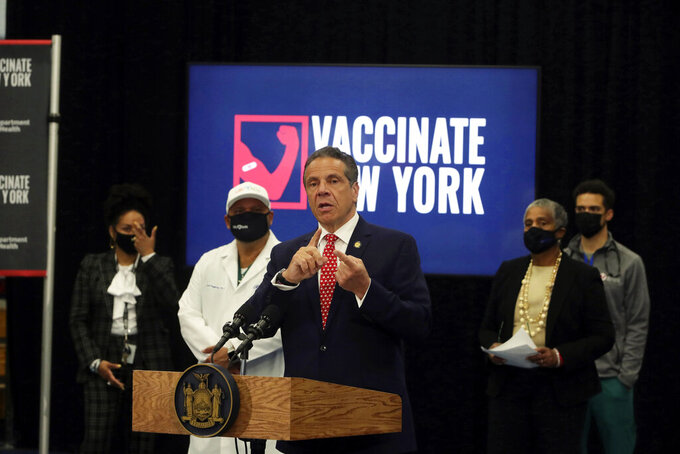 New York Governor Andrew Cuomo holds a press briefing on the coronavirus pandemic and urged people who are young and or hesitant to get vaccinated at the Belle Center, in Buffalo, N.Y., Thursday, April 29, 2021. (John Hickey/The Buffalo News via AP)

City subway service will return to 24-hour operation on May 17 after being closed for cleaning during overnight hours since the early days of the coronavirus pandemic last year, the Democratic governor said. More than 2 million people rode New York City subways per day in April — the highest level since COVID-19 cases surged last spring.

Current capacity restrictions on houses of worship and businesses — including restaurants, offices, beauty salons, gyms and hair salons — will be lifted in New York and its neighboring state of New Jersey on May 19, Cuomo said. Connecticut previously announced its own plan to do so.

But businesses will still have to limit how many people can enter their doors, according to Cuomo.

Businesses are still required to provide enough space for people to keep 6 feet of social distancing space, even after the limits based on overall capacity go away, the governor said.

Existing capacity rules for sports and entertainment events at large indoor and outdoor venues will also be eased in coming weeks. Cuomo said he wants to allow events, like baseball games, to welcome more people if all attendees are fully vaccinated or have a recent negative COVID-19 test.

New York City's subways, famous for all-night operation, were shut down between 1 to 5 a.m. on April 30, 2020, so trains and stations could be disinfected. The change was also intended to make it easier to remove homeless people from trains where many had been spending the night. The overnight closure was scaled back to 2 a.m. to 4 a.m. in February.

The leader of a union representing transit workers called the move a “great idea" but said the city must add more mental health services, homeless outreach and uniformed police officers to the transit system.

“Too many transit workers and riders are being harassed and assaulted right now with the current hours of operation,” Transport Workers Union Local 100 President Tony Utano said in a statement.

During an occasionally contentious MTA board meeting Wednesday, the NYPD’s transit chief recited statistics showing overall crime was down in the subways in the first quarter, and decried what she called “fear-mongering” by some officials.

But Interim New York City Transit President Sarah Feinberg, who oversees the subway system, countered that felonies and misdemeanors per million riders actually have risen since 2019 and that the current overall decrease is skewed by a drop in grand larcenies.

“Not everything that happens in the subway is reflected in these index crimes," Feinberg said.

“The city that never sleeps is slowly — but surely — living up to its name again and waking up from the COVID-19 pandemic, but so should the subway system, and ASAP,” Schumer, a New York Democrat, said at a news conference Sunday.

The decision to close the subways for cleaning was made a year ago when scientists placed greater weight on surface contamination as a vector of coronavirus infection than they do now.

Speaking at his New York City office near Grand Central Terminal, Cuomo said cleaning the system is still important though “not as urgent as they said it was initially.”

Cuomo, who controls the Metropolitan Transportation Authority that runs city subways and buses, said standards of cleanliness should remain high when the overnight closure ends. “You’re trying to build confidence for people to get back on the subways,” he said. “I want to know the subway is going to be clean."