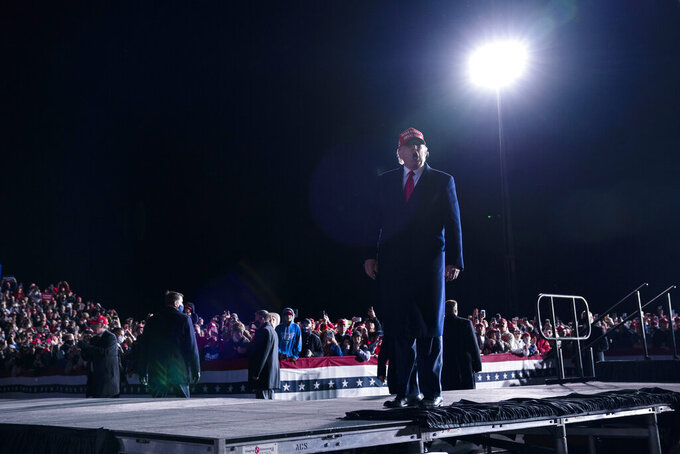 Loudermilk won a fourth term in the district, which includes all of Cherokee and Bartow counties and parts of Fulton and Cobb counties.

Loudermilk is an Air Force veteran, business owner and former state legislator who has been focusing on economic recovery with low taxes, less regulation and individual empowerment.

Barrett is a former radio and television host who said she was seeking affordable health care, equal economic opportunity as well as a reduced influence of money in politics.

She attacked Loudermilk, saying he voted against federal coronavirus relief and was downplaying the threat of COVID-19, including by not wearing a mask. Barrett raised a significant amount of money, but couldn’t overcome the Republican lean of the district.

The construction company owner was first elected in 2014 when he unseated Democrat John Barrow.

Allen has opposed efforts to expand health care coverage and federal education and social service programs. In July, he backed a bill to reduce federal education money for schools that didn’t provide an in-person educational option.

Johnson is a longtime party activist who was the unsuccessful Democratic nominee for state insurance commissioner in 2014. She campaigned on expanded health care, a higher minimum wage and protecting voting rights.

The district covers all or part of 19 counties in the eastern part of the state, stretching from Augusta as far south as Douglas.

Scott won a contested primary in the 13th District, which has an African American majority and includes parts of Clayton, Cobb, Douglas, Fayette, Fulton and Henry counties.

Scott in recent months has advocated for more money for COVID-19 relief as well as aid for medical workers. He has also advocated for gun control and extending broadband internet services.

Hites is a steel industry consultant who touted her business experience, saying she would work to attract industry and jobs to the district to increase economic vitality and would advocate for more career technical education to help workers build skills.

Also closely contested are two U.S. Senate races and House races in the 6th and 7th Congressional Districts in the Atlanta suburbs.

The second race is a special election for the remaining two years of a term originally won by now-retired Sen. Johnny Isakson. Kelly Loeffler, a wealthy Republican businesswoman, was appointed to the seat, and she is defending it in a field of 20 candidates. Other top contenders include Republican U.S. Rep. Doug Collins and Democrat Raphael Warnock, pastor of the Atlanta church where the Rev. Martin Luther King Jr. preached.

In either Senate race, if no candidate wins more that 50% of the vote, a runoff election will be held Jan 5. between the top two finishers.

Democrat Nikema Williams seeks to succeed John Lewis in the Atlanta-centered 5th District and is facing Republican Angela Stanton-King. Williams, a state senator and chair of the Georgia Democratic Party, wants to use federal power to provide more subsidized health care and guarantee voting rights. The 43-year-old Stanton-King, who was pardoned by the president for her role in a car theft ring that led to a 2004 conviction on federal conspiracy charges, says Trump is delivering economically for African Americans.

Democrat Lucy McBath is vying for a second term in Georgia’s 6th District and is running against Republican Karen Handel, whom McBath unseated in 2018. The race in Atlanta’s northern suburbs centers on arguments about health care, abortion, support for police and gun control. McBath crafts an image as a bipartisan worker, but Handel says she’s too liberal. McBath is hitting Handel over health care and Handel’s opposition to abortion rights. Handel says McBath’s advocacy for gun control makes her a “single-issue” candidate and says she’s out of touch with voters.

Republican Rich McCormick seeks to hold on to suburban Atlanta’s 7th District for his party as Democrat Carolyn Bourdeaux attempts to win a district she lost by fewer than 500 votes to retiring GOP Rep. Rob Woodall in 2018. McCormick, an emergency room physician, touts empowering business owners and individuals. Bourdeaux, a public policy professor, says government needs to do more to provide access to health care and solve people’s problems. The fast-diversifying district includes parts of Gwinnett and Forsyth counties and is one of the most closely watched races nationwide.

Republican Andrew Clyde beat Democrat Devin Pandy in an open seat in northeast Georgia after incumbent Doug Collins chose to run for U.S. Senate. Clyde touted his support of gun rights and his success in getting a law changed after the IRS seized $940,000 from him in 2013. Pandy pledged a bipartisan, little-guy approach, saying his priorities include better access to health care, a higher minimum wage and an end to tariffs. Clyde far outspent Pandy, with the gun dealer loaning his campaign more than $1.4 million.

Republican Marjorie Taylor Greene won election in an unopposed race in northwest Georgia’s 14th Congressional District after Democratic challenger Kevin Van Ausdal dropped out and left the state. Greene has expressed racist views and support for QAnon conspiracy theories. She was supported by President Donald Trump, who called her a “future Republican Star.” Greene has alleged an “Islamic invasion” of government offices and accused Jewish billionaire George Soros of collaborating with Nazis.

Republican Buddy Carter won a fourth term in Congress, beating Democrat Joyce Marie Griggs in the coastal 1st District. Carter said he would focus on economic recovery. Griggs said it was key to keep the Affordable Care Act in place, and sought more stimulus money for people because of COVID-19.

Democrats seek further gains in the Georgia General Assembly. They're focusing on the House of Representatives, where Republicans hold a 105-75 majority but Democrats gained 11 seats in 2018. A majority would give Democrats a voice in drawing Georgia’s voting districts for the next 10 years and enhanced bargaining power on priorities including Medicaid expansion.

Incumbent Republican Jason Shaw is being challenged by Democrat Robert Bryant and Libertarian Elizabeth Melton for a spot on the Public Service Commission. Republican Lauren “Bubba” McDonald’s reelection is challenged by Democrat Daniel Blackman and Libertarian Nathan Wilson. Winners must reckon with the impact of Georgia Power Co.'s $25 billion nuclear plant on power bills. The incumbents say they’re balancing consumer and utility needs, but the challengers say the balance is too tilted toward utilities.

Voters statewide will decide three ballot questions. State constitutional Amendment 1 would let lawmakers earmark funds for certain programs. Amendment 2 would let people sue governments for illegal acts, but judges couldn’t enter an injunction ordering a government to do something or order a government to pay money. Referendum A would exempt from taxes property owned by charitable groups such as Habitat for Humanity that sell homes to individuals through no-interest loans.