3 takeaways of AP review of COVID-19 in youth detention 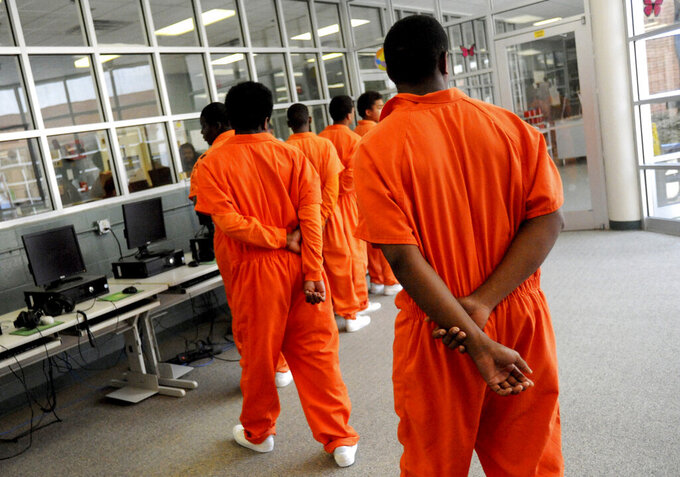 FILE - In this July 8, 2010 file photo, teenagers head toward the gym at Caddo Juvenile Detention Center in Shreveport, La. Fear and frustration is raging as fast as the coronavirus in some juvenile detention centers, with riots and escapes reported in hotspot facilities such as New York and Louisiana. (Val Horvath/The Shreveport Times via AP, File)

Fear and frustration is rising in some juvenile detention centers as the number of youth and staff infected by the coronavirus continues to mount, with riots and escapes reported in facilities in hard hit New York and Louisiana.

But as more and more state and local officials announce the release of at-risk inmates from the nation’s adult jails and prisons, parents, advocates for children's rights and criminal justice experts have been asking one question: Why aren’t more youths being sent home when the virus threatens their physical and mental health?

Key takeaways from an AP review:

America locks up more people than any other country in the world, with more than 2.2 million people behind bars. The juvenile population has seen a steady decline in the last two decades, in 2017 numbering at around 43,000, and around 70% of those youths are being held for low-level crimes. So compared to adults, finding out which kids can safely be returned home should not be a heavy lift. But it’s complicated.

In the juvenile justice system, not just the crime is taken into account, but factors such as family background and a child’s emotional development. Decisions are often not made at the state level, but instead carried out county by county with judges reviewing each juvenile case individually. In some places, children’s agencies play a role. The system was created to protect youths. But it can work against them during a crisis.

WHY ARE EXPERTS CALLING FOR RELEASES

Overcrowded and underfunded, America’s patchwork of jails and prisons are seen as breeding grounds for the coronavirus, and that poses a threat not just to the incarcerated, but society at large. Guards, administrative staff and contractors working inside facilities can carry the virus back into their communities.

Criminal justice and medical experts say the best way to control the virus’s spread is to reduce prison populations. Thousands of adults have already benefited from early releases. Some were being held on technical violations or were let out early because they were especially vulnerable — the elderly, for instance, and those with preexisting health conditions. Others were being held for technical violations or had just a few months left on their sentences.

To date, 150 juveniles and 283 staff have tested positive for COVID-19 at facilities nationwide, according to the Washington, D.C.-based nonprofit The Sentencing Project, which has been tallying cases for more than a month. Because so few facilities are carrying out mass testing — and others are not releasing numbers citing privacy concerns — the real number is believed to be much higher. And new outbreaks are reported almost daily.

Some kids with coronavirus symptoms are being thrown into isolation for 23 hours a day, in what amounts to solitary confinement. Many have been cut off from programs, counselors and school. Some have not been issued masks, social distancing is nearly impossible and they have been given limited access to phone calls home. In some states, authorities have been shuttling kids between facilities, trying to make sure sick and healthy young people are kept apart.