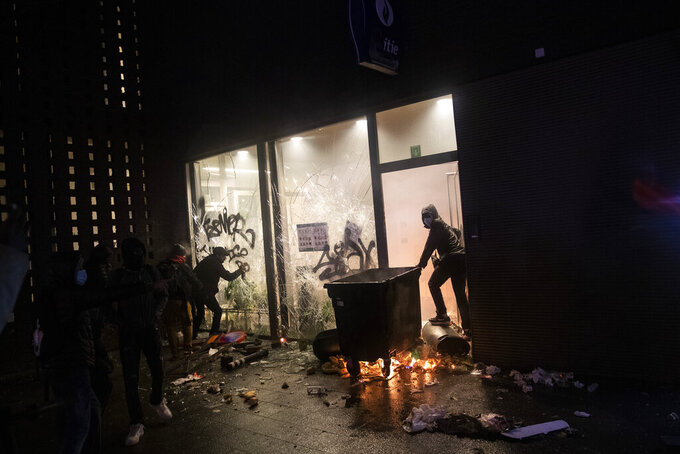 Protestors outside a police office in the Belgium capital, Brussels, Wednesday, Jan. 13, 2021, at the end of a protest asking for authorities to shed light on the circumstances surrounding the death of a 23-year-old Black man who was detained by police last week in Brussels. The demonstration in downtown Brussels was largely peaceful but was marred by incidents sparked by rioters who threw projectiles at police forces and set fires before it was dispersed. (AP Photo/Francisco Seco)

BRUSSELS (AP) — Four people, including two minors, remained in custody Thursday after a Brussels demonstration over the weekend death of a young Black man detained by police turned violent, the prosecutor’s office said.

A spokesman for the prosecutor's office said three of the individuals held were suspected of arson. The fourth has been accused of rebellion following the Wednesday demonstration, when police made more than 100 arrests,.

Police said most of violence took place after the largely peaceful demonstration by about 500 people — some holding Black Lives Matter signs — ended in downtown Brussels.

According to a police statement, 50 to 100 people remained on the spot and threw projectiles, set fires, damaged street furniture and police vehicles. They also smashed a window and a door at a police station. Several officers were injured, the statement said.

In all, 116 people were arrested, including 30 minors, and paramedics treated one civilian, police said.

Belgian prosecutors have requested that an investigative judge be appointed following the death of the 23-year-old Black man identified by authorities only as I.B. The prosecutor’s office said he was arrested on Saturday after he allegedly tried to run away from police who were checking people assembled in the city center despite COVID-19 restrictions on social gatherings.

He was taken to a police station where he fainted, and then transferred to a hospital, where he was pronounced dead, the office said.

“Justice must bring to court those who have vandalized and have injured five policemen, including a policewoman who is hospitalized,” federal police captain Marc De Mesmaeker told Belgian broadcaster RTBF on Thursday. “This must be done with care, just as the other aspect of the event, the tragic death of Ibrahima, must be treated with care.”

The prosecutor’s office said Belgium’s Comité P, an independent body overseeing police services, is investigating the man's death and a coroner has been appointed to perform an autopsy as well as toxicology tests. Belgian media reported the man had started to record the police with his phone when officers decided to carry out an ID check on him.

The prosecutor’s office said it has seized video surveillance images, both from the police station and at the scene of the man’s arrest.

Follow all AP stories on racial equality issues and police brutality at https://apnews.com/Racialinjustice.