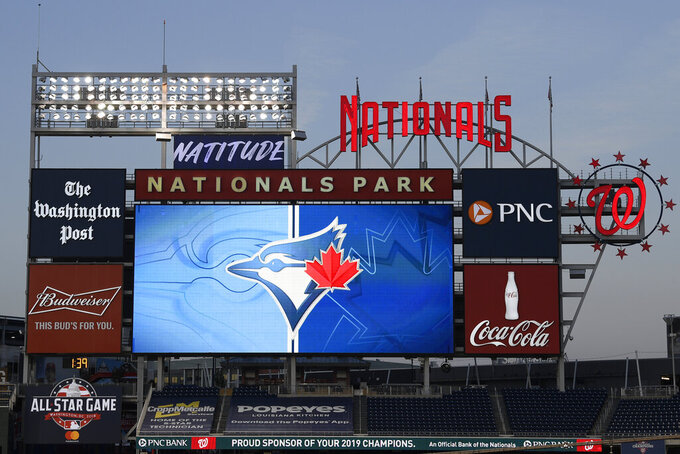 The Toronto Blue Jays' logo is displayed on the scoreboard during the middle of the eighth inning of the team's baseball game against the Washington Nationals, Wednesday, July 29, 2020, in Washington. The Blue Jays are the home team in the game. (AP Photo/Nick Wass)

WASHINGTON (AP) — Playing as the “visiting” team in their own stadium against the can't-play-at-home Blue Jays, Dave Martinez's Washington Nationals didn't even get the benefit of a boost from fake “cheering” by nonexistent “spectators” — those were reserved for Toronto's exploits Wednesday night.

So in this odd-as-can-be, upside-down, pandemic-altered season, the Nationals provided their own soundtrack of yells and claps and banging bats in a noisy dugout, reverberating through the empty yard.

Adam Eaton’s bases-loaded chopper broke a scoreless tie in the 10th inning on a close play and Asdrúbal Cabrera followed with a three-run triple, helping the Nationals snap a three-game losing streak by beating the Blue Jays 4-0.

“They got really loud,” Martinez said after his team's scoring output in the 10th equaled what the 2019 World Series champions managed to put together in the previous three games combined. “They love to win — and they love to celebrate.”

There were elements that made clear where this game was played: the giant curly “W” painted behind home plate; the heart with the letters “DC” cut into the outfield grass; the Nationals in their usual dugout.

Toronto's Nate Pearson, in his big league debut, and Washington's Max Scherzer, in his 358th start in the majors, put up plenty of zeros. So did the relievers that followed.

“It was cool to see him competing out there. It’s definitely something I’ll look back on my debut and say: I was able to match up with Max Scherzer and held my own for five innings,” Pearson said.

In the top — yes, top — of the 10th, though, Washington moved ahead. After starting with the automatic runner on second base — one of the many quirks of a season unlike any other — Washington loaded the bags with two walks from Toronto’s sixth pitcher, Shun Yamaguchi (0-2).

After two strikeouts, Eaton bounced a ball off the mound. Second baseman Cavan Biggio grabbed it and tried to dive glove-first at the bag, but was edged out by runner Andrew Stevenson. After a replay review of more than two minutes, the “safe” call was upheld, making it 1-0. Until then, the Nationals were 1-for-16 in 2020 with runners in scoring position and two outs. Cabrera then made it two hits in a row in such situations.

“We needed this win,” Scherzer said. “We needed to get some mojo going.”

The 6-foot-6, 250-pound Pearson, a 2017 first-round draft pick, went five innings, gave up two hits and struck out five, relying mainly on a fastball that touched 99 mph and a terrific slider.

“He was outstanding,” Toronto manager Charlie Montoyo said. “He was fun to watch.”

On the last, Scherzer walked No. 9 hitter Derek Fisher, putting runners on the corners with one out. Daniel Hudson (1-0), who closed out Houston in Game 7 of the World Series last October, got the job done, with the help of a diving stop and backhanded flip by shortstop Trea Turner that started a 6-4-3 double play Martinez called “awesome” and “unbelievable.”

The Blue Jays’ giant blue logo was displayed on the scoreboard — right below the white block letters spelling out “Nationals Park” — during batting practice. And all of the manufactured crowd noise piped through the speakers offered “cheers” when Toronto did something good.

Except this game was played nearly 500 miles — or, in the metric system, about 775 kilometers — south of Toronto’s Rogers Centre, which is off-limits because Canada’s government did not want teams traveling in and out of there from the United States.

The Blue Jays will be using a minor league ballpark Buffalo, but that’s still being upgraded to host major league games.

Asked about the quirkiness of playing a game as a “visitor” at home, Scherzer said: “It didn't bug me whatsoever. I know how to pitch on the road. 2020 is a weird season. We all knew it.”

Nationals LF Juan Soto is still waiting to be cleared to play by the city government after getting the OK from Major League Baseball to return from the COVID-19 injured list.

Nationals: DH-1B Howie Kendrick was scratched with a stiff back.